Despite bright beginning, ‘no' campaign struggles at the last bend 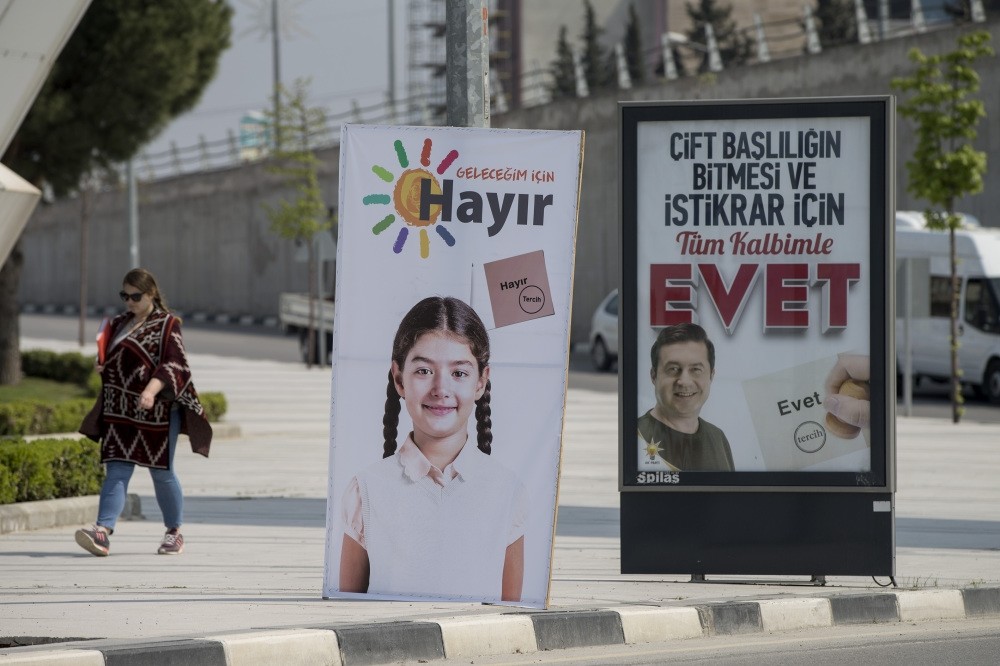 The ‘yes' and ‘no' campaigns, which kicked off after President Erdoğan ratified constitutional changes on Feb. 10, are appealing to citizens in their own way. While the ‘no' campaign started off better in the beginning, the ‘yes' campaign has outpaced it recently by opening new dialogue channels

The race for the "yes" and "no" campaigns had kicked off on Feb. 10 when President Recep Tayyip Erdoğan signed the constitutional amendment, steering Turkey into a referendum process and, with less than five days left until the crucial ballot, Daily Sabah took a look at the efforts of two campaign fronts over the course of the last two months.

While the Justice and Development Party (AK Party) and President Erdoğan have been leading the way in the "yes" campaign, the Republican People's Party (CHP) has made efforts to persuade people to vote "no." Citizens have been getting used to seeing Erdoğan, AK Party Chairman Binali Yıldırım and CHP Chairman Kemal Kılıçdaroğlu appear on TV every day at rallies. Streets, avenues and squares are also emblazoned with banners, flags and posters. Anybody wanting to participate in the referendum campaign, in favor of either the "yes" or "no" camps, can set up tents or distribute brochures on the streets as well.

Looking at the two sides' main visuals, the "no" camp has used a little girl on its campaign banners, standing next to a colorful sun. "No for my future," the banner reads.

The "yes" campaign stresses the will of the people on the banners. Also, the AK Party focuses on "unity, an independent and impartial judiciary, a stronger economy and a bigger Turkey as well as more investments and more production," on the boards.

Banners displaying a picture of President Erdoğan underscore that the people will have the ultimate say and decision.

Both camps are using Jingles and poems in their campaigns. While the no camp plays the main jingle, titled, "Come get rid of it [the constitutional amendment] with a no," in its campaign, the yes camp uses the jingle, "A strong Turkey with a yes" that appeals to the people with the notion of unity and togetherness.

A video, in which President Erdoğan reads a patriotic and emotional poem, calling on people to vote yes, was also aired recently.

"The 'yes' campaign is a summary of past AK Party election campaigns," she contended.

Arguing that the "no" campaign has opted to remain relatively silent and calm at the beginning of the propaganda period, Sözen said that it paid off at first.

İsmail Çağlar, director of public and media researches at the Ankara-based think thank, the Foundation for Political, Economic and Social Research (SETA), and an academic at Istanbul Medeniyet University, is also of the opinion that the "no" campaign carried out more of a soft propaganda in the beginning.

"The CHP determined a successful strategy. They did not take the 'yes' campaign as an enemy. It was clever, but it needed skills to retain it," Çağlar said.

Kılıçdaroğlu has recently been making headlines due to his controversial statements, unlike his mild approach at the beginning of the referendum period. The CHP leader drew heavy criticism after he claimed that the July 15 coup bid was a "controlled coup attempt."

Sözen stressed that the AK Party and Erdoğan have always had a certain type of strategy that addresses every segment of the country.

Çağlar expressed his observation that the AK Party has a two-legged strategy.

"The AK Party talks about the services it has provided and they craft an emotional synergy," he said, adding that this strategy has run smoothly so far.

The proposed law gives executive powers to the president and vice president while abolishing the post of prime minister.

It also lowers the age of candidacy for Parliament from 25 to 18 and increases the number of parliamentarians from 550 to 600 in accordance with the country's growing population. The number of members of the Constitutional Court will also be decreased from 17 to 15.

In the new system, Parliament will have the power to discuss and change executive decrees, and it will be able to take the country to parliamentary elections and presidential elections, according to the yes campaign.

Also, executive decrees issued during the state of emergency will have to be discussed in Parliament within three months.

Aside from the change to an executive presidency, other reforms include allowing the president to maintain party political affiliation. President Erdoğan, for example, has been dwelling on this change in particular at rallies.

Sözen underlined that yes votes have been on the rise as the country draws near to the referendum.

Pointing to Erdoğan's rallies for the increase in the number of yes votes, she said, "Erdoğan is a significant actor in the process. His rallies changed the picture."