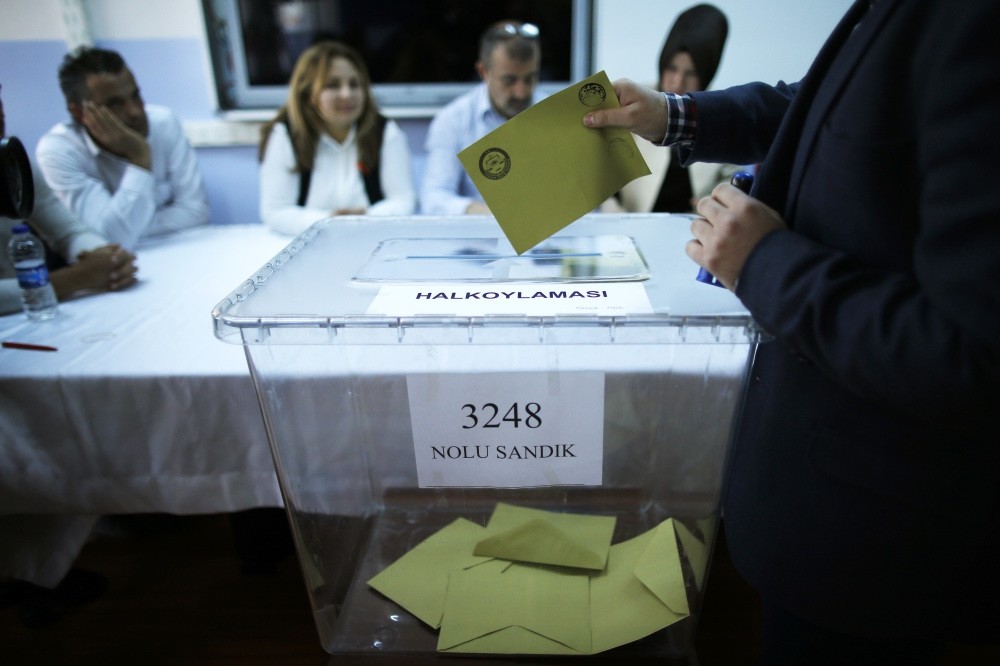 President Erdoğan and Justice Minister Bekir Bozdağ said the decision given by the Supreme Election Board (YSK) regarding unstamped ballots was appropriate, as a response to the debate over the validity of the April 16 referendum result despite the top election body's decision

The debate over the validity of the April 16 referendum results has dominated discussions in Turkey's legal and political spheres lately. Some have even delved into the top election body's decision, saying that the results were not clean and could further be challenged through alternative legal means. Amid ongoing debates, Justice Minister Bekir Bozdağ, speaking to private broadcaster A Haber yesterday, said the decision by Turkey's Supreme Election Board (YSK) regarding unstamped ballots was appropriate. He further added that neither the European Court of Human Rights (ECtHR) nor the Constitutional Court had authority to rule over the referendum result, according to the Constitution.

Meanwhile, speaking on the issue on A News TV broadcaster yesterday, President Erdoğan said the YSK's decision put an end to the annulment discussions, since the issue is outside the jurisdiction of both the European Court of Human Rights (ECtHR) and Turkey's constitutional court.

President Erdoğan also criticized the report by The Organization for Security and Co-operation in Europe (OSCE) and the EU bloc's stance against "yes" voters, saying, "Terrorists are freely campaigning in European states when our ministers were not allowed to meet the Turkish people living there." He added that the OSCE is supposed to be impartial and independent, but seeing observers with PKK banners, their impartiality is not convincing.

An official report signed by ballot box officials in Istanbul's Ümraniye district on April 16, showed that opposition Republican People's Party (CHP) member Hasan Çelik and Peoples' Democratic Party (HDP) member Olcay Emir had accepted that though the ballots were not stamped, they were indeed authentic.

The YSK on Wednesday rejected appeals by the CHP, HDP and the Patriotic Party (Vatan Partisi) to cancel the April 16 referendum results over a debate regarding unstamped ballots, and a look at previous election decisions showed that this was not the first time.

Responding to questions by a member of the media regarding the CHP's criticisms of the election board yesterday in Ankara, YSK President Sadi Güven said, "I am not a politician, I am a judge therefore I will not respond [to the criticisms]."

On April 16, the historical constitutional amendment package was approved by the people of Turkey, after it racked up some 51.4 percent of votes in a referendum. However, the main opposition party the CHP has refused to accept the people's decision and said it will follow every possible legal ways to challenge the result.

On that note, Bozdağ reminded the CHP that the laws were clear on the matter.

"Our Constitution explicitly rules that the YSK's decisions are final, and no authority can be resorted to challenge these decisions. Even if such an application was made, the Constitutional Court has no choice but to reject it," he said.

Urging the CHP to respect the people's decision, Bozdağ said the CHP will not get any result if they take YSK's decision to the Constitutional Court or the ECtHR, as neither of them has jurisdiction.

"They [CHP] can also apply to the ECtHR, but it won't get any result there either, because the agreements signed with Turkey do not give parties the right to apply," Bozdağ added.

Giving examples of similar instances where the ECtHR's inability to overrule a country's referendum decisions was evident, Bozdağ said: "In 1975, the U.K.'s referendum on the European Union was taken to the ECtHR and the court rejected the application by stating that it was beyond their authority. Similarly, in 1994 Finland's EU referendum results were also taken to the ECtHR, and again the court rejected the application, saying that they do not have authority over public votes."

He continued further and criticized the Organization for Security and Co-operation in Europe (OSCE) for sending biased and prejudiced observers to monitor the elections.

Bozdağ noted that some of the observers were affiliated with the PKK, which is recognized as a terrorist organization by the U.S., EU and Turkey.