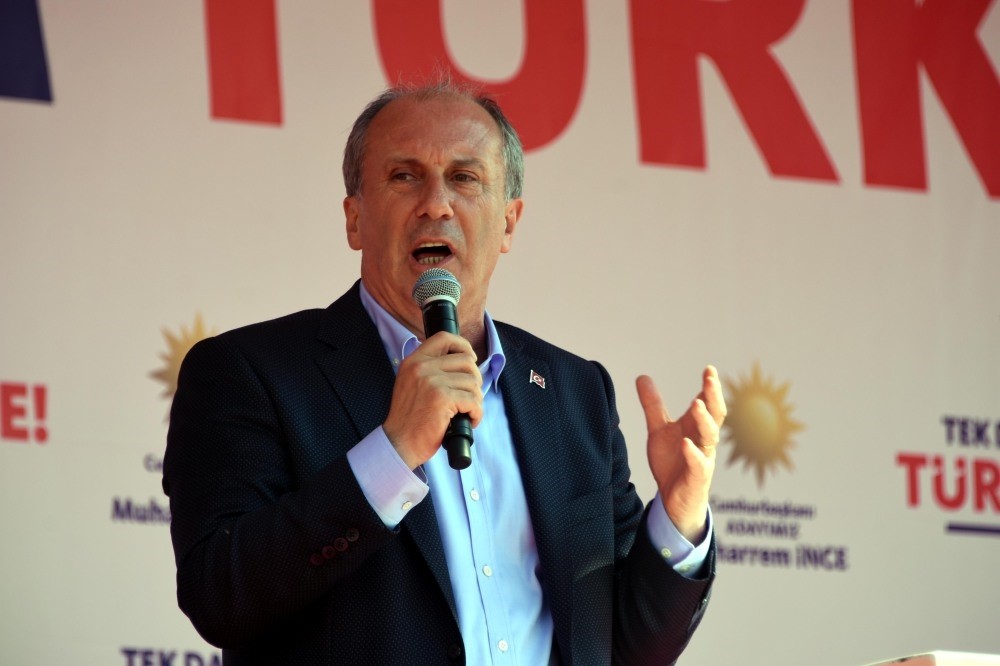 The main opposition CHP's presidential candidate Muharrem u0130nce delivers a speech in western Edirne province, May 10.
by Özgenur Sevinç May 11, 2018 12:00 am

Caught off guard by the early parliamentary and presidential elections, the main opposition CHP has been making moves to leap forward; however, such strategies have not yielded substantial results so far

The upcoming elections in June places great responsibility on the shoulders of candidates to present their best efforts in order to be elected as president, however, experts argue that the main opposition Republican People's Party (CHP) has yet to follow effective strategies as its maneuvers so far appear unsuccessful. "CHP does not present a new rhetoric for the elections that would resonate with people but promises undoing what was put in place," Mahmut Övür, a Sabah columnist said and added that "CHP ends up adopting self-destructive policies." Övür stressed that the CHP has been taking steps aiming to challenge the ruling Justice and Development Party (AK Party) by increasing the number of rivals against it, referring to the recent incident in which 15 CHP deputies transferred to the Good Party (İP).

CHP transferred its 15 deputies to the far-right İP which had five deputies, to ensure its participation in elections scheduled for the June 24 elections. The deputies returned to the CHP Thursday on the grounds that "they fulfilled their duties." In relation to the issue Deputy Prime Minister Bekir Bozdağ said that the incident "was a stain on Turkey's democracy." "CHP defines its move as a contribution to democracy, however, it does not appear to be a rational strategy considering the possibility of a shift in CHP voters toward the İP, a newly established party," Şakir Dinçşahin, an academic from Hasan Kalyoncu University, stated.

The underlying reason for CHP's strategy was that the İP might face a possible veto from the Supreme Election Board (YSK) since the party was recently established and did not meet the requirements to participate in an election.

The transfer of 15 deputies from the CHP to the İP allowed the latter - having five deputies at the time - to reach 20 deputies in Parliament, thus meeting the condition of having 20 deputies to form a parliamentary group and participate in the elections.

A candidate for presidential elections should either be nominated by political party groups in the parliament - meaning at least 20 deputies - from political parties that obtained at least 5 percent of the vote in the last parliamentary elections or 100,000 voters, according to Article 101 of the Constitution.

İP Chairwoman Meral Akşener had previously announced that she will run with 100,000 signatures backing her candidacy instead of nomination by her party's group. Akşener collected enough signatures and become a candidate, in a way ignoring the CHP's move, which propelled the return of 15 CHP deputies.

Dinçşahin also stressed that CHP's possible strategy in mind to nominate a joint candidate with İP following its favor was also undermined by Akşener's decision to run for president.

When political parties' negotiations to nominate a joint candidate that will run against Recep Tayyip Erdoğan in the elections did not yield any results, İP and the Felicity Party (SP) nominated their party leaders as candidates.

After a long search, the main opposition CHP also nominated candidate - Yalova deputy Muharrem İnce, an intraparty rival to Chairman Kemal Kılıçdaroğlu. Kılıçdaroğlu said earlier that the party's candidate would be someone with an economic background, who has strong acumen in the field, and also someone who will not engage in polemics and harsh discussions during the campaign period.

İnce did not meet the criteria announced by Kılıçdaroğlu and the party face some criticism that the decision made since the party left a bereft of options.

Commenting on the rhetoric of İnce, Övür said that "all he suggests is torpedoing, undermining what was previously done."

Övür criticized İnce for not offering any other policies that would replace previous ones.

Touching on CHP's other strategies, Övür pointed to the CHP's recent contacts with the pro-PKK Peoples' Democratic Party (HDP) "with the aim of increasing the votes of the party to undermine the success of AK Party."

As many argue that this causes irrevocable damage to the image of party, he also said that the CHP harms itself with the move. On Wednesday, the CHP's presidential candidate visited the co-chair of the HDP, Selahattin Demirtaş, who is in prison in Edirne. In November 2016, 13 HDP lawmakers were arrested, and 10 of them, including HDP's co-chairs Demirtaş and Figen Yüksekdağ, remain in custody awaiting trial on charges related to membership, leadership and committing crimes for the PKK terrorist group.

"I am not going to alienate anyone. I want to make an appointment with all the presidential candidates in the opposition when we start the campaign. I plan to visit Doğu Perinçek, Meral Akşener and Temel Karamollaoğlu, as well," İnce said on Sunday.

Meanwhile, Dinçşahin stated that "the nationalist CHP supporters have been disturbed by these close contacts with the HDP." He added that the CHP conducts these efforts considering the possibility that the elections will seep into the second round. However, he stressed that this strategy would cause a loss for the CHP's votes in the first round.