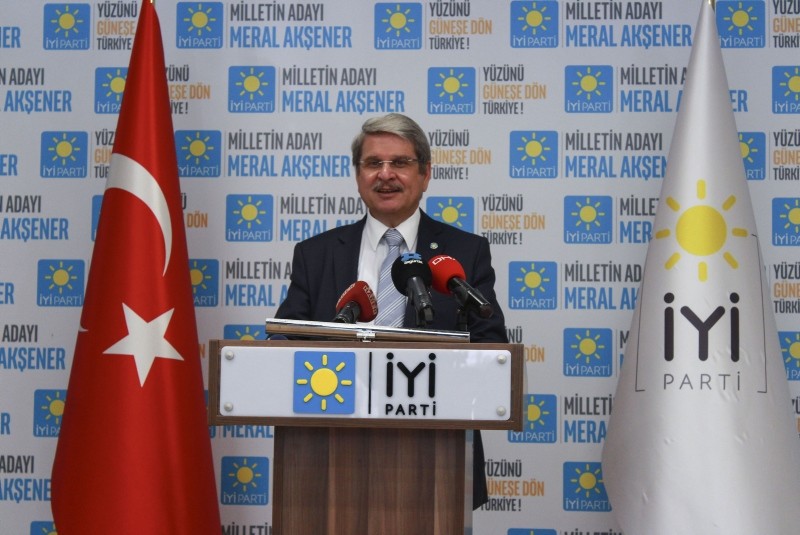 Party leaders from the opposition's electoral alliance declared an end to their political cooperation only 10 days after the June 24 elections.

The center-left secularist Republican People's Party (CHP), the right-wing Good Party (IYI Party - IP), the Islamist-conservative Felicity Party (SP) and the center-right Democrat Party (DP) had established the Nation Alliance, with the latter represented in IP's lists. The alliance received 33.9 percent of the votes, suffering a defeat against the ruling Justice and Development Party (AK Party) and the Nationalist Movement Party's (MHP) People's Alliance, which received 53.7 percent of the votes.

Aytun Çıray, the spokesman for the IP, said Wednesday that the Nation Alliance was meant for the elections and there is no need for it now that they have been concluded.

Speaking after the IP's executive board meeting, which was also attended by the party's Chairwoman Meral Akşener, Çıray said the possibility of early local elections is low amid Turkey's social and economic problems but the party is ready in any case.

Regarding the main opposition CHP's reluctantly open stance for early local elections, Çıray said, "The CHP might have brought up the early election concept to postpone its own problems. Our cooperation was not a coalition, it was an election cooperation. We had established an electoral cooperation, an alliance against election irregularities, for votes not to be swept aside."

He added that the IP will pursue its own political agenda.

Çıray, a former CHP deputy who switched to the İP after its foundation, was referring to the intraparty leadership debate in the CHP between Chairman Kemal Kılıçdaroğlu and presidential candidate Muharrem Ince.

His remarks confirmed expectations that the alliance will be short lived and would not last for much longer after the elections.

He also touched upon increases in a number of goods and services, saying that the government would not likely raise prices if it was considering early local elections.

Regarding claims of possible cooperation with the AK Party and the MHP in Parliament, which fall short of the majority required for constitutional changes, Çıray said that IP will show a constructive opposition stance.

In a press conference in party headquarters in Ankara, Karamollaoğlu said, "The alliance was about the general elections, it expired at that point."

He added that there will be no electoral cooperation in local elections.

In an interview on Wednesday, Kılıçdaroğlu claimed overall success in the elections and underlined the Nation Alliance as one of the successful points.

To avoid a possible veto by the Supreme Election Board on the newly-established İP's participation to the snap elections, the CHP had transferred 15 deputies to the IP to help them to form a parliamentary group and earn the right to participate in the elections. The move had caused controversy and drew mixed reactions from the public, with some saying the move was successful, while others slammed the CHP for breaching political ethics.