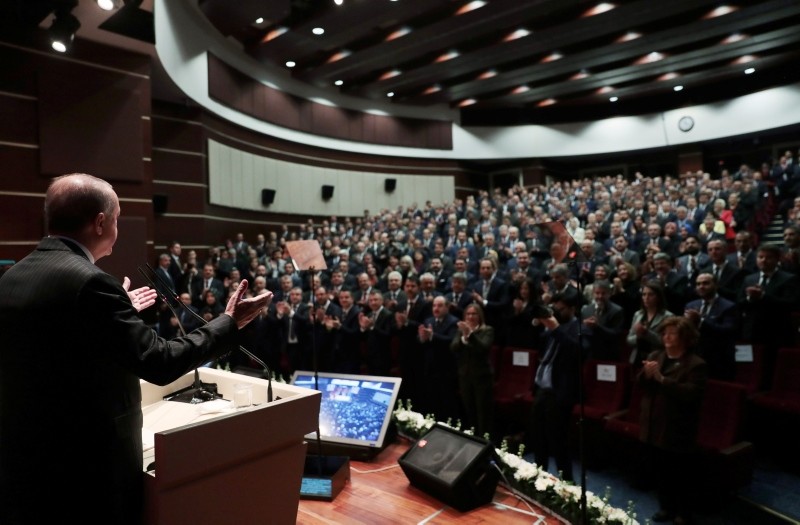 Erdoğan's remarks came at a meeting at the party headquarters i capital Ankara, in which he announced candidates for one large metropolitan municipality and 13 provincial municipalities for the local elections slated for March 31, 2019.

Noting that the party has distributed a vast amount of flags and posters as a demonstration of political power in every election campaign, Erdoğan said it could serve as an excuse in periods when mass communication tools were limited.

"There is no need for it today. We find this very primitive. Old campaigning methods have been polluting our cities," the president said during the AK Party provincial heads meeting in Ankara.

In the 2019 campaign, AK Party officials across Turkey will only be allowed to hang banners and flags at the party's offices and visual pollution will not be tolerated, he added.

According to Erdoğan, the party will concentrate more on effectively using the internet and social media in a bid to attract more voters.

He also revealed the names of 14 more candidates for mayorship in the local elections, including the provinces of Aksaray, Ağrı, Bilecik, Erzincan, Edirne, Iğdır, Isparta, Kars, Kırşehir, Kütahya, Siirt, Tunceli, Van and Zonguldak.

The names announced so far point to a large-scale renewal by the AK Party on a local scale with the party sticking to its three-term limit. Out of the 74 names announced so far, only 17 are incumbent mayors, and among those names are several mayors who took over during the AK Party's rejuvenation bid in late 2017 and others who replaced outgoing mayors elected to Parliament in the June 2018 presidential and parliamentary elections.

The only remaining provinces where the AK Party is yet to announce mayoral candidates are the metropolitan municipalities of Istanbul, Adana, Mersin, Manisa, Aydın and Muğla and the provincial municipality of Osmaniye. Except for Istanbul, where Parliament Speaker and former Prime Minister Binali Yıldırım is largely expected as the ruling party's candidate, all other provinces are reportedly being considered for joint candidateship with the Nationalist Movement Party (MHP) as part of their People's Alliance. The MHP won the 2014 local elections in Adana, Mersin, Manisa and Osmaniye provinces.

Here are the candidates revealed by Erdoğan on Thursday: