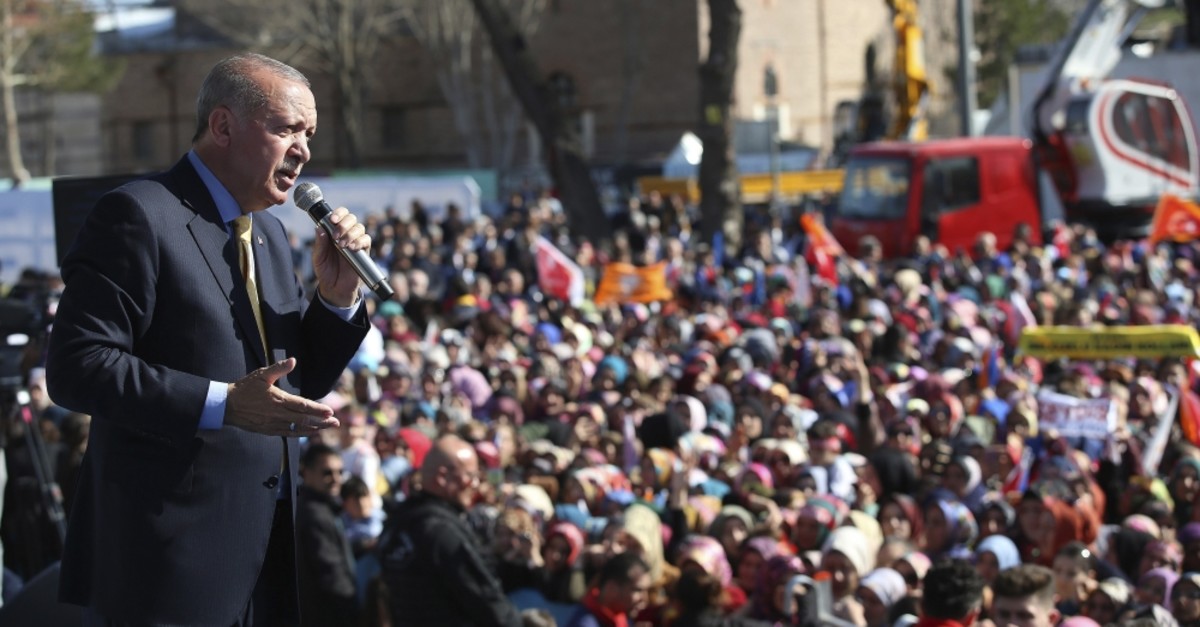 President Recep Tayyip Erdoğan, the chairman of the ruling Justice and Development Party (AK Party), said on Friday that the AK Party belongs to the people and no one showing arrogance toward the people can stay in the party. For the upcoming local elections slated for March 31, Erdoğan called on people to stand by the AK Party. Speaking in an election rally in Konya province, Erdoğan highlighted, "The AK Party is a party which puts its objective at the center and is able to renovate itself around this objective." He underlined that the only owner of the AK Party is the people and added, "I call on people to stand by their own party on March 31." Erdoğan underscored that "the AK Party will never turn into those parties which have no identity or vision." Konya has always been considered as one of the strongholds of the AK Party, giving the fewest votes to the opposition parties.

In the June 24 presidential and parliamentary elections, for instance, an overwhelming 74 percent of the people in Konya voted for Erdoğan, while the candidate of the main opposition Republican People's Party (CHP), Muharrem İnce, received only 13.7 percent.

The People's Alliance formed by the AK Party and the Nationalist Movement Party (MHP) also garnered 74 percent of votes while the Nation Alliance was only able to attract 21 percent of the votes in the same election. The same tendency was present in the 2014 local elections as well with AK Party receiving 60 percent while the CHP had 6.6 percent.

In relation to the upcoming projects for Konya province, Erdoğan said that he will closely follow the implementation process of the new projects planned in Konya province.

He pointed out that in the 17 years of the AK Party governments, a total investment of TL 51 billion was made in the province and underlined, "I will watch closely the implementation of projects particularly the subway project that are of great significance for the future of the city."

Referring to the AK Party's services in recent years, Erdoğan said that 8,000 new classes for education were built. Five new dormitories with capacity for 7,550 people will be opened as well. Two new state universities were established in Konya. Ten youth centers were opened along with many sports centers and swimming pool. Highlighting that the Meram people's garden was established, Erdoğan said that two new people's gardens will be built. In relation to the services in transportation, Erdoğan said, "Our objective is to provide high-speed rail lines in 29 provinces until 2023."

"We will have a new rail line project in Konya," he added. Announcing another project for Konya, Erdoğan said that a factory for remote weapons systems will be established by ASELSAN. He stressed that $65 million in investments will be made and this step will also provide employment to a large number of people in the region. Erdoğan highlighted that this company will both contribute producing of domestic weapons and pave the way for exporting them.

In the rally, Erdoğan also criticized the recent remarks of the Good Party (İP) Chairwoman Meral Akşener who targeted him, claiming that he called people "terrorists." Regarding the issue, Erdoğan stated that she will pay the price for her baseless allegations following the elections.