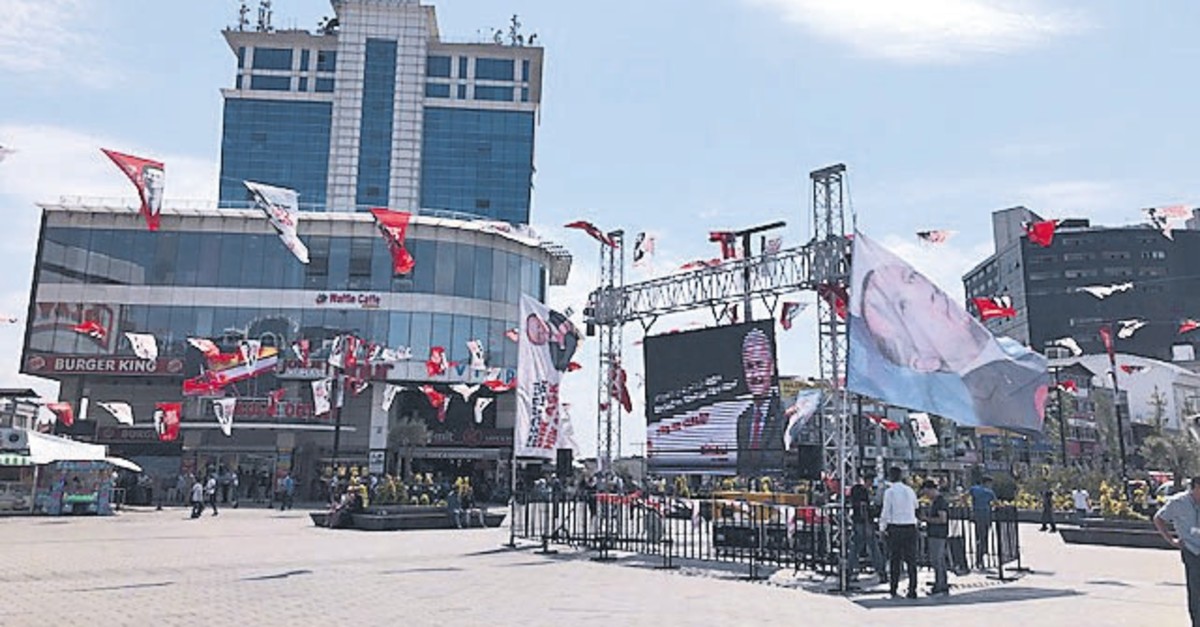 The upcoming redo mayoral election in Istanbul has topped the political agenda in Turkey for weeks. When asked about voters' expectations from their next mayor and municipality, people expect much more than a municipal election, raising their demands and problems. While a few of these expectations are directly related to the municipal administration, most are problems too big for a local administration to solve.

In Kadıköy, a main opposition Republican People's Party (CHP) stronghold known for its secular and relatively wealthy population, people mostly voiced their expectations about social issues to be solved by the new municipality, although these issues do not necessarily affect them personally.

On the other hand, residents in Üsküdar and Esenyurt, more conservative districts with relatively lower socio-economic standards, complained about their own problems from their own life experiences.

As the cultural and economic capital of the country, Istanbul has more than 16 million residents. Thus, the elections in Istanbul represent more than a municipal election, affecting the entire nation.

One observation we made as we walked around to understand the demands and expectations of the districts' residents for their next mayor and municipality is that people are exhausted with the frequent elections because people think that successive elections harm political and economic stability, making society more politicized. Also, some related economic problems with the intensive election calendar. Voters in Istanbul will go to the polls this weekend for the sixth time in the last four years.

Fifty-six-year-old Dilek, living in Kadıköy, complained about frequent elections' negative effects on the national economy. According to 38-year-old Servet in Esenyurt, the reason why there are economic problems is that there are elections, which he claims, cause a slowdown in the market.

"Our biggest problem is the elections. It reflects on businesses. Besides, the politicians are visiting door to door during the election time. However, when the elections are over, they go missing," he said.

Following the March 31 election, President Recep Tayyip Erdoğan initially announced that no elections were planned until 2023, as there had been frequent elections in recent years. However, as suspicions over irregularities started to emerge regarding the municipal polls, the ruling Justice and Development Party (AK Party) demanded a recount of the votes – which was rejected by the CHP. After the CHP rejected the suggestion to clear the suspicions, the Supreme Election Council (YSK) decided to annul the elections and redo the polls on June 23.

People open for listening to candidates

Although society gets very involved in politics due to frequent elections, we did not observe high levels of partisanship. People expect their demands to be listened to, but they are also pessimistic about solutions.

Sixty-four-year-old Hanife, living in Üsküdar, said that she had to confront the municipality itself, even throwing herself in front of the municipality authorities at one point. "Still I do not resent any political parties or candidates. I like them all because I know that they work hard," she added.

Since 1994, when Erdoğan was elected as the mayor of Istanbul Metropolitan Municipality, the commercial capital's municipality has been under the rule of the same political line. However, before his mayorship, the city's condition was in bad shape and issues such as garbage disposal, water problems and electricity caused many to suffer.

"I have to say that due to what I've been through over the years, I have no expectation from any of them," she said."

Cem, 28, living in Üsküdar, is another citizen who does not expect any solution from political parties. "I do not believe in elections and do not support any political party. I do not think that any one of them can be the solution to our problems," Cem said, underlining that both the Justice and Development Party (AK Party) and the CHP are the same for him.

Economic problems, especially unemployment, are one of the biggest concerns people agreed on. Esenyurt, a district known for its significant Kurdish and refugee population with relatively lower socio-economical standards, suffers a lot from unemployment and economic problems.

"Everything is a problem," said 53-year-old İsmet, living in Esenyurt. "The retired are suffering, the workers are suffering. We cannot find any jobs; we don't have money in our pockets. The only thing we hear about is elections."

Fifty-five-year-old Kemal also complained about the same issue as his retirement income was not enough to feed his family. When asked about the reasons of these problems, Syrian refugees are scapegoated for almost everything.

"Syrians are a major issue here," said 33-year-old Muhammed, a young man who has also been suffering from unemployment. İsmet was clear about the solution: "I only want the Syrians to go back, that's all."

Turkey is home to more than 3.5 million Syrian refugees under temporary protection status along with some 72,000 others, who were granted Turkish nationality. Istanbul has the largest number of refugees in Turkey with almost 560,000. Esenyurt also hosts a large number of refugees, more than most of Istanbul's other districts. According to a 2017 report, the district, with more than 740,000 residents, is home to almost 30,000 refugees. The civil war in neighboring Syria has additionally saddled Turkey with the task of addressing challenges stemming from the ongoing crisis. Pursuing an open-door policy, Turkey received a constant flow of displaced Syrians fleeing the conflict. Regarding the situation of Syrian refugees living in Istanbul, Yıldırım had said: "Syrians living in Turkey are under temporary protection. They will return home. Nearly 500,000 people returned to areas liberated from terrorists by Turkey and more will leave after area east of Euphrates River is cleared." He also said Syrians living in Istanbul who disturb the peace or engage in illegal activities would be apprehended.

Nobody sure how to solve problems due to over-crowding

For elderly citizens, over-crowding is a major problem. They miss the old days of Istanbul. For Can, 65, who runs a small tobacco shop with his wife in Kadıköy, the overwhelming crowds are the biggest problem, and he is pessimistic about municipalities and the metropolitan municipality being able to solve the problem. "There is freedom of travel. You can't impose a visa to enter Istanbul," he said.

Perihan, a 46-year-old woman living in Üsküdar, shares common problems with a longing for the city's old days.

"I was born and raised in Istanbul. It was a beautiful, peaceful city back then. However, now, there are foreigners and tourists everywhere. I'm not saying that they should not come but still I miss the good old days of Istanbul," she said.

Traffic and problems in transportation due to the huge population of the city are other major issues that make people pessimistic about solutions.

Serhat, 26, who was rolling tobacco during his break in front of the cafe where he works in Kadıköy, listed traffic and education as the two most important problems of Istanbul. When asked how to solve these two problems, he paused and said: "I cannot think of a solution for traffic, neither can the municipality." In another example, 24-year-old Enes had similar complaints: Crowds, traffic and unplanned urbanization. What Enes said about unplanned urbanization is another shared complaint among citizens.

Due to this massive problem, the metropolitan municipality mayoral candidates frequently promise to find a solution; AK Party candidate Binali Yıldırım previously emphasized that the most persistent problem is the massive volume of traffic and that there are 770,000 parking lots in Istanbul, but a lot more are needed. Stressing that he is determined to transform Istanbul into a world brand, Yıldırım pledged to solve the city's notorious traffic problem, while mentioning his previous projects carried out while he was transportation minister.

According to the traffic index published by TomTom, which monitors traffic densities of big cities around the world, the traffic congestion in Istanbul is on the decline despite the continuous increase in population and the number of vehicles in the city. According to a recent survey by TomTom, Istanbul's traffic congestion fell from 59 percent in 2017 to 53 percent in 2018. Thanks to the Istanbul Metropolitan Municipality's ongoing rail system projects, it is envisaged that the traffic congestion will be further relieved in coming years. Smart transportation systems, rail systems and interconnected public transportation services undertaken by the Istanbul Metropolitan Municipality with the vision of smart urbanization have relieved Istanbul traffic to a great extent.

Istanbul, Turkey's most populated city with more than 15 million inhabitants is notorious for its massive traffic and more motor vehicles (over 4.1 million) than any other city in Turkey. As the country's economic capital, Istanbul attracts migrants from all over the country. In the early industrialization phases of the city, intense migration waves resulted in unplanned urbanization that expanded the borders of the city.

YSK decision not a top issue at agendas

A final issue was the YSK decision to annul the March 31 mayoral elections in Istanbul. While there are different opinions of the YSK decision, many did not dwell on the issue. According to 19-year-old Beyza in Üsküdar, the whole process is quite annoying since she finds the cancellation of the elections pointless. "I think that having redo elections is very disturbing. I mean the process of it. We have to go over everything once again. I wish we could have voted once and that would be the end of it," she said.

Yet 18-year-old Yasin found its consequences positive because the competition between political parties resulted in discounts on water and public transportation. However, his friend Ali does not find it normal.

The mayoral election in Istanbul on March 31 was annulled by the YSK on May 6 due to irregularities and unlawfulness. Nearly 8.5 million voters headed to the polls in Istanbul and a very close race took place between AK Party candidate Yıldırım and CHP candidate Ekrem İmamoğlu.