Turkmen gas to be carried to European markets through Turkey 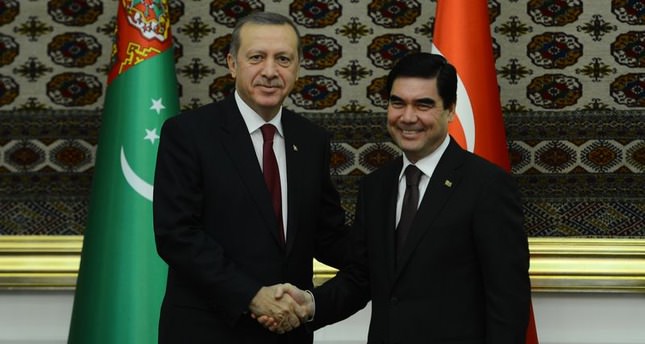 by Daily Sabah with AA Nov 07, 2014 12:00 am
At a joint press conference held by President Recep Tayyip Erdoğan and President Gurbanguli Berdimuhamedow of Turkmenistan after a private meeting between the two leaders as well as series of committee meetings in the Turkmen capital of Ashgabat, Erdoğan said that Turkey's cooperation with Turkmenistan in the transportation and energy sectors is now becoming more strategic and there is much potential that has yet to be discovered.

Underscoring that this was the fourth meeting held between the two countries, the Erdoğan said that the total project value undertaken by Turkish contracting firms in Turkmenistan has reached $42 billion and such projects are also helping to improve Turkmenistan's infrastructure.

"Turkmenistan has a strategic geopolitical location since it connects Central Asia to international markets through the Caspian Sea. I believe Turkmenistan and the region in general will benefit from joint projects. We discussed and confirmed our joint vision for carrying Turkmen gas through Turkey to European markets," said Erdoğan.

Berdimuhamedow emphasized that he was pleased with Turkey's support for Turkmenistan's efforts to improve its transport network. "We prioritize and trust Turkish companies to realize million dollar projects in our country," Berdimuhamedow said, and added that the trade volume, which was $4.75 billion in 2013, has exceeded $5 billion in the first nine months of 2014. Berdimuhamedow also underscored the importance of cooperating in other fields such as tourism and education as well as with the Turkish Cooperation and Coordination Agency (TİKA) in history and culture.

On Friday, the private Turkish company Atagaz and Turkmenistan's state-owned Turkmengaz signed a framework agreement for a natural gases deal. No further details about the agreement have been released.
Last Update: Nov 07, 2014 10:48 pm
RELATED TOPICS