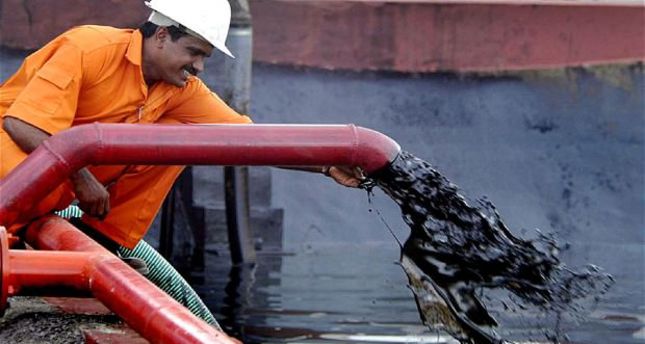 by French Press Agency - AFP
Nov 12, 2014 12:00 am
Oil prices retreated on Wednesday, with traders fixed on the OPEC oil cartel which appears set to maintain output at an upcoming meeting despite ample global supplies of crude.

Brent crude for delivery in December lost 29 cents to $81.38 a barrel in late London deals. The contract had hit $80.46 on Tuesday - the lowest level since September 2010.

On Wednesday, US benchmark West Texas Intermediate for December delivery lost 20 cents to $77.74 a barrel.

"Oil prices continue to tumble on concerns over modest demand and no signs of clipping supply at OPEC," said Desmond Chua, a market analyst at CMC Markets in Singapore.

Investors are keeping a close eye on comments by OPEC members ahead of the cartel's meeting in Vienna on November 27, with dissent evident in the 12-nation group on the need for a production cutback.

"I hope that (oil) prices will not reach a level where they harm (the) national economy," Kuwaiti Oil Minister Ali al-Omair told the official KUNA news agency on Tuesday. Oil income makes up around 94 percent of the country's public revenues.

Omair attributed the slide in oil prices to oversupply and a weak global economy. He said OPEC would discuss oil prices and "take appropriate decisions that serve the economic interests of its members" when they meet at the end of the month.

A production cut by the cartel would run against its kingpin Saudi Arabia's recent price cuts for crude exports to the US market.

The move was seen by market observers as an effort to maintain market share as it faces competition from cheaper oil from US shale fields.

Elsewhere, the US Department of Energy's closely watched weekly report on oil inventories, normally released on Wednesdays, will be published Thursday due to this week's Veterans Day holiday in the United States.