Applications for US jobless aid climb to 290,000 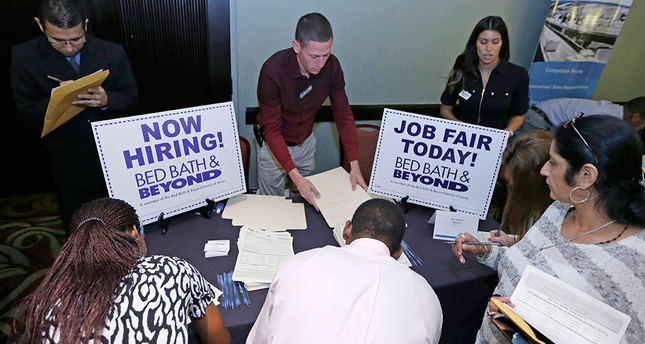 The Labor Department said Thursday that weekly applications rose 12,000 to a seasonally adjusted 290,000. The four-week average, a less volatile measure, increased 6,000 to 285,000, up slightly from what had the lowest average in more than 14 years.

"This increase is nothing to worry about; seasonal quirks pointed clearly to an increase, and we are relieved the number was not higher," said Ian Shepherdson, chief economist at Pantheon Macroeconomics. He projected that at the current pace of unemployment applications, the U.S. economy should add roughly 250,000 jobs net each month.

Applications are a proxy for layoffs. The four-week average has plunged 17.2 percent in the past year, a sign that businesses feel more confident about their prospects, are holding onto workers and potentially looking to amplify hiring.

Thursday's report marked the ninth straight week of applications below 300,000. That level suggests to economists that the steady gains in jobs this year should continue.

Declining layoffs have been matched by a substantial increase in hiring. Employers added 214,000 jobs last month as the unemployment rate slid to 5.8 percent from 5.9 percent, the Labor Department said last week.

But the job gains have yet to push up wages much, limiting the broader growth of the U.S. economy. Average hourly pay rose 3 cents in October to $24.57. That's just 2 percent above the average wage 12 months earlier and barely ahead of a 1.7 percent inflation rate.