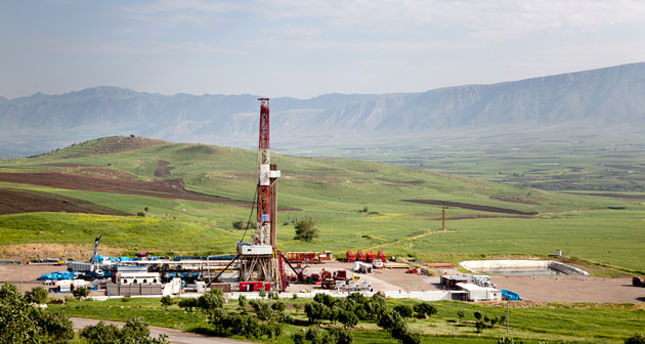 by Ali Ünal
Nov 14, 2014 12:00 am
Iraq's federal government and the semiautonomous Kurdistan Regional Government (KRG) agreed Thursday to resolve all of their outstanding issues, including the crucial issue of oil exports. According to a statement published on the KRG's Arabic website, Iraqi Federal Oil Minister Adel Abdul Mahdi met with KRG Prime Minister Nechirvan Barzani and Deputy Prime Minister Qubad Talabani in Irbil. Three major breakthroughs were made in hopes that they would lead to a resolution. The Iraqi federal government has agreed to transfer $500 million to the cash-strapped KRG. The regional government reportedly lacked the funds to pay the salaries of its own employees, many of whom hadn't been paid in months.

In return, the KRG agreed to have at the disposal of Iraq's federal government, 150,000 barrels of crude oil daily. Barzani and his delegation will soon visit Baghdad to develop a comprehensive constitutional plan to resolve all outstanding issues with the federal government. U.S. State Department spokeswoman Jen Psaki welcomed the announcement, and said that the U.S. will continue to serve as a broker between the regional and central governments.

"We are encouraged by this development and the willingness of officials in Baghdad and Irbil to address these complex issues directly and earnestly," she told reporters, adding: "We understand that this is the first of many steps that will be required to reach a comprehensive agreement. And the United States will continue to serve as a neutral broker and facilitator to the extent desired by the leadership of both Iraq and the KRG."

Relations between Irbil and Baghdad have been strained since the KRG began independently exporting oil in January to world markets via pipelines through Turkey. Nouri al-Maliki, the former Iraqi prime minister, had retaliated to the unilateral move by cutting the Kurdish government's share in Iraq's federal budget. The federal government had said the regional government exported Iraqi oil illegally without Baghdad's authorization, while Irbil argued the sales were in compliance with the new Iraqi constitution.

"Wait and see. It is a temporary agreement that does not address most issues. I am not rushing to conclusions," said Marina Ottaway, a Middle East expert at the Wilson Center, a Washington-based think tank. Ottaway points out that the Kurdish region seems to be able to sell oil internationally on a regular basis. "Thus the international market appears to have concluded that the Kurdish region can operate as an oil exporter without Baghdad's permission," she said. "This makes the Kurdish region feel more confident at a time it is desperate to increase its revenue because transfers from Baghdad have dried up."

"It is hard to imagine this is a lasting deal," comments Shwan Zulal, head of the London-based international affairs consultancy Carduchi Consulting. For Zulal, it is a question of lack of trust. "Given that Baghdad decided to play politics with the budget, it is hard to imagine the Kurdish region giving up the right to export, and leaving the control of export revenue to Baghdad now," Zulal explained. Crude keeps flowing through Turkey, Zulal said, despite the violence from the Islamic State of Iraq and al-Sham (ISIS). Nor has Baghdad's opposition to oil exports cut off the supply. All this strengthened Irbil's hand. The fraught question of the control of oil export revenue, which Iraq's federal government claims, while Irbil argues the oil sales were in compliance with the new Iraqi constitution, remains at the center of the dispute. And the pot to be shared is large. The KRG announced in October that its oil exports would increase from 250,000 to 450,000 barrels per day by the end of this year.