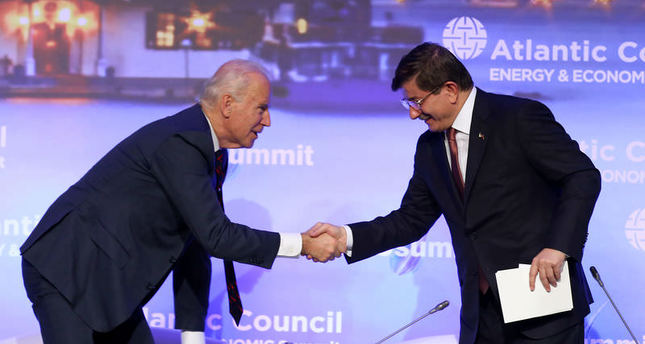 U.S. Vice President Joe Biden and Turkish Prime Minister Ahmet Davutoğlu spoke at the closing session of Atlantic Council Energy and Economic Summit organized in Istanbul on Saturday and underlined the importance of energy security. Prime Minister Ahmet Davutoğlu stated that the only way to keep Iraq together is to protect its unity and its distribution of power resources.

"Therefore, during my recent meetings in Irbil and Baghdad, I called for such a vision to be adopted. These meetings were very productive and no country can be gladder than Turkey for this deal," said Davutoğlu.

The prime minister further underlined Turkey's need for energy supplies and with so many resources around Turkey has to step up. The prime minister also stated that distributing energy in Iraq to Europe through Turkey, with sales of such energy to Turkey being included, will be beneficial for both the central and the regional governments. "No one in such a growing economy can say Ankara should not interfere, those energy resources should remain idle and the conflict should continue for 50 years," said Davutoğlu.

Davutoğlu stated that energy is an extremely valuable resource for the existence of human kind, adding, "All of human kind will benefit from using energy as a tool for maintaining peace, not creating conflicts. While it looks like there is a winner in this conflict in the short run, everyone would lose in the long run."

He emphasized that instead of a strategic game which no one wins, a vision for energy should be based on "win-win" principles, adding that he hopes the meetings of the Atlantic Council will help establish such a vision.

"Turkey aims to become an energy hub to connect the world just like the Silk Road that linked Asia and Europe," said the Turkish prime minister, who stated energy, if used appropriately can be a facilitator. He touched upon the fact that a significant portion of the world does not have sufficient energy, which he has personally witnessed in many countries including Somalia.

Davutoğlu also said Iraq should not be talked about due to its crisis rather it should be discussed for its wealth. He underscored that no one should use energy as a weapon and energy should be used as a means to build peace. "When we talk on energy we shouldn't act as Foreign Ministers but rather act as ministers of interior affairs for humanity" Davutoğlu said.

Touching upon the Cyprus issue, Davutoğlu stated that it is crucial for both sides to acknowledge that natural resources around the island belong to all sides. He emphasized that peace should be achieved without delay here, while he also called on Armenian authorities to seek a peaceful solution to resolve the problems between Armenia and Azerbaijan.

"Turkey is the only country expected to show growth in the next decade in Europe." said US Vice President Biden, who praised Turkey as a regional energy hub. Biden said he does not believe that Russia will continue to be a major source of energy supply for Europe. He claimed that energy is synonymous with security in Europe and Russia particularly uses energy as a weapon, which has become a problem for many countries who depend on Russia for energy supply. Biden also touched upon Russia's Ukraine aggression and underlined that it shows Europe's security has multiple dimensions.