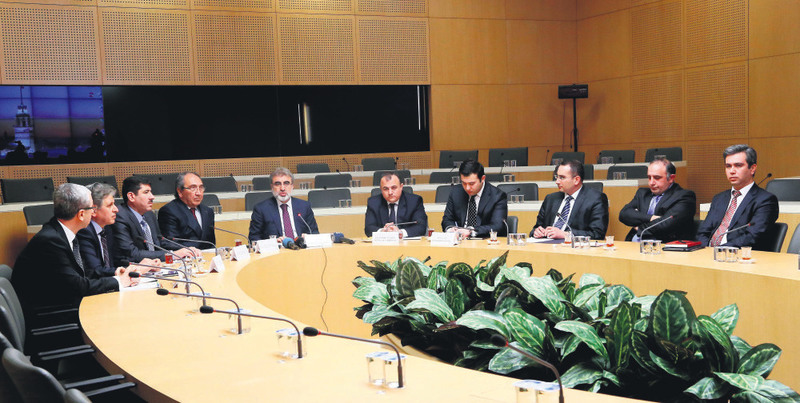 Energy and Natural Resources Minister Taner Yu0131ldu0131z met with representatives from the Steel Pipe Producers' Association (u00c7EBu0130D) at the ministry yesterday.
by Daily Sabah Mar 09, 2015 12:00 am

Energy and Natural Resources Minister Taner Yıldız said yesterday that the foundations of the Trans-Anatolian Natural Gas Pipeline (TANAP) Project, which will carry gas from Azerbaijan to Europe via Turkey, will be laid by the President Recep Tayyip Erdoğan in Kars, a city in northeast Turkey, on March 17.

Speaking about the TANAP project, which is worth $1.5 billion and will use approximately 1.3 million tons of steel pipes, Yıldız said that around 1.1 million tons of the required steel will be produced locally. Yıldız met with representatives from the Steel Pipe Producers' Association (ÇEBİD) at the Ministry, and said that they will always be supportive of the producers in the sector. He also added that steps will be taken to eliminate any problems or anti-damping investigations in a manner that will not harm the TANAP project. Yıldız underlined that such steps are also crucial for the natural gas pipeline coming from Iran, the pipeline that will come from Basra and reach Ceyhan, the pipelines coming from Turkmenistan and any pipeline in the future that may be constructed in the Eastern Mediterranean Region, as they will all have an important share in the steel pipe market. He also said that he believes they will come to an agreement that will both support domestic production and not damage any of the current projects.

The Turkish steel pipe industry is currently the biggest in Europe and the fifth biggest in the world. The Energy Minister said that with the new innovations and state-of-the-art technologies, steel pipe producers can easily be involved in all major projects in Turkey, and that the ÇEBİD's annual export figures are much higher than the TANAP project, meaning that the annual volume of manufactures and exports of Turkish steel pipe producers is higher than the volume required for the TANAP project. The chairman of ÇEBİD, Ahmet Kamil Erciyas, said that the total exports of the Turkish steep pipe industry is higher than $1.5 billion and the total production in the industry is around two million tons. He also said that the sector is soon to reach a capacity of six million tons, with four million tons of actual production.

Erciyas said that they tried to encourage local producers to become involved in the TANAP project, but they were not successful, and as a result, they had to import raw materials at the lowest possible prices from global markets. He said that due to certain delays, production has not yet commenced, but when it starts, they have the technology to compensate for the time lost and may even complete production earlier than expected.

Erciyas also underlined that local steel producers are requesting anti-damping. "The anti-damping mechanism currently includes seven countries that Turkey imports from, which accounted for 88 percent of Turkey's total imports. Therefore, if we close 88 percent of our import doors, the TANAP project will be the most adversely affected from the practice," added Erciyas, and requested the TANAP project not be included as part of the anti-damping practice.

Increase in energy costs will not affect citizens

On whether the increase in the dollar will have an adverse effect on energy prices, Energy and Natural Resources Minister Yıldız noted that Turkey imports around 72 percent of its energy and local production, while it varies, is around 28 percent. He further stated that while the increase in the dollar affects government spending, the energy sector can compensate for such increases. Yıldız also stated that the price of crude oil per barrel has increased from $46 to $60 since January 13, and that the increase in dollar parity from TL 2.28 to TL 2.60 and the 30 percent increase in crude oil prices adversely affects energy costs. However, Yıldız noted that they are planning to absorb such fluctuations and not pass on the increase to citizens.
Last Update: Mar 10, 2015 9:58 am
RELATED TOPICS