Greece's Tsipras in favor of Turkish Stream, but not the name 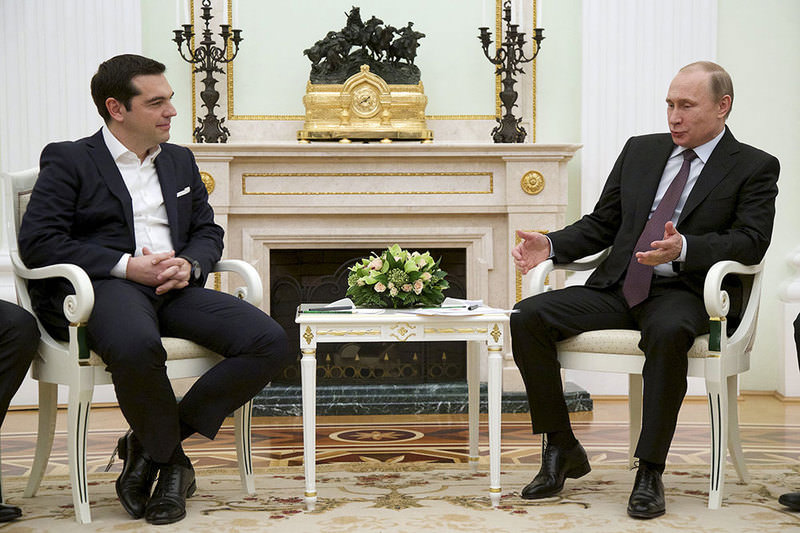 by Daily Sabah Apr 08, 2015 12:00 am
Greek Prime Minister Alexis Tsipras said Greece would gladly participate in the Turkish Stream pipeline project, as long as the project's name is called the Greek Stream when the pipeline is on Greek territory.

Speaking at a joint press conference with Russian President Vladimir Putin on Wednesday, Tsipras told the press that, "Greece would gladly build a Greek pipeline for natural gas from the Turkish-Greek border."

"We may not accept that the Greek pipeline to be Turkish Stream but this pipeline we believe will upgrade our relations with Turkey and in that sense we are ready to study the financing possibilities respecting always the framework set by our membership in the European Union and, of course, the Greek framework," Tsipras said, adding that Greece and Russia will discuss the project in detail in the near future.

He said the project could earn Greece "millions of euros" every year and that Athens' Western creditors would also benefit should the Greek economy improve as a result of closer economic cooperation between the European Union member state and Russia.

Putin also said that Greece's participation in the Turkish Stream gas pipeline project was possible, but any decisions would depend on the technical details.

The project is intended to be alternative to the previously planned South Stream pipeline project which was intended to carry natural gas to Europe via the Balkan region. The Turkish Stream will build a pipeline to Turkey and then shipping gas overland to Greece and on to the rest of Europe.

The European Commission, the EU's regulatory arm, is currently analyzing the Turkish Stream plan for its "economic viability as well as regulatory and legal feasibility and consequences,"