Russia to speed up work on building Turkish Stream pipeline 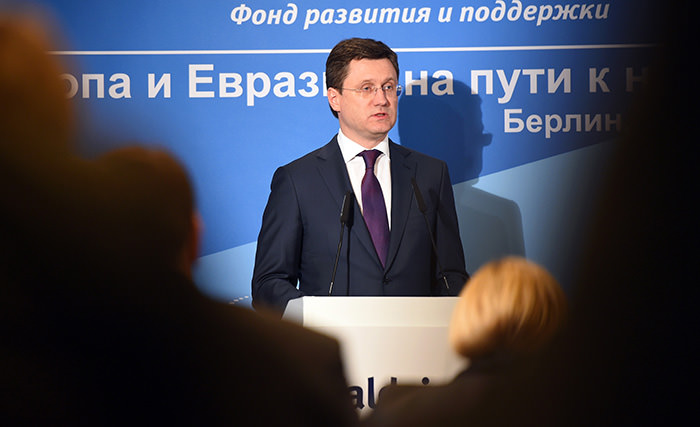 Alexander Novak, Russian Energy Minister, delivers a speech during the Valdai International Discussion Club in Berlin (AFP Photo)
by Anadolu Agency Apr 14, 2015 12:00 am
Russian Energy Minister Alexander Novak said on Monday that his country is not planning to extend the natural gas transit contract with Ukraine after 2019, but would instead speed up work on building the alternative Turkish Stream pipeline.

"As you know, (Gazprom's chief) Alexei Miller gave a speech today, stating that the transit contract with Ukraine will not be renewed after 2019," Novak told Russian media following a speech in Berlin. "So now, all our efforts are (focused) on realizing the construction of the gas transportation infrastructure in Turkey."

Novak and Miller delivered remarks at the international "Europe and Eurasia: Towards the New Model of Energy Security" conference.

The head of Gazprom criticized Ukraine for "manipulation" and said that the transit contract with Kiev will not be renewed when it ends.

"We need to understand that 90 percent of Russian gas transited through Ukraine to Europe was a gift from the U.S.S.R. to Ukraine. But when a gift is being used as a tool of manipulation, it can't go on for a long time," Miller said.

The project is intended to replace the previously planned South Stream pipeline, which was to carry natural gas to Europe via the Balkans.

Turkish Stream is planned to have a capacity of 63 billion cubic meters of natural gas per year.

From this project, Turkey would be allocated around 14 billion cubic meters annually for its domestic use and the remaining gas would be exported to Europe.
Last Update: Apr 15, 2015 3:38 pm
RELATED TOPICS