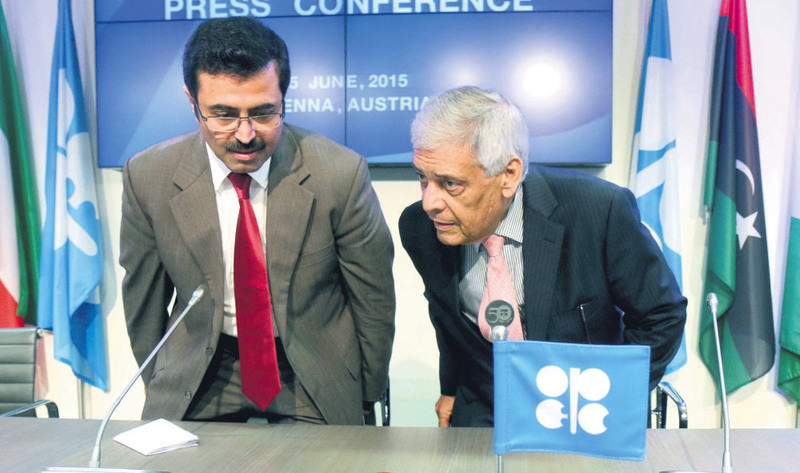 by Associated Press Jun 05, 2015 12:00 am
OPEC decided to keep its output target at 30 million barrels a day Friday but left it to members to restrain their overproduction, reflecting the cartel's inability to strictly enforce its own limits in attempts to control the world supply of crude.

While the Organization of the Petroleum Exporting Countries accounts for over a third of the world's oil, its power to determine supply and demand has been steadily eroding as outsiders capture large shares of the market. It gave up imposing quotas on individual members four years ago after these were consistently ignored. That has led to an overhang in recent months of more than 1 million barrels a day of OPEC production beyond the target. But the likelihood of continued overproduction persists.

OPEC powerhouse Saudi Arabia is fighting to keep market share against U.S. shale oil, Iran plans to increase production in anticipation of an end to sanctions that have crimped its crude exports and other countries are trying to compensate for low prices by selling more. The international price of crude was down 20 cents at $61.83 after Friday's announcement. Announcing the decision to keep the present target, an OPEC statement urged members "to adhere to it," and Abdullah al-Badri, the organization's secretary general, also urged member nations to "abide with that 30 million." But he acknowledged that, as in the past, countries had only been assigned "indicators" not quotas in attempts to hew to the target.

In contrast, Saudi and Iranian comments Friday reflected the countries' determination to produce what they decide. "Production policy is a sovereign right," Naimi told reporters.

Iranian Petroleum Minister Bijar Namdar Zangeneh, meanwhile, advised OPEC to make room for increased output from his country as early as the end of the month. That's the target date for a deal between Tehran and six world powers envisaging an end to sanctions on the Islamic Republic in exchange for curbs on its nuclear program.

Iran hopes to ramp up production by up to 1 million barrels a day within a year once sanctions are gone, and Zangeneh said his country doesn't "need any decision from the OPEC side to return to the market, because it's our right."
Last Update: Jun 05, 2015 11:47 pm
RELATED TOPICS