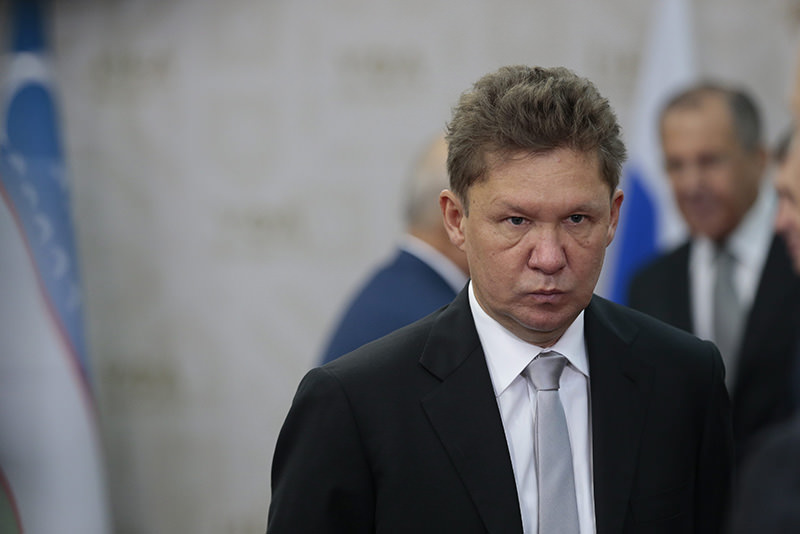 Gazprom CEO Miller attends meeting with Uzbekistan's President Karimov (not pictured) and Russian President Putin (not pictured) during their meeting at SCO summit in Russia, 10 July 2015 (EPA photo).
by Şeyma Eraz Oct 09, 2015 12:00 am
Russian state-owned energy giant Gazprom CEO Alexei Miller has announced that they refused Ankara's demand for an additional 3 billion cubic-meters (bcm) of natural gas transfers through the Blue Stream pipeline. Miller also said that 2 bcm would be provided through the proposed Turkish Stream pipeline, which has not yet been started to be constructed.

Erdoğan accused Moscow and its ally Iran of working to maintain the "state terror" of Syrian President Bashar Assad, whose military forces have killed over 300,000 people since the beginning of the Syrian civil war.

This was not the only announcement made by Gazprom's CEO this week. Miller also announced that they have reduced the designed capacity of the Turkish Stream project, which aims to transport Russian natural gas to Europe through Turkey, by half. Originally, the capacity of the natural gas pipeline project was designated to be 63 bcm per year, but the capacity has now been decreased to almost half the original amount to 32 bcm per year.

Erdoğan has said Russia will lose "a lot" if it loses Turkey as a friend. His comments came Tuesday in the aftermath of a Russian fighter jet's violation of Turkish airspace over the weekend, which put ties between Moscow and Ankara under the spotlight. Erdoğan said: "If Russia loses a friend like Turkey with which it has conducted much business, it will lose a lot."

Turkey provides natural gas from Russia through the Blue Stream and Russian gas-west pipeline, which passes through Ukraine. Last year, Turkey purchased 27.4 bcm of natural gas from Gazprom, which makes Turkey the biggest importer of Russian natural gas. Erdoğan also said that Turkey would find different alternatives to provide natural gas, and it will be Russia's loss to lose such a customer. However, in the short term, Turkey needs to continue buying from Russia to be able to cover the demand of its population of 75 million. On the other hand, in the mid-term projects like the Trans-Anatolian Natural Gas Pipeline (TANAP), which is being constructed to deliver Azerbaijani natural gas to Europe through Georgia and Turkey, will decrease Turkey's dependence on Russian natural gas, according to experts.

He also said that the Mersin nuclear plant, which Russia invested $3 billion in to build in Turkey, can be built by someone else.

According to sources speaking to Daily Sabah, the main conflict between Turkey and Russia on natural gas is the Turkish Stream project. While Russia rushes to begin the construction of the four lines of the project, the Turkey wants to start with one line, which will only provide gas to Turkey. Gazprom has kept postponing giving the promised 10.25 percent discount on Turkey's purchases because of this disagreement. Refusal on the additional 3 bcm has also been considered as maintenance of the disagreement. The political conflicts the two countries have had on the Syrian issue also restricted business interests, according to experts.

The Turkish Stream pipeline is proposed to cross under the Black Sea with four main underwater pipelines, each with a 15.75 bcm capacity. After 660 kilometers underwater, 250 kilometers of pipeline will be laid on Turkey's European land. Turkey will be receiving natural gas from one of these lines. Turkey's current natural gas consumption is 50 bcm and provides 28 bcm to 30 bcm per year. Russia is Turkey's biggest natural gas supplier.
Last Update: Oct 09, 2015 5:08 pm
RELATED TOPICS