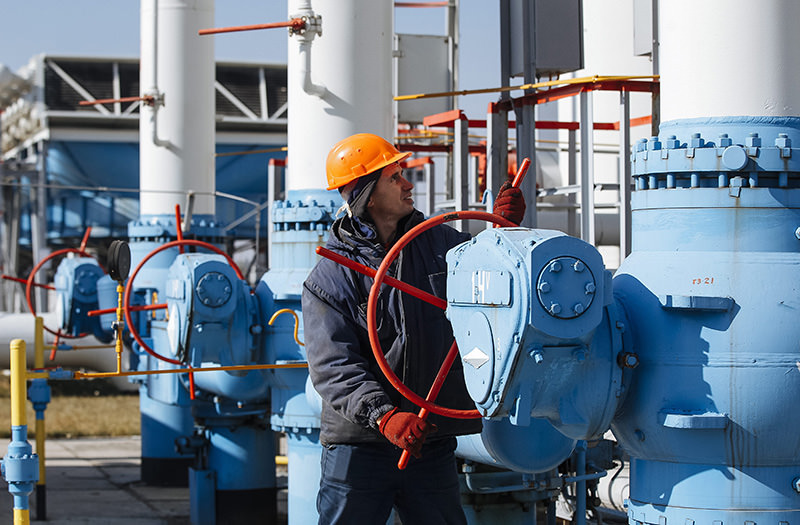 A worker turns a tap at the gas-compressor station in Mryn village, about 130 km of Kiev, Ukraine, 15 October 2015 (EPA photo)
by daily sabah
Nov 01, 2015 12:00 am
The experts agree that Turkey's state-run Petroleum Pipeline Corporation (BOTAŞ) and Russian state-run Gazprom will be able to agree on discount of natural gas prices before the arbitration process is completed both due to the importance of Turkey's geographical location and Russia's good economic relations with Turkey. A common opinion from experts is that such an agreement will be beneficial for both parties.

BOTAŞ had announced on Thursday that it applied for international arbitration as Gazprom Export had not signed the addendums required for the discount to be applied to natural gas prices for Turkey's purchases from Russia.

Speaking to Anadolu Agency (AA), Nigyar Masumova, an expert at the Global Economy Department of Moscow State University, said that an agreement before the final arbitration decision is issued would be beneficial for both Turkey and Russia. Masumova said that after the South Stream Natural Gas Pipeline project was cancelled, the importance Russia pays to the Turkish Stream project had increased. "If both countries agree on the discount, progress can be achieved on the Turkish Stream Natural Gas Pipeline project, which both countries will benefit from economically," she said.

Orestis Omran, a legal adviser from the international law firm Dentos also said that along with geopolitical balances Turkey and Russia can agree on natural gas prices without waiting for the final arbitration decisions due to the good economic relations between the two countries.

Omran said that by exercising its contractual right to apply to arbitration, BOTAŞ is pressuring Gazprom to formalize the discount of 10.25 percent verbally agreed on between BOTAŞ and Gazprom. He also indicated that if both parties insist on arbitration to give the final decision, the process could take a long time. "For example, BOTAŞ had applied for arbitration in 2005 regarding the natural gas prices paid to Iran. BOTAŞ had finally won the case, which lasted for many years, and received $760 billion from the Iranian National Natural Gas company," Omran said.

Associate Professor Ali Yeşilırmak, a faculty member in Istanbul Şehir University's Law Department and the author of the book "Temporary Precautions in International Commercial Arbitration," said that if there is a provision in the agreement that prices will be adjusted when gas prices increase or decrease then this adjustment needs to be carried out.

Negations on the gas issue between Turkey and Russia have recently been very intense. In the previous month, Gazprom CEO Alexei Miller announced that they had reduced the designed capacity of the Turkish Stream project, which aims to transport Russian natural gas to Europe through Turkey, by half. Also, prior to this announcement after President Recep Tayyip Erdoğan had met with Russian President Vladimir Putin on Sept. 25, he said Turkey wanted all four pipelines of the project to be constructed, while Russia preferred to only initially build the first pipeline.

In addition, according to the mutual agreement signed between Gazprom and BOTAŞ, the price of natural gas purchased by Turkey must be updated every three years. Thus, since January, Turkey has demanded a 10.25 percent discount and a retroactive $1 billion payment from the Russian side. However, the Russian side considers the signature to start the first phase of the project as a precondition for the price discount. Despite all these disagreements, commenting on the recent optimistic environment, experts expect that an agreement on a price discount will be reached soon.
Last Update: Nov 01, 2015 9:59 pm