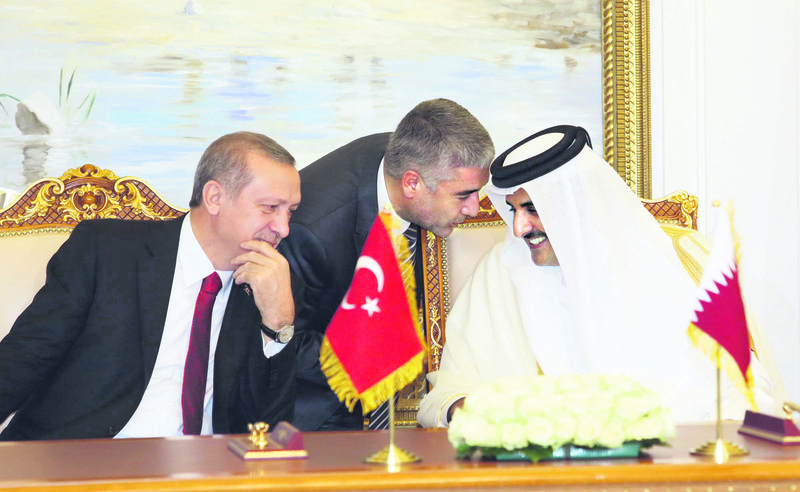 by Serdar Karagöz Dec 02, 2015 12:00 am
Turkey's state-owned energy company BOTAŞ signed a preliminary agreement on Wednesday with Qatar's national petroleum company to purchase liquefied natural gas (LNG) over a long-term period. The agreement, signed during President Erdoğan's visit to the country, foresees the infrastructure for Qatari imports and a terminal to be established in Turkey. Erdoğan was welcomed to the country with an official ceremony by Sheikh Tamim bin Hamad bin Khalifa al-Thani, the eighth and current Emir of the state. Details such as price and quantity will be determined in a separate deal.

LNG is natural gas that has been converted to a liquid form for storage or transport purposes and is extensively used for overseas shipments. Qatar, located on a peninsula and bordered only by Saudi Arabia, is the world's largest LNG exporter. The tiny country accounts for around 33 percent of the total LNG supply in the world. The country holds 14 percent of the world's proven natural gas reserves.
The move came after relations between Turkey and Russia were strained after a Turkish F-16 downed a Russian SU-24 bomber jet that breached its airspace on Nov. 24. Russia has announced several economic sanctions, including bans on Turkish vegetables and fruits. While the new sanctions will prevent some Turkish goods from entering Russia and prohibit the employment of Turkish citizens by Russian employers, the energy-dependent economy's governors have not risked cutting the natural gas supply to Turkey. Last year, Turkey rung up a $6.5-billion bill by purchasing 27.4 billion cubic meters of natural gas from Russia's state-owned gas company Gazprom, making Turkey the biggest importer of Russian natural gas.

Although Russia did not signal any problems regarding the flow of gas to Turkey, it was widely debated whether the country's natural gas supply would be enough to meet demands during the winter. Top Russian officials have refused to meet with Turkish governors since the incident and preferred to apply sanctions instead. Russia's response to the political crisis galvanized Turkey's search for energy alternatives to ensure that its energy needs are met.

Turkey received 56 percent of its natural gas from Russia in 2013, while LNG imports, mainly from Algeria, made up 13 percent of its supplies. Besides the usage in heating, natural gas power plants generate roughly 33 percent of the country's electricity. In addition, 15 more agreements were signed between Turkey and Qatar during the Qatar-Turkish Supreme Strategic Committee meeting in the areas of finance, education, maritime, science and technology.