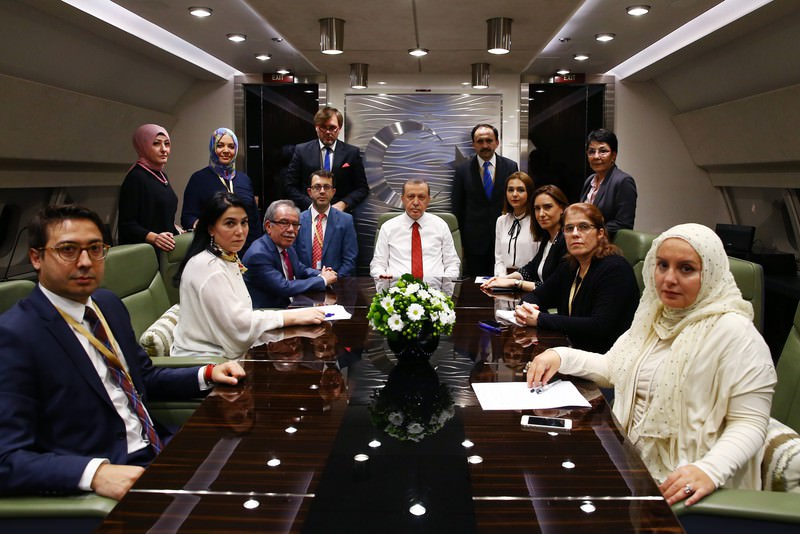 16 new deals between Ankara and Doha increase strategic partnership between the two countries, with both sides agreeing on regional policies. Doha will also provide more gas to Turkey, as the country seeks to ease the Russian threat

President Recep Tayyip Erdoğan, speaking to journalists early Thursday during his flight from Doha to Ankara, described the Qatar visit, which also saw the first joint Supreme Strategic Committee meeting, as a great success since it had allowed the two countries to sign 16 separate agreements and a declaration of intent involving the bilateral lifting of visa requirements for citizens of both countries.

"Visas with the EU will be lifted in 2016. Agreements signed are also important to show that Qatar is on Turkey's side concerning regional developments," said the president.

He said Turkey-Qatar ties had constantly improved during his term as first prime minister and then president both during Hamad bin Khalifa Al Thani and his son Tamim bin Hamad Al Thani's tenure as the emir. The president shared his hope that the two countries would continue to cooperate for both infrastructure and other projects. "We are at a state where we will sign a bilateral employment agreement whereby Turkish job seekers will be employed in Qatar, which is asking from us both qualified and unqualified workers. This is important for both employment rate and those citizens who are looking for work." He said once the necessary analysis and arrangements were made, Turkey would be sending significant numbers of citizens to the Gulf Kingdom. He also said an agreement with Canada involving the sending of 25,000 Syrian refugees was under consideration. Erdoğan said similar requests from Arab countries, if made, would also be considered.

The president also talked about discussions that centered on a possible Turkish military base in Qatar, noting that defense ministers of both countries were discussing the matter.

Improving trade with Qatar focused on possible natural gas trade, Erdoğan said, adding that Qatar was ready to oblige. "In terms of Liquid Natural Gas (LNG) trade, there are no problems concerning Qatar satisfying our needs. There will be steps taken concerning storing the product. Relevant institutions will be working on the matter. They will either purchase a local private firm or establish their own facilities, if necessary. We already purchase LNG from Algiers. Once we complete our preparations concerning storing within the next two to three years, I believe we will be at a stage to progress on the matter."

Turkey and Qatar have been on the same page since the start of the matter of supporting moderate opposition groups in Syria, said Erdoğan, adding: "The international fight against DAESH to ensure a transition in Syria will continue. Our discussions with [U.S. President Barack] Obama in Paris were very positive."

He said the coalition's target was DAESH and other terrorist groups. "We always said we are against all terrorist groups. In regions where Turkmens live, there is no DAESH or PYD [Democratic Union Party]. The coalition will fight DAESH from the air while moderate opposition groups and the Free Syrian Army [FSA] will fight over the land. The train-and-equip program is also continuing. I hope the problems in the region where Turkmens live will also be resolved soon."

The PYD is the Syrian wing of the PKK, which is recognized as a terrorist group by Turkey, the U.S. and EU.

When asked if Thursday's planned meeting between Foreign Minister Mevlüt Çavuşoğlu and his Russian counterpart Sergei Lavrov pointing to a thaw in the tension that was caused after Turkey shot down a Russian plane that violated its airspace, Erdoğan said, the two ministers had already decided to meet in Serbia on the sidelines of the Organization of Security and Cooperation in Europe (OSCE) summit, following their talk soon after the jet was shot down. "Such developments should continue. I believe Turkey and Russia can quickly overcome the current state of affairs, which I hope will eventually happen. Such disagreements can only be resolved at the table, not via the press or social media. No one can emerge as a winner from such acts. We want both sides to win and this can only happen if we sit down and talk."

When asked whether the Turkey-Russia Supreme Cooperation Council meeting scheduled for Dec. 15 would be held, Erdoğan said: "It is Russia's turn to host the meeting so they need to extend the invitation. As yet, I don't know how things will proceed. It may come up at the meeting of foreign ministers in Belgrade."

Erdoğan also emphasized the respect paid to the pilot who died during the altercation, noting that the Turkish military had followed all the necessary arrangements and religious rituals to honor the soldier. Repeated Turkish requests to transport the body of the Russian pilot were rejected by Russia, which preferred to transport it with its own plane.

When asked about the fate of the $20-billion Akkuyu Nuclear Plant project that will be built by Russia, Erdoğan said none of the statements from Moscow pointed to the cancellation of the project. "This is an ongoing project. Russia has already deposited a significant amount of money to local banks to be used for this project. We have around 300 engineers in Russia currently being trained. Only concerning the Turkish Stream project were there certain disagreements and that's why it was suspended."

The president denied reports that he had talked to the Israel Army Radio, where he was claimed to have said that bilateral ties can be mended. "I was walking somewhere when someone asked me whether ties with Israel could be mended. And I said, 'Why not? But only the prerequisite conditions need to be met' and then walked on. Our conditions are clear. There was an apology, but no compensation has been paid to the victims nor has the embargo on the Gaza Strip been lifted." Israel-Turkey relations have been at a standstill since Israeli special forces killed 10 people on the Mavi Marmara ship in 2010 that was taking humanitarian aid to Gaza.

"However, the attitude of the Israelis and their government is very different. For example, there are Israelis opposed to the violation of the Al-Aqsa compound. A similar attitude is apparent in the Turkish-Israeli relations. Internationally respected Jews come to us to ask how ties can improve and we explain to them how. However, just when we start talking about such things, Gaza is bombed or Al-Aqsa is attacked and consequently the process is discontinued."

The president, speaking on the murder of Diyarbakır Bar Association President Tahir Elçi last Saturday, called on all to wait until the forensic investigators released their reports, criticizing the Peoples' Democratic Party (HDP) Co-Chair Selahattin Demirtaş, who blamed the police without any evidence. He accused Demirtaş of irresponsibility, noting that the weapon found near Elçi's body definitely belonged to a terrorist.

The government aimed to ensure peace and unity for all 78 million citizens of Turkey, said the president, adding that efforts to develop the entire country would continue. He also commended the new government's program, describing it as a vision to further strengthen the reform push ongoing since 2002.

He underlined the importance of pushing forward with efforts to prepare a new constitution. "A new constitution will definitely become stronger with a presidential system. The composition of the current Parliament precludes the government from achieving this alone. It can with opposition support. However, no matter what happens, the public needs to be consulted with a referendum."

He said a presidential system would provide an added strength to the country and remove the systematic problems within the running of the state.
Last Update: Dec 04, 2015 1:27 am
RELATED TOPICS