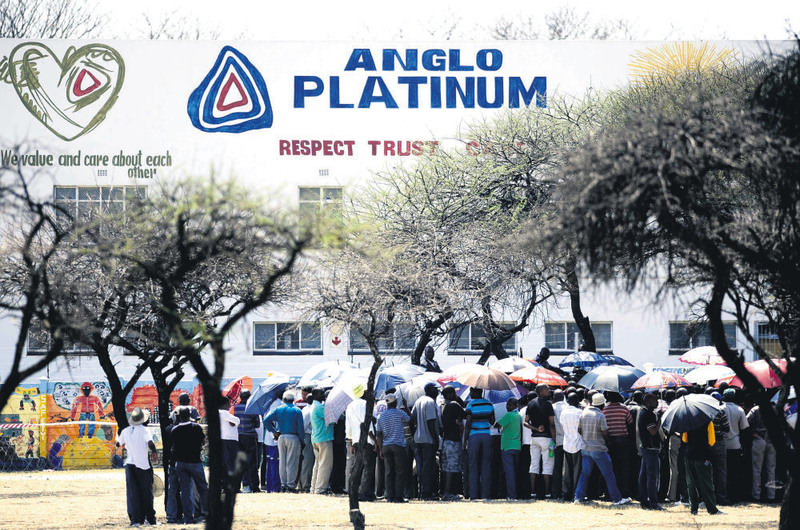 A picture taken on Oct. 5, 2012, shows striking mine workers gathering outside the Anglo American Platinum (Amplats) Mine in Rustenburg, South Africa.
by Associated Press Dec 09, 2015 12:00 am

Energy stocks are falling again as the price of oil continues to slide. Most of the biggest decliners in early trading Tuesday were oil and gas companies. Devon Energy lost 8 percent, Kinder Morgan fell 7 percent and Southwestern Energy fell 5 percent. U.S. crude dropped another 2 percent to $37 a barrel. Oil is the lowest it's been since early 2009.

Last week's decision by OPEC to maintain production levels has hit oil prices hard over the past two trading sessions. On Tuesday, oil prices recouped some losses but still remain near their lowest levels since early 2009, when the world economy was in its deepest recession since World War II. Brent crude, the international standard, was up 60 cents at $41.33 per barrel in London after plunging $2.27 on Monday. Benchmark U.S. crude gained 28 cents to trade at $37.93 per barrel in electronic trading on the New York Mercantile Exchange. The contract lost $1.32 on Monday. Shares in oil companies have suffered as traders price in the prospect of lower future earnings and the impact it will have on production plans low oil prices make many projects uneconomic. Among the fallers were Britain's BP, which was down 1.5 percent, and France's Total, which dropped 1.8 percent.

"The renewed decline in the oil price in the aftermath of last Friday's OPEC meeting is the main focus of financial markets and is weighing on equity prices," said Neil MacKinnon, global macro strategist at VTB Capital.

Shares in the mining firm Anglo American plunged by more than 8 percent after it said it would shed around 85,000 employees or 63 percent of its workforce amid a radical restructuring program meant to cope with the tumble in commodities prices.

Customs data showed imports and exports shrank again in November, though there were signs weak domestic demand might be improving. Exports contracted by 6.8 percent, accelerating from October's 3.6 percent fall. Imports fell 8.7 percent, an improvement over the previous month's 16 percent decline. Import volumes of some goods such as crude oil, fresh fruit and cooking oil rose.