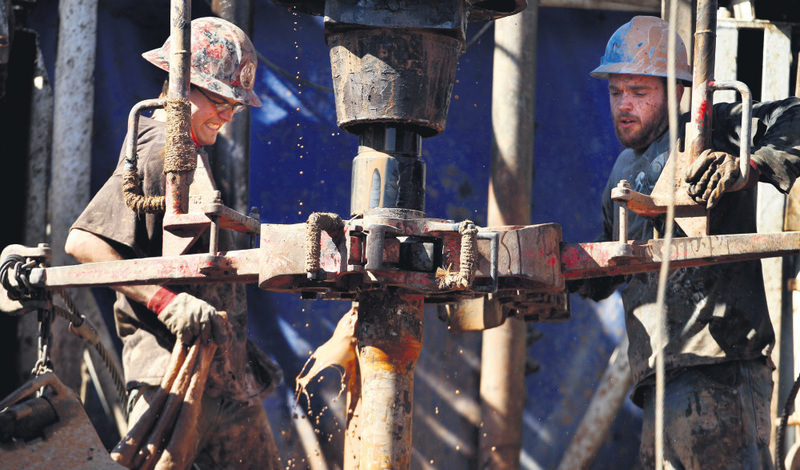 Oil field workers drill into the Gypsum Hills near Medicine Lodge, Kansas.
by Daily Sabah with AFP Dec 11, 2015 12:00 am

The Organization of the Petroleum Exporting Countries expects its overconfident strategy, keeping oil production high to maintain market share despite low prices, to pay back in 2016

The Organization of the Petroleum Exporting Countries (OPEC) said Thursday that it expects oil production by countries outside the cartel to fall in 2016 by more than it previously forecasted, in a sign that its audacious strategy may be working at last. In its latest monthly report, OPEC said the 2016 oil supply from outside the group will decline by 380,000 barrels per day to average 57.14 million per day.

The previous forecast from OPEC, which pumps around a third of the world's crude oil, was for a drop of 130,000 barrels per day for countries outside the 13-country group.

Oil prices have plunged by more than 60 percent in the past 18 months due to a global supply glut and a weaker Chinese economy, with Brent crude falling under $40 this week for the first time since 2009.

In the past, OPEC has responded to price falls by curbing production. But this time - most recently at a meeting in Vienna last Friday - it has opted to keep the taps open. Driven by cartel kingpin Saudi Arabia, this strategy is aimed at maintaining market share and squeezing out U.S. producers of shale oil, whose output has boomed in recent years but which need a higher oil price to make money.

The new December monthly report suggested, however, that its ploy may be taking longer than expected to bite, with the cartel obliged to increase its forecast for 2015 non-OPEC production.

The biggest expected drop in 2016 -- of 110,000 barrels -- will come from the United States, but the new report also showed that production from non-OPEC Russia hit post-Soviet records in October and November. It added, however, that while the share of OPEC crude in global supply has fallen since 2008, in the first 11 months of 2015 it inched up 0.4 percentage points to 32.9 percent. World oil demand is anticipated to have risen 1.53 million barrels per day in 2015 to average 92.88 million, it said. For 2016 OPEC expects an increase of 1.25 million barrels per day, unchanged from last month's forecast, to 94.13 million.

The crude oil production in the Organization of the Petroleum Exporting Countries (OPEC) surged by 230,000 barrels on a daily basis, reaching 31.7 million barrels in November.

In last Friday's meeting, OPEC did not announce a top production limit on the daily 30 million barrels of oil unlike in previous meetings. Instead, it said that member countries would continue their de facto production levels, whereupon oil prices entered a rapid downward trend and dropped to its lowest level in the past seven years on Wednesday.
RELATED TOPICS