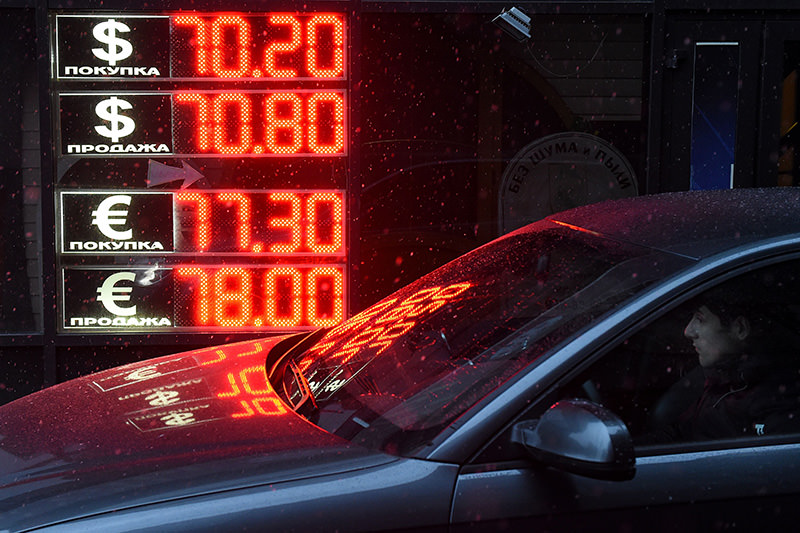 by Anadolu Agency Dec 15, 2015 12:00 am
Due to a 65 percent fall in prices since mid-2014, economies of oil producing countries that are highly dependent on oil sales for revenues are likely to be affected next year if prices reach $30 a barrel.

Goldman Sachs announced in January this year that it anticipated oil prices would fall as low as $30 per barrel due to oversupply and low global demand.

The international investment bank revised this forecast in September, and stated that if the current high level of oil stock persists, oil prices could fall to $20 a barrel next year.

Such a forecast puts pressure on major oil producing countries, especially on those that have high production costs and are largely dependent on revenues generated from oil sales.

The full cycle production costs -- all costs associated with production excluding dividends or interest on debt payments -- are estimated to be in the $40-50 per barrel range on average for Russia. While the U.S. shale basins are projected to be around $55-60 per barrel, new Canadian oil sands projects are around $70-80 per barrel.

This amount is estimated to be around $60-70 per barrel in Venezuela, $25-35 a barrel in Nigeria, and around $20-30 in Middle Eastern countries such as Iraq and Saudi Arabia.

Siluanov also stated at the end of November that Russia has already lost around $90-100 billion due to low oil prices.

Russian Deputy Finance Minister, Maxim Oreshkin, said last week that if oil prices fall below the $40 per barrel mark, the Russian economy could have a budget deficit of around 1.5 trillion rubles ($22 billion).

Oreshkin had noted last year that Russia's revenues decrease $2 billion for every $1 decline in the price of crude oil.

Meanwhile, Russia is anticipated to withdraw 2.1 trillion rubles ($31 billion) from its sovereign wealth funds in 2016.

Venezuela's former president Nicolas Maduro announced in October that oil prices should be around $88 per barrel in order to continue investments in the oil sector.

In addition, the country's finance minister, Rodolfo Marco, stated that the country's 2016 budget is designed at a base price of $40 per barrel for oil.
Venezuela's budget for next year, which was announced at the beginning of October, calls for expenditure of $247 billion.

The government anticipates that the Venezuelan economy's inflation rate will reach 85 percent for this year, and 60 percent for next year.

Against plummeting prices, major OPEC countries have increased their production levels in order to mitigate the negative impacts of low prices on their economies that are highly dependent on revenues generated from oil sales.

Since last year, Iraq managed to increase its oil production by one million barrels per day (mbpd).

Although the country is struggling with fighting against Daesh militants, it produced an average of 3.3 mbpd of oil in 2014. The country increased this level to 4.3 mbpd in November this year.

The Iraqi budget for 2016, which is around $94 billion, anticipates oil prices will average $45 per barrel next year.

Meanwhile, Iran is also planning to increase its oil output next year if sanctions on the country are lifted.

Tehran has said on various occasions that it aims to raise production levels by one mbpd within six months after sanctions are lifted.

Although Iran has not yet announced a budget for 2016, it is assumed that it will be based on a price somewhere between $42-50 per barrel.

However, this level was around 3.6 mbpd in 2011 before sanctions affected the country's oil output negatively.

Saudi Arabia, the world's largest oil exporting country, has also increased its oil output, to as high as 10.3 mbpd this year, from the average of 9.7 mbpd in 2014.

Riyadh's strategy was to compensate for the negative effect of falling prices, but had more to do with driving out high-cost non-OPEC oil producing nations from the global market.

While Saudi Arabia is forecast to have a deficit of $100 billion in its budget for this year, the country is safe for now, thanks to its sovereign wealth fund of more than $650 billion.

Nigeria, the biggest crude oil producer and economy in Africa plans to determine its 2016 budget at a base price of around $35-40 per barrel of oil.

The country also expects to spend a total of 2.6 billion for fuel subsidies in its budget for next year, which will be finalized this month.

Low oil prices have hit producers in North America the most. In the U.S. and Canada, oil production is not concentrated under the central government, but is composed of thousands of oil firms ranging in scale from small to large.

Major oil companies in the U.S. announced in October that during the first nine months of this year, their capital expenditures fell between 7 percent to 63 percent, compared to the same period last year.