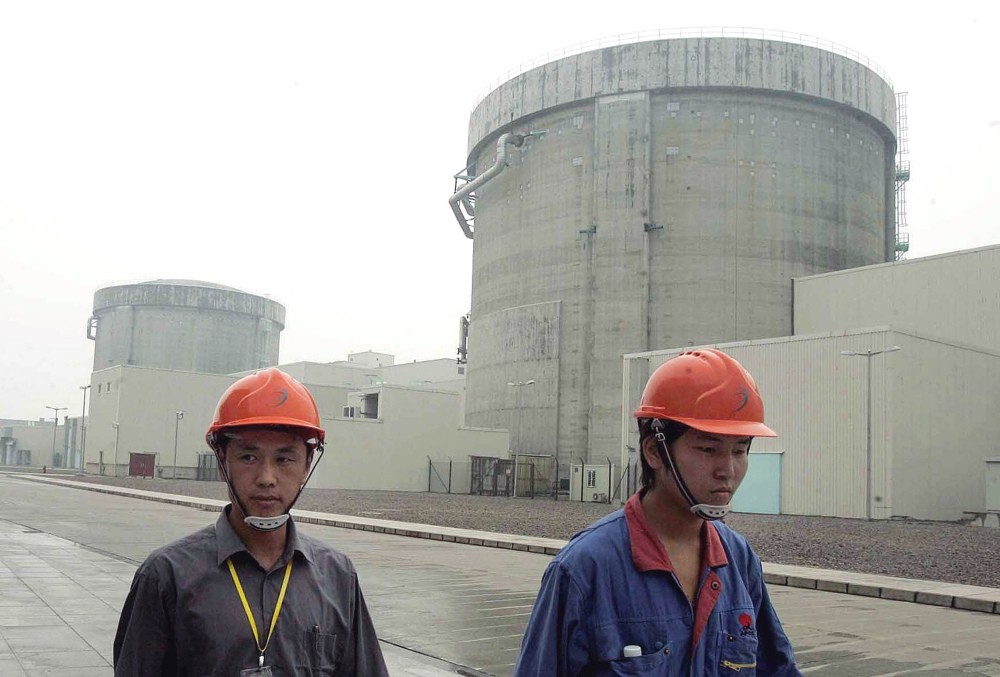 Workers walk past a part of the Qinshan No. 2 Nuclear Power Plant, China's first self-designed and self-built national commercial nuclear power plant in Qinshan, about 125 kilometers southwest of Shanghai, China.
by Associated Press Aug 25, 2016 12:00 am

The Hualong One, developed by two state-owned companies, is one multibillion-dollar facet of Beijing's ambition to compete with the U.S., France and Russia as an exporter of atomic power technology

On a seaside field south of Shanghai, workers are constructing a nuclear reactor that is the flagship for Beijing's ambition to compete with the United States, France and Russia as an exporter of atomic power technology. The Hualong One, developed by two state-owned companies, is one multibillion-dollar facet of the Communist Party's aspirations to transform China into a creator of profitable technology from mobile phones to genetics. Still, experts say Beijing underestimates how tough it will be for its novice nuclear exporters to sell abroad. They face political hurdles, safety concerns and uncertain global demand following Japan's Fukushima disaster.

China's government-run nuclear industry is based on foreign technology but has spent two decades developing its own with help from Westinghouse Electric Co., France's Areva and EDF and other partners. A separate export initiative is based on an alliance between Westinghouse and a state-owned reactor developer. The industry is growing fast, with 32 reactors in operation, 22 being built and more planned, according to the World Nuclear Association, an industry group. China accounted for eight of 10 reactors that started operation last year and six of eight construction starts. Abroad, builders broke ground in Pakistan last year for a power plant using a Hualong One, supported by a $6.5 billion Chinese loan. Also last year, Argentina signed a contract to use the reactor in a $15 billion plant financed by Chinese banks.

Sales come with financing from state banks, a model that helped Chinese companies break into the market for building highways and other public works in Africa and the Middle East. State-owned companies also are lining up to invest in nuclear power plants in Britain and Romania.

At home, Beijing faces public unease about nuclear power following an avalanche of industrial accidents and product safety scandals. This month, thousands of residents of Lianyungang, north of Shanghai, protested after rumors spread that a facility to process nuclear waste might be built there. Authorities said the city, home to one of China's biggest nuclear power plants, was only one of several being considered. After more protests, they announced the search for a site was suspended. Overseas, China's nuclear companies face questions over their status as arms of the state.

The Hualong One under construction in Fuqing, near the southeastern city of Fuzhou, is a hybrid created by CGN and its main rival, China National Nuclear Corp., after they were ordered in 2011 to merge two competing reactors into a single export product. CNNC is installing two Hualong One reactors at the Fuqing Nuclear Power Plant, due to go online in 2019 and 2020. The power station also has two Areva units and is building two more. CGN is building its own version in Fangchenggang on the southern coast near Vietnam and says it wants to seek British regulatory approval of the Hualong One design for possible use in a power plant in Bradwell on Britain's east coast. Chinese companies couldn't export models they developed because foreign companies owned the underlying technology. So last year, Beijing declared nuclear power one of 16 "national science and technology projects," with generous financial support to develop homegrown know-how. The ruling party's latest five-year development plan calls for China to have 58 gigawatts of nuclear generating capacity by 2020 and another 30 gigawatts under construction. By 2030, it wants 120 to 150 gigawatts of nuclear capacity supplying 8 to 10 percent of China's power.
RELATED TOPICS