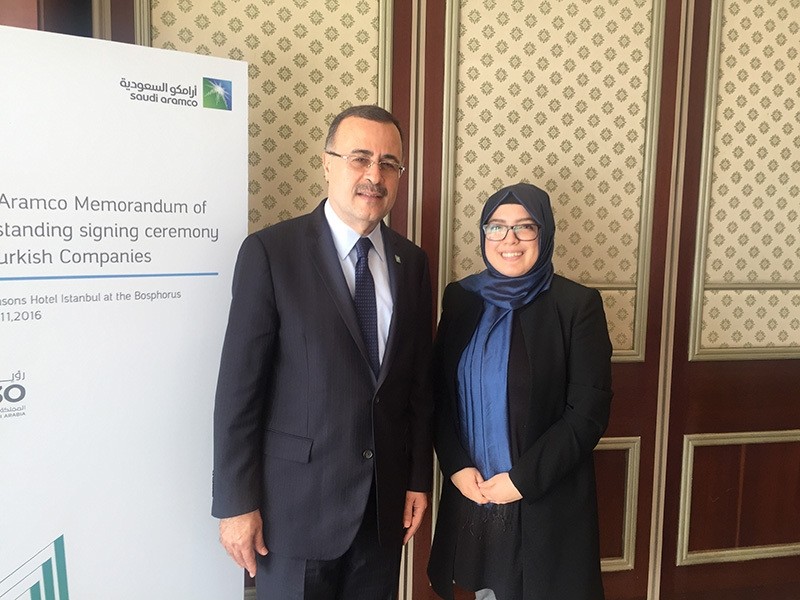 by Merve Aydoğan Oct 12, 2016 12:00 am
The 23rd World Energy Congress continues in Istanbul with the attendance of key figures in policy making and 265 speakers from 82 countries in more than 60 meetings. The President and CEO of Saudi Aramco, Amin H. Nasser, told Daily Sabah Tuesday that his company is looking at further opportunities in Turkey. He also noted that no final decision has been made regarding the partial privatization of Aramco shares and underlined that it is expected to be finalized by 2018.

Saudi Aramco had signed a series of Memoranda of Understanding (MoU) with 18 Turkish industrial enterprises yesterday, adding new potential partners to the company's slate of future capital projects, promoting diversification and infrastructure enhancement towards "Saudi Vision 2030." Nasser said, "The MoUs will help further the development of business opportunities between the two countries and we look forward to working with Turkish firms on future projects. These efforts continue to underscore the commitment by Saudi Aramco towards achieving 'Saudi Vision 2030'."

Nasser continued by emphasizing the necessity of localization as he added that, "we [Aramco] will double the percentage of locally-produced energy-related goods and services to 70 percent by 2021. This is a great opportunity for Turkish companies, particularly, to bring their expertise and invest in the Kingdom's future."

While countries are seeking to diversify their energy sources and focus on securing their energy supplies, Saudi Aramco is aiming to establish new technologies which focus on cost efficiency. In this respect, the Saudi Minister of Energy, Industry and Mineral Resources, Khalid al-Falih, had noted at the beginning of the congress that Aramco was also conducting research towards new technologies. Providing further information, Aramco CEO Nasser told Daily Sabah that the Saudi Arabian Oil Company has research technology offices worldwide and that there is work on establishing "smart water" projects. Regarding the partial privatization of Saudi Aramco, Nasser said, "There is no decision on which market to list on; we will definitely be listing in Saudi Arabia, but we are at the same time looking at others like New York, London, Hong Kong and Tokyo. Still, we are looking to finalize by 2020."

Speaking at the World Energy Congress in Istanbul, Nasser additionally affirmed that nearly five percent of Saudi Aramco's share capital is expected to be sold in the Initial Public Offering (IPO) while emphasizing that the final decision lay with Deputy Crown Prince Mohammed Bin Salman. He noted that, despite the current period of low oil prices, markets had started to recover.

Nasser emphasized that Saudi Aramco took a long-term view with $300 billion (270 billion euros) of investments planned in the next decade, focused on gas. "We are optimistic that the markets have started to recover and we expect them to recover even more in 2017," he said, adding, "I think the time in 2018 will be almost just right (for the IPO)."
Last Update: Oct 12, 2016 9:40 am
RELATED TOPICS