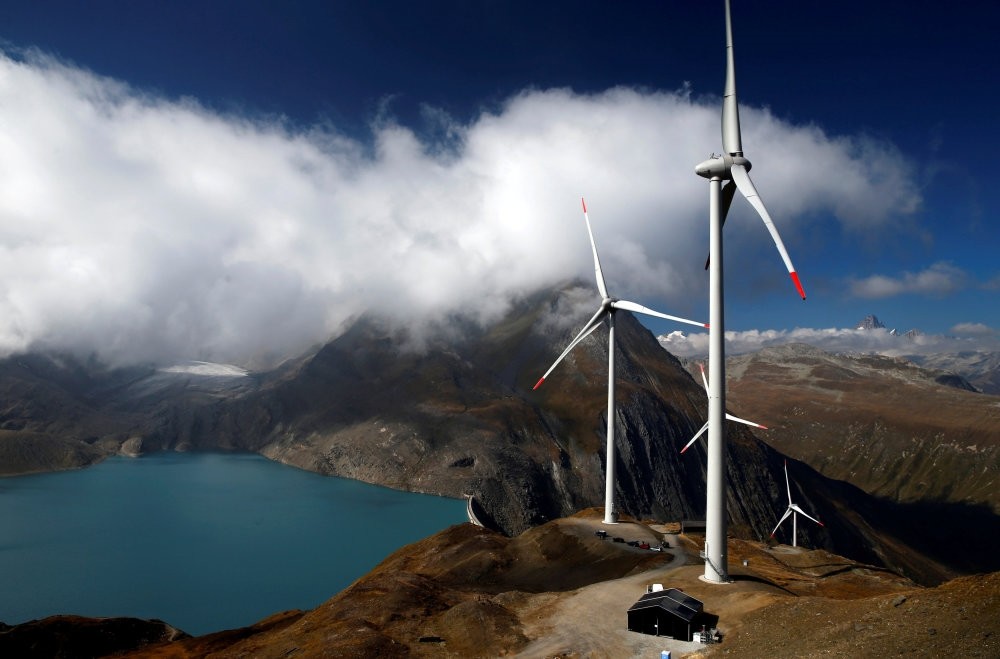 Wind turbines are pictured at Swisswinds farm in Gries, Switzerland. Governments are tapping the trend, selling green bonds to fund projects such as wind farms or low-carbon transport, with Poland, France and Nigeria making their debut this year.
by Apr 03, 2017 12:00 am

The $23 trillion ‘sustainable, responsible and impact' investment sector has received a rush of money since the Paris climate agreement. But some sceptics allege that this is just a ‘green halo' marketing effort

Investors are ploughing ever more into ethical funds to back their views on issues such as global warming and gender equality, but such investments can be confusingly similar to standard funds, except for higher fees and 'green halo' marketing. The $23 trillion "sustainable, responsible and impact" (SRI) investment sector has received a rush of money since the Paris climate agreement and, more recently, in protest against U.S. President Donald Trump's plans to slash environmental regulations. Europe is the dominant region for such investments, with $12.04 trillion, followed by the U.S. with $8.72 trillion, while Asia lags some way behind.

U.S. investors have poured $1.8 billion into actively managed U.S. equity funds in the socially responsible category from November to January, according to Lipper data, while other funds saw a net outflow of $133 billion. Even in fossil-fuel-rich Australia and New Zealand, SRI investment rose from $148 billion to $516 billion between 2014 and 2016, and from $729 billion to $1.09 trillion in oil-rich Canada, according to the Global Sustainable Investment Review released on Monday. Gavin Goodhand, a portfolio manager at Sydney-based Altius Asset Management, said the company's sustainable bond fund tripled shortly after the 2015 climate accord, where nearly 200 countries signed up to measures designed to curb greenhouse gas emissions.

Governments are also tapping the trend, selling green bonds to fund projects such as wind farms or low-carbon transport, with Poland, France and Nigeria making their debut this year.

Some managers, however, are sceptical.

"While environmental, social and governance factors should always factor into investment decisions, this is largely a marketing exercise," said Steve Goldman, a global portfolio manager at Sydney-based Kapstream Capital, which has A$10 billion ($7.6 billion) of fixed-income assets. Goldman said Kapstream did not have a responsible investment fund because its clients had not asked for it. The bond market does not have commonly agreed standards or criteria for what constitutes a green bond, and there is no guarantee the proceeds actually go to the low-carbon project as claimed.

There are similar concerns over equity products.

Stuart Palmer, head of ethics research at Australian Ethical Investment, said there was a danger that some marketing departments would "greenwash" their products to lure investors into funds that were little different to standard products.

"The concern is, do they represent real change, or are they a marketing exercise?" said Palmer.

There are no agreed definitions on what is considered ethical, sustainable and socially responsible, but ethical investors are typically expected to cough up higher fees. For example, retail investors pay more than a third higher fees for the sustainability and ethical funds at Sydney-based BT Investment Management (BTIM) than for its standard share fund equivalent. The three funds hold six or seven of their top-weighted stocks in common, including major banks Australia and New Zealand Banking Group, Westpac Banking Corp, National Australia Bank and miner BHP Billiton , according to December filings.

For investors, it can be a minefield.

"I find it difficult as a consumer to do the due diligence I would like to do because even the ethical funds are not always totally transparent about what they define as ethical," said retail investor Meraiah Foley, a Sydney academic. "One of the ethical funds I have invests very heavily in retail banks in Australia, and those banks themselves may be underwriting projects that the fund itself would not invest in."

There is also no standard practice on what to do when an existing fund stock breaches a manager's policies. Some investment managers will sell, but others argue they can influence behaviour by retaining their shareholding.