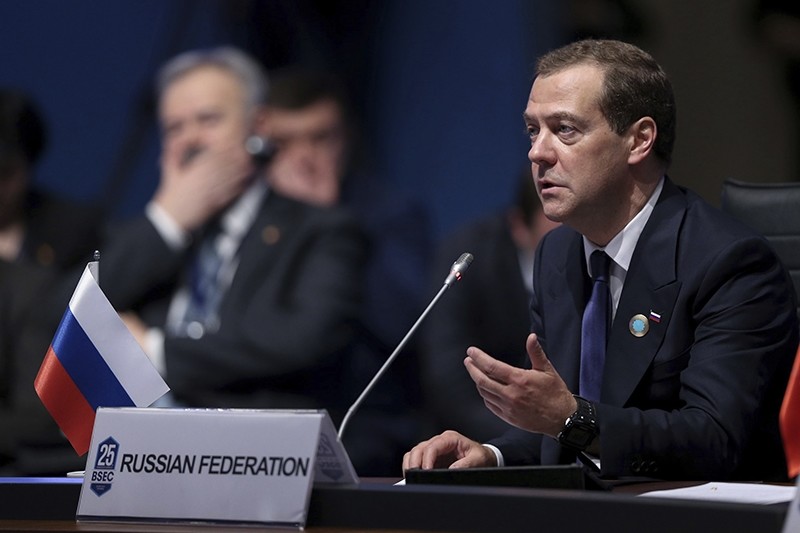 Russian Prime Minister Dmitry Medvedev said Monday that Russia is discussing an entry point for the "Turkish Stream" pipeline to Europe with Bulgaria and Greece.

Speaking to journalists at the 25th-anniversary summit of the Organization of the Black Sea Economic Cooperation (BSEC) in Istanbul, Medvedev reminded that the construction of the underwater part of the gas pipeline has already started, but that the implementation of the plan depends on the decisions of European states.

According to the Russian prime minister, the construction plan includes two separate lines; one exclusively for the Turkish market, and another for European countries.

Medvedev also emphasized that the "Turkish Stream" is a "strictly" economic project and not a political one.

"We are not trying to make anyone accept us. We proceed from the fact that this is a mutually beneficial project, and necessary decisions must be made," the Russian prime minister said.

The Turkish Stream project is designed to transfer Russian natural gas to Europe via the Black Sea and Turkey. Under Russian state-owned energy giant Gazprom's plans, the Turkish Stream pipeline will have a total capacity of 63 billion cubic meters a year.

In October 2016, President Recep Tayyip Erdoğan and his Russian counterpart Vladimir Putin signed an inter-governmental agreement on realizing the construction of the planned gas pipeline.