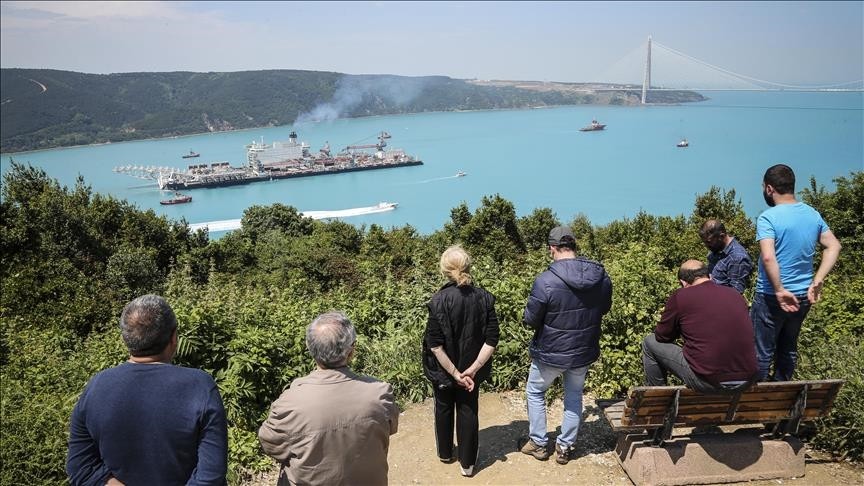 ,Pioneering Spirit, a pipelayer and construction vessel passes through Bosphorus on its way to Anapa Port of Russia where it will work on the TurkStream offshore gas pipeline installation, in Istanbul, Turkey on May 31, 2017. Anadolu Agency Photo
by Daily Sabah with AA Jun 09, 2017 12:00 am

Turkish public support for the TurkStream natural gas pipeline project rose to 75 percent in 2017 compared to 56 percent in 2015, according to new polls conducted by an independent firm.

According to StratejiCo, an independent corporate and public affairs consultancy firm, the poll results demonstrated the Turkish public's belief that the TurkStream project would benefit the country.

The poll, conducted via telephone interviews with 2,407 participants, showed that 68 percent of the local community in the Turkish northwestern cities of Tekirdağ, Edirne and Kirklareli approved of the project, while the approval rate for it stood at 65 percent in 2015.

The contribution to Turkey's energy supply security, the opportunities to expand the use of natural gas as an energy source along with other economic advantages were stated as the main reasons for the support detailed in the poll results, the firm said.

Additionally, the Turkish people's endorsement of the use of natural gas also increased, the firm said, adding that while this support was 57 percent back in 2015, the current support jumped to 87 percent.

This increased backing was also reflected in the construction of new pipelines in the country, according to the firm.

"Today [in 2017], 85 percent of both general and regional public opinion is positive about such projects," it noted.

"When looking at regional developments the first line of the TurkStream project, which will directly carry gas to Turkey and decrease the risks of transit gas, will play a key role in Turkey's energy security. Therefore, these results are very important," Mehmet Öğütçü, chairman of the Bosphorus Energy Club, was quoted as saying.

The TurkStream is a transit-free export gas pipeline, which will not only stretch across the Black Sea from Russia to Turkey but will further extend to Turkey's border with neighboring countries.