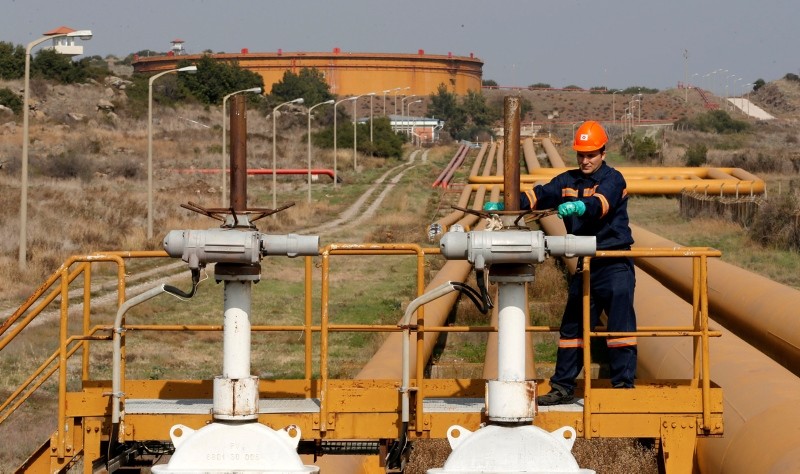 A worker checks the valve gears of pipes linked to oil tanks at Turkey's Mediterranean port of Ceyhan, which is run by state-owned Petroleum Pipeline Corporation (BOTAu015e), some 70 kilometers (43.5 miles) from Adana, February 19, 2014. (Reuters Photo)
by reuters
Jul 02, 2018 12:00 am

"The decision to restart exports depends on the results of the talks," Luaibi was quoted by al-Sabah as saying.

Production from Iraq's Kirkuk oilfields is currently at 220,000 barrels per day, which is entirely diverted to local refineries, Luaibi said.

Exports from Kirkuk's oilfields were halted after an Iraq military offensive to retake the disputed territories which had come under Kurdish control in 2014.

The offensive was a response to the independence referendum held on Sept. 25 by the semi-autonomous Kurdistan Regional Government (KRG), which Baghdad opposed.

Kirkuk oil exports had been transported by a Kurdish-operated pipeline that connects to the twin Kirkuk-Ceyhan pipeline at Khabur on the border with Turkey.

Iraq also agreed last year to ship crude from Kirkuk to Iran for use in its refineries, after which Iran would deliver the same amount of oil to Iraq's southern ports.

Kirkuk is one of the biggest and oldest oilfields in the Middle East, estimated to contain about 9 billion barrels of recoverable oil, according to British Petroleum.