Turkish drilling in Eastern Mediterranean in compliance with international law 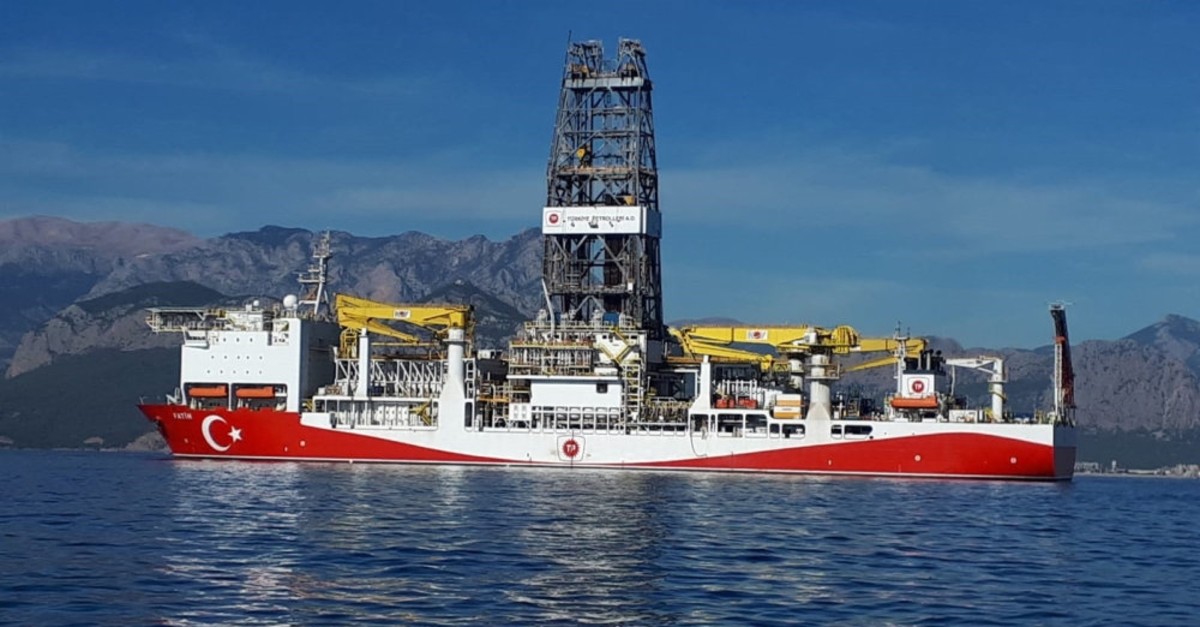 Turkey sent its drilling vessel Fatih toward its exclusive economic zone west of the island of Cyprus on Friday to launch drilling of its second well in the Eastern Mediterranean. The vessel will continue operations until Sept. 3.
by Daily Sabah with AA
May 08, 2019 12:12 am

Having registered its exclusive economic zone with the United Nations, Turkey's drilling and seismic survey operations on its own continental shelf fully abides by international law, the Energy Ministry said

Turkey dispatched its drilling vessel Fatih on Friday from the southern port of Antalya with three support vessels and a frigate toward its exclusive economic zone west of the island of Cyprus to launch drilling second well in the Eastern Mediterranean. The vessel will continue operations until Sept. 3. Determined to protect its rights in the region, Turkish authorities stressed that any comment from the outside actors such as the U.S. or the European Union are not acceptable and Turkey will continue carrying out exploration and drilling activities in accordance with the rights bestowed with international law.

The Energy and Natural Resources Ministry yesterday censured the comments from the U.S. Department of State and EU on Turkey's drilling operations in the Eastern Mediterranean.

President Recep Tayyip Erdoğan also stressed that Turkey is following its own agenda in the Eastern Mediterranean.

"As a guarantor country, we are committed to protecting our rights and the rights of the Turkish Cypriots in the Eastern Mediterranean," Erdoğan said. "Turkish Cypriots have a right to equal share of any hydrocarbon resource in the area and we are fighting to protect those rights." The ministry emphasized that the seismic surveys of the Barbaros Hayreddin Paşa and drilling operations of by the Fatih in the Eastern Mediterranean are based on Turkey's legitimate rights ensuing from international law.

Fatih will conduct exploratory activities at longitude 31 29 25 E and latitude 34 55 32 N. The Fatih started well-drilling operations in late October 2018 off the coast of Antalya, a Mediterranean coastal province. While the 229-meter vessel can drill to a maximum depth of 12,192 meters, the first well will reach a depth of 5,500 meters. To expand operations, state-run oil company Turkish Petroleum (TP) bought a second drillship, the Yavuz, and will begin drilling wells in the region soon. A twin of the Fatih, the sixth-generation drillship Yavuz was bought for $262.5 million and has a length of 229 meters and a weight of 21,283 gross tons.

In response to statements made by internal and external actors on objections to Turkey's activities, the ministry said the country's energy diplomacy is not conducted on the basis of commercial interests.

"Turkey is well aware that natural resources can play an important role in increasing peace and stability," the statement read. "Our country advocates the role of energy as a source of peace rather than as a source of conflict."

The ministry said that the country's energy policy, which attaches importance to both Turkey's and Europe's energy supply security, should be viewed as a benefit to all.

In March, Turkey's Permanent Representative to United Nations Feridun Sinirlioğlu again stressed in a letter that Turkey has sovereign rights in the maritime areas of the Eastern Mediterranean that are west of meridian 32 degrees 16 minutes 18 seconds longitude. Within the scope of the outer limits of Turkey's exclusive economic zone, "the activities of the Turkish research vessel Barbaros Hayreddin Paşa and its supporting vessels under reference fall entirely within Turkey's continental shelf in the eastern Mediterranean Sea, where Turkey exercises ipso facto and ab initio exclusive sovereign rights and jurisdiction stemming from international law," Sinirlioğlu wrote.

Turkey, as one of the guarantor powers on the island of Cyprus, along with Greece and the U.K., has consistently contested the Greek Cypriot administration's unilateral drilling in the Eastern Mediterranean while asserting that Turkish Cypriots also have rights to the resources in the area.

"We invite you to take advantage of our country's win-win approach instead of fueling regional conflicts by taking steps that increase uncertainty and escalate tension," the ministry said.

The island has seen an on-and-off peace process in recent years, including the collapse of a 2017 initiative in Switzerland held under the auspices of the guarantor countries.

Turkey has announced its continental shelf to the international community and registered it with the United Nations.