Turkey becomes an increasingly competitive market for US, Russian gas 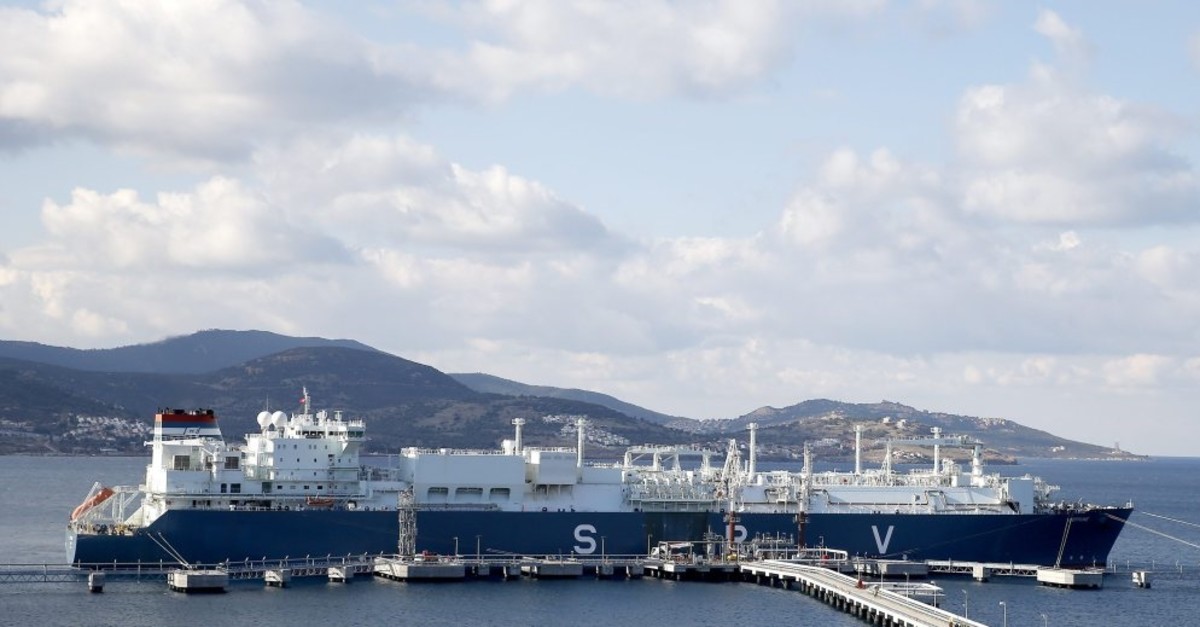 Turkey's first floating storage and regasification unit with a regasification and send-out capacity of 6 billion cubic meters began operating in December 2016 in the industrial district of Aliau011fa in u0130zmir.
by Elif Erşen
May 29, 2019 12:14 am

With a growing spot capacity and evolving gas trading stock exchange, Turkey is the largest gas market in its region and quickly becoming hot for the competition from major pipeline and LNG producers

In the last 25 years, Turkey has carried out and participated in various multibillion-dollar energy projects with the goal of diversifying its suppliers and reinforcing its energy infrastructure with regasification facilities. As the country's infrastructure developed, boosting the storage capacity, it has begun to capitalize on the advantage of multiple suppliers, be it pipeline producers or liquefied natural gas (LNG) exporters. A significant gas importer with 50 billion cubic meters per year, Turkey therefore has evolved into an attractive gas market for big producers, including the U.S., Russia and Qatar. In an environment where the global gas market is witnessing a glut from the biggest producers, Turkey is aspiring to benefit from this buyers' market where price arbitrage between different markets promises new opportunities for importers.

In almost all of the recent discussions on Turkey's energy security and policies, experts cannot help but highlight the fact that the country's gas market is allowing more competition among main exporters since the infrastructure developments, including a vast network of pipelines and significant LNG facilities, grant Turkey the benefit of choice. A recent meeting jointly organized by the Atlantic Council Turkey, Turkish Policy Quarterly (TPQ) and the Turkish Industry and Business Association (TÜSİAD) last Thursday elaborated on the Turkish energy market, witnessing the Turkey launch of the TPQ issue on "Turkey's Energy Nexus: Discoveries and Development."

While a significant part of the discussions commended Turkey's diversification and liberalization efforts with the Trans-Anatolian Natural Gas Pipeline (TANAP) – the biggest part of the Southern Gas Corridor (SGC) – and TurkStream pipeline with Russia in addition to storage and regasification facilities, floating storage and regasification units (FSRUs), its capacity to create a competitive market as an importer was also emphasized.

Turkey's former ambassador to the Organization for Economic Co-operation and Development (OECD), Mithat Rende, in his expansive elaboration on the Turkish energy developments, remarked, "It is important for Turkey to expand its storage capacity and to have more LNG because it will improve competitiveness." Considering the recent rise in Turkey's LNG imports from the U.S., Rende emphatically stated that Turkey will have more LNG coming from the North American country, which has been enjoying an output spike thanks to the unconventional shale gas.

Rende's statement came as a striking response to the claim of Erica Olson, economic counselor at the U.S. Embassy to Turkey, that when U.S. LNG imports are concerned, market forces and geopolitical forces are coming together. "Pricing will still be very relevant especially for a country like Turkey when Asian markets remain at a higher level," Olson said. 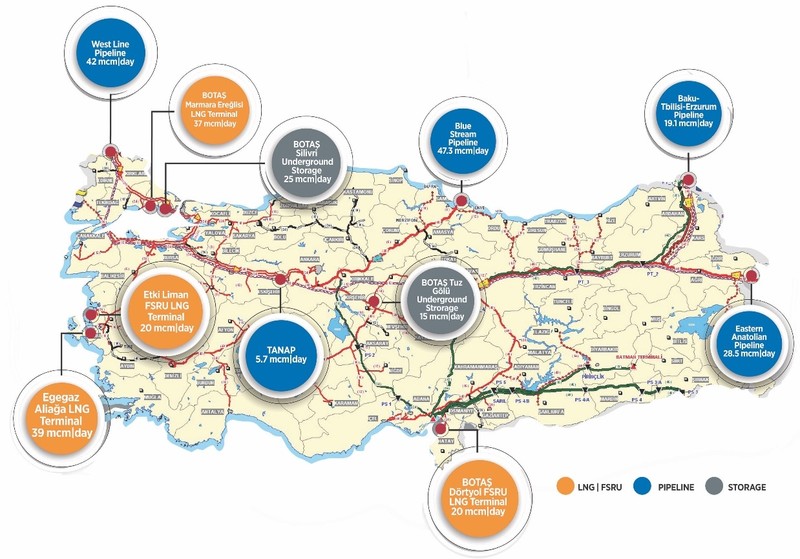 Recently, though, price dynamics have begun to change as Asian prices slumped last week, and the price spreads between Europe and Asia shrank to below 50 cents from over $1 earlier in May, reducing opportunities for spot trade between the Pacific and Atlantic basins.

At the end of April, an energy consultancy company Stratas Advisors reported that "for the first time in more than three years, the Northeast Asian spot price has dipped below the Dutch TTF marker, presenting a new dynamic."

With changing price dynamics and the increasing availability of more affordable LNG in global markets, the competition between the dominant producers has grown more fierce. The price competition between the U.S. and Russia had already begun when the latter's energy giant Gazprom responded to the opening of the Lithuania regasification terminal by discounting its gas price by 23% in 2015. Although Gazprom is still the dominant gas supplier for the European market, U.S. LNG exports to the continent surged 272% in the period of July 2018 and March 2019, the European Commission said in a press release in early May. While the U.S. became the third-largest supplier of LNG to the continent, Europe has emerged as the primary destination of the U.S. LNG in the first quarter of this year. 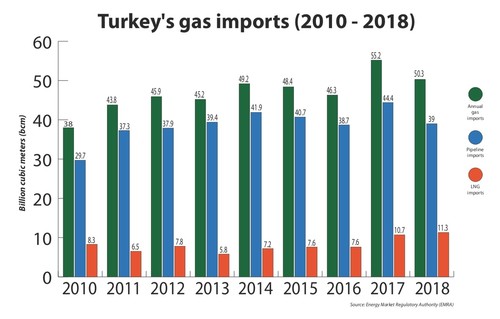 A significant detail to emphasize is the fact that Turkey became the top importer of U.S. LNG in Europe in the first quarter and ranked the eighth-largest destination for the cargo carrying the American LNG in the said period, according to the data of the U.S. Department of Energy Office of Fossil Energy.

U.S. Embassy Economic Counselor Olson later in her discussion emphasized that Turkey is already the number one importer of the U.S. LNG in Europe and acknowledged, "We continue to look for ways on how we can do more to increase cooperation between the U.S. and Turkey on LNG."

As far as LNG imports are concerned, Turkey's two main suppliers are Algeria and Nigeria, which have long-term contracts with the state-ownedPetroleum Pipeline Corporation (BOTAŞ). The gas purchases from the spot market have demonstrated a more fluctuating course over the last decade, reaching the highest level in 2017 with 4.8 billion cubic meters. While Qatar ranked first in spot purchases with 1.5 billion cubic meters, the U.S. ranked third, having exported 767.5 million cubic meters of gas to Turkey.

As Turkey expands the share of LNG in its gas portfolio, the imports of pipeline gas – tough still very dominant – have been gradually decreasing. Turkey has started to see declines in the gas imports from Russia, the main pipeline supplier with a market share of over 50% on average. While Russia sold approximately 23.6 billion cubic meters of gas to Turkey last year, its share in the total gas imports declined to 47%, according to calculations from the EMRA data. The decline certainly was not irrelevant to the falling gas imports last year.

The installation of two floating storage regasification units (FSRU), one in İzmir's Aliağa district and the other in Hatay's Dörtyol district, as well as the capacity expansion of the existing terminals allowed Turkey to have more LNG in its system. As a result, the LNG facilities are capable of regasifying 117 million cubic meters of gas per day. The reinforcement of the infrastructure has enabled Turkey to multiply its gas suppliers in addition to those who sell gas to the country on long-term take-or-pay contracts with strict destination clauses.

Ambitions for a gas trading hub

Some of Turkey's long-term gas contracts will expire in 2021, and the number of gas imports stipulated in those contracts total 15.6 billion cubic meters, corresponding to nearly 30% of the annual gas consumption. As the country is negotiating the renewal of these gas contracts, it looks for more the removal of some strictly binding terms. The private sector importers also expect that BOTAŞ may transfer some of its import licenses as the market needs for the liberalization moves in order to support the ambition to reinforce the gas trading hub launched by the Energy Stock Exchange (EPİAŞ) in September 2018 with a view to ensuring a daily price mechanism.

Although some scholars and experts claim that Turkey does not "need" to be a gas hub since it is already an important "transit" route with mega pipelines like TANAP and TurkStream. Because, they maintain, becoming a gas hub does not necessarily bring financial power. However, Melanie Kenderdine, a nonresident fellow at the Atlantic Council's Global Energy Center, emphasized the benefits of a competitive Turkish pricing point in her article entitled "The Importance of Natural Gas to Turkey's Energy and Economic Future," published in the TPQ issue on Turkey's Energy Nexus.

Speaking of the advantages of "a competitive Turkish pricing point and liquid supply source," Kenderdine emphasized that it could certainly contribute to the national economy and enhance energy security while giving Turkey "a larger stake in improving regional stability, increasing production and promoting low cost infrastructures."

While Turkey has achieved a great deal on the infrastructure side, progress toward a Turkish natural gas trading hub requires some regulatory and market changes. In addition to the continued implementation of market reforms, the unbundling of long-term contracts held by BOTAŞ is also another factor to move toward a gas hub, she argued.

Since Turkey's pipeline imports are priced on oil, the rolling average of pipeline contracts also increased last year. A market setting comprised of rising oil prices and the depreciating Turkish lira also put an extra burden on the cost of subsidies. "The creation of a natural gas hub would effectively de-link natural gas prices from oil prices, removing a significant source of gas price volatility that has little to do with the fundamentals of natural gas market," Kenderdine wrote.

Turkey's position as an important gas route to Europe has been established and will become more prominent with the launch of TANAP. In this context, a natural gas hub, Kenderdine suggested, would also allow Turkey to respond to demand from connected European purchasers and to add to the overall global supply.