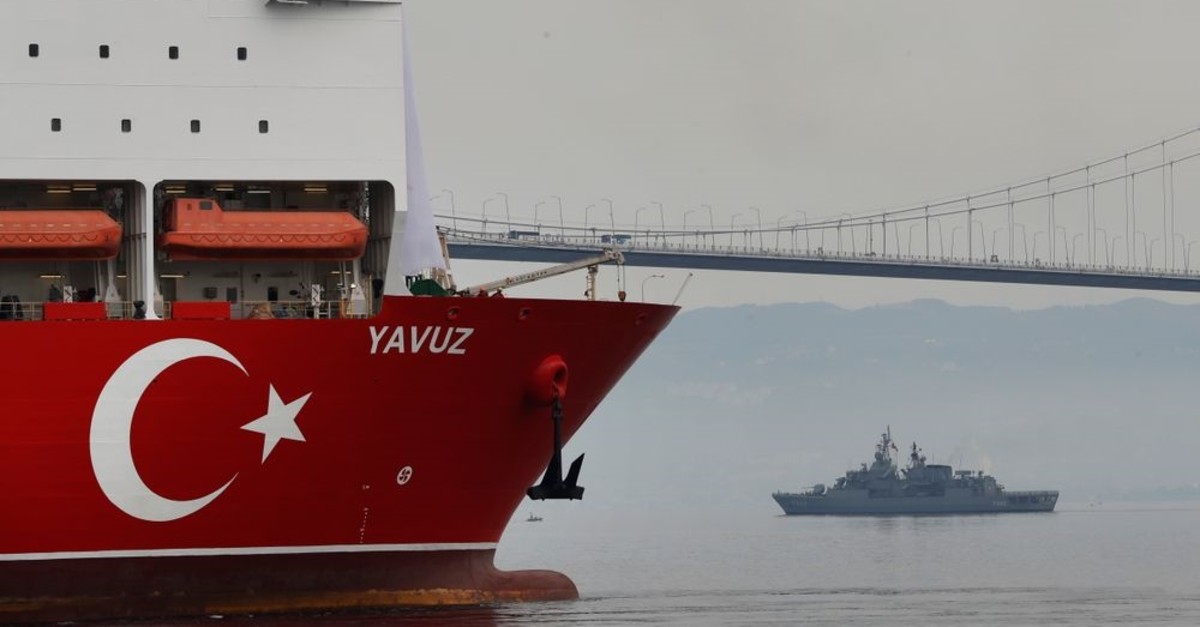 Alluding to recent sanctions threats from the EU and the U.S. over its drilling activities in the Eastern Mediterranean and the purchase of the Russian-made S-400 air defense system, Ankara says nothing can deter Turkey from its ‘just cause'

Erdoğan said this year also represents the centennial of the beginning of the Turkish struggle for independence of 1919-1923. "The Turkish War of Independence was fought against the world's strongest armies and was crowned with the Treaty of Lausanne, the seal of independence of our country," Erdoğan noted. Erdoğan also commemorated Turkey's founding father, Mustafa Kemal Atatürk, and other noble Turkish veterans and martyrs with respect and gratitude. The Treaty of Lausanne, signed by Turkey on one side and Britain, France, Italy, Greece and their allies on the other, recognized the modern Turkish state and replaced the 1920 Treaty of Sevres, an unfair pact imposed on the Ottoman Empire after World War I. "The Republic of Turkey, like a century ago, today also has the strength and determination to eradicate any threat directed toward its independence, survival, and the peace and security and safety of its citizens," he added.

"No threat of sanctions, either covert or overt, can deter Turkey from its just cause," Erdoğan warned, alluding to recent sanctions threats that Turkey has repudiated.

Turkey earlier this month slammed the EU after the EU Foreign Affairs Council adopted a conclusion on Turkish drilling activities in the Eastern Mediterranean, deciding to suspend negotiations on the Comprehensive Air Transport Agreement and agreed not to hold the Association Council and further meetings of the EU-Turkey high-level dialogues for the time being. Furthermore, the EU also suggested the European Investment Bank (EIB) review its lending program for Turkey.

EIB TO HALT LENDING IN TURKEY UNTIL YEAR-END

The EIB will not do any new lending in Turkey linked to the government until at least the end of the year while it carries out a strategy review, Reuters reported yesterday.

"As the EU Bank, the EIB will follow the council's recommendations and, notably, will take a restrictive approach toward the submission of new lending operations to its board for approval for the rest of the year," an EIB spokeswoman told Reuters.

The report also said the EIB, which is Turkey's biggest single lender, has spent between 400 million euros ($446 million) and 2.2 billion euros a year in the country over the last three years, while nothing has been invested so far in 2019.

It was also noted that the freeze is not currently expected to affect private sector projects and the bank could still sign around 350 million euros worth of deals before the end of the year if it gets the green light from EU finance ministers on the EIB board.

"A review of the bank's strategic orientations of its lending activities in Turkey is scheduled for later this year," Reuters cited the spokeswoman as saying.

Ankara has stressed that any EU funding cuts will not affect its drilling activities in the region and that EU actions against Turkey would not yield major results and are not an element of deterrence for Turkey to abandon its efforts in the region.

Turkey has made continuous efforts to protect its sovereign rights and the rights of Turkish Cypriots in the Eastern Mediterranean region, where it has been drilling in its exclusive economic zone (EEZ), which was registered with the United Nations in 2004.

It has consistently contested the Greek Cypriot administration's unilateral drilling in the Eastern Mediterranean, saying Turkish Cypriots also have rights to resources in the area.

In his message yesterday, Erdoğan stressed that Turkey's recent steps in the Eastern Mediterranean and northern Syria – including drilling for natural resources and counterterrorism operations – clearly demonstrate its determination to protect the rights of both the Republic of Turkey and its sister nation, the Turkish Republic of Northern Cyprus (TRNC).

Turkey has been at loggerheads with the U.S. for months over Ankara's planned purchase of the Russian missile defense system. In recent months, U.S. officials urged Turkey to buy the U.S. Patriot missiles, arguing the Russian system would be incompatible with NATO systems and expose U.S. F-35 fighter jets to possible Russian subterfuge.

The U.S. threatened sanctions over the purchase, with Turkey responding that any sanctions would be met in kind.

The delivery of the S-400 components began on June 12 and is currently ongoing, with 15 shipments of related equipment landing in Turkey so far. The delivery is set to continue through 2020. Foreign Minister Mevlüt Çavuşoğlu said on Monday the S-400 will come online early next year.

Last Wednesday, Washington announced it was taking Turkey out of the F-35 fighter jet program, following the threats to do so over Ankara's purchase of the S-400 and last week, the Trump administration began the process of removing Turkey from the F-35 program. The expulsion is slated to be completed by the end of March 2020.

In case it doesn't get the F-35 jets, Çavuşoğlu had said Turkey would meet its needs from other sources until it produces its own.

Turkey has been one of the major partners of the $428 billion massive defense project as its companies are contracted for the production of 937 parts of the fifth-generation stealth fighter jet and have invested $1.25 billion in the project. In the last year, the country received four F-35 jets located at Luke Air Base in Arizona where Turkish pilots and engineering staff had been participating in training until May. They are now scheduled to return home by July 31.

Lockheed Martin said late Tuesday it was working to establish alternate supply sources for F-35 parts in the United States after the Pentagon decided to remove Turkey from the fighter jet program, Reuters reported.

On a post-earnings call, Lockheed's chief executive officer reportedly said the company would be able to remove Turkey from its manufacturing supply chain by March 2020.

"We've been working to wind down the Turkish industry involvement and so we have a timeline that we're working towards... it's out through March of 2020 that we think it will all be resolved," Reuters quoted CEO Marillyn Hewson as saying.

Initially having ordered 30 F-35 jets, Turkey intended to buy 116 stealth fighter jets over the years, but following the U.S.'s decision, it will not be able to buy the jets. Hewson said several other countries such as Poland have expressed interest in becoming an alternative buyer.

The White House has yet to issue a statement. But Bloomberg yesterday cited senators who met with Trump as saying that he is considering how to respond to Turkey's decision to accept the Russian missile defense system.

One of the senators, John Cornyn, said Trump is "frustrated by what he sees as a lack of options" after Turkey began receiving parts of the S-400.

On the other hand, Bloomberg quoted Texas Sen. Ted Cruz as saying that the lawmakers generally agree that Turkey's relationship with the U.S. is important.

Cruz said the discussion was more focused on the broad objectives of getting Turkey to pull back than specific steps the U.S. should take.

Trump has been vocal about why Turkey had to buy a Russian-made air defense system, though he did not refrain from sending mixed signals.

He made a series of contradictory remarks last Thursday on whether or not the U.S. will be imposing sanctions on Turkey over its purchase of the Russian system.

Trump initially said the sanctions are not under consideration "right now," before later telling reporters "we're looking at it." The president said the situation is "very, very difficult," continuing to blame his predecessor, former President Barack Obama, for the row.

In a meeting with Erdoğan during the G20 in late June, the U.S. president also put the blame on his predecessor and underscored that the current situation with Turkey over the F-35 jets was not fair, as the country wanted to buy U.S. Patriot missiles before but Washington refused at the time. The 2017 sanctions law doesn't set any timeline for imposing sanctions or for issuing a presidential waiver, so Trump could delay indefinitely.

Turkey has so far argued that CAATSA is not applicable to its purchase of the S-400 because Ankara and Moscow signed the deal on April 11, 2017, and the U.S. president signed the bill into law in August 2017.