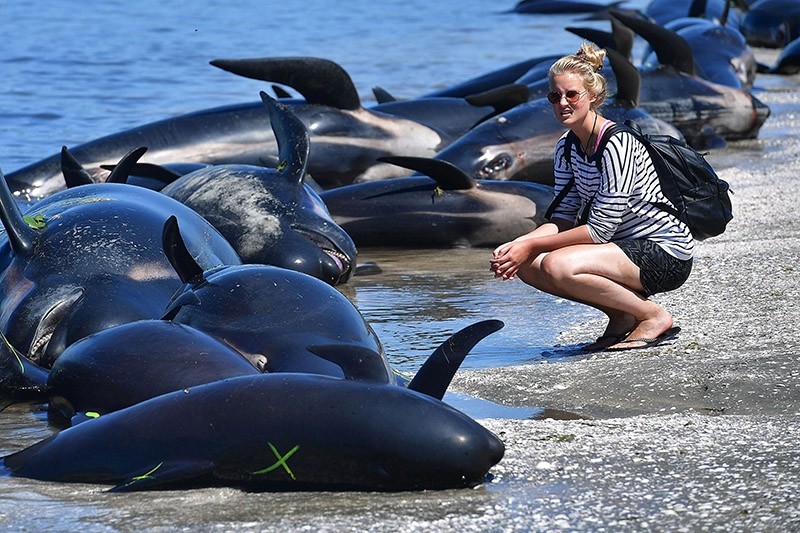 A new pod of 240 whales swam aground at a remote New Zealand beach on Saturday just hours after weary volunteers managed to refloat a different group of whales following an earlier mass stranding.

In total, more than 650 pilot whales have beached themselves along a 5 kilometer (3 mile) stretch of coastline over two days on Farewell Spit at the tip of the South Island. About 335 of the whales are dead, 220 remain stranded, and 100 are back at sea.

Department of Conservation Golden Bay Operations Manager Andrew Lamason said they are sure they're dealing with a new pod because they had tagged all the refloated whales from the first group and none of the new group had tags.

The news was devastating for hundreds of volunteers who had come from around the country to help with the initial group of 416 stranded whales that was found early Friday, many of them already dead.

Volunteers are planning to return Sunday to help refloat as many healthy whales as they can.

Lamason said about 20 of the new group were euthanized by conservation workers because they were in poor condition and more would likely need to be killed Sunday.

Rescuers had been hopeful earlier Saturday after efforts to refloat the initial group of whales had gone well, following a frustrating day on Friday.

Lamason said improved weather and crystal clear water had helped with the rescue attempt. He said about 100 surviving whales from the initial group were refloated, and dozens of volunteers had formed a human chain in the water to prevent them from beaching again.

He said volunteers were warned about the possibility of stingrays and sharks, after one of the dead whales appeared to have bite marks consistent with a shark. He said there had been no shark sightings.

Officials will soon need to turn to the grim task of disposing of hundreds of carcasses.

Lamason said one option was to tether the carcasses to stakes or a boat in the shallow tidal waters and let them decompose. The problem with towing them out to sea or leaving them was that they could become gaseous and buoyant, and end up causing problems by floating into populated bays.

Farewell Spit, a sliver of sand that arches like a hook into the Tasman Sea, has been the site of previous mass strandings. Sometimes described as a whale trap, the spit's long coastline and gently sloping beaches seem to make it difficult for whales to navigate away from once they get close.

There are different theories as to why whales strand themselves, from chasing prey too far inshore to trying to protect a sick member of the group or escaping a predator.

New Zealand has one of the highest rates of whale strandings in the world, and Friday's event was the nation's third-biggest in recorded history. The largest was in 1918, when about 1,000 pilot whales came ashore on the Chatham Islands. In 1985, about 450 whales stranded in Auckland.

Pilot whales grow to about 7.5 meters (25 feet) and are common around New Zealand's waters.