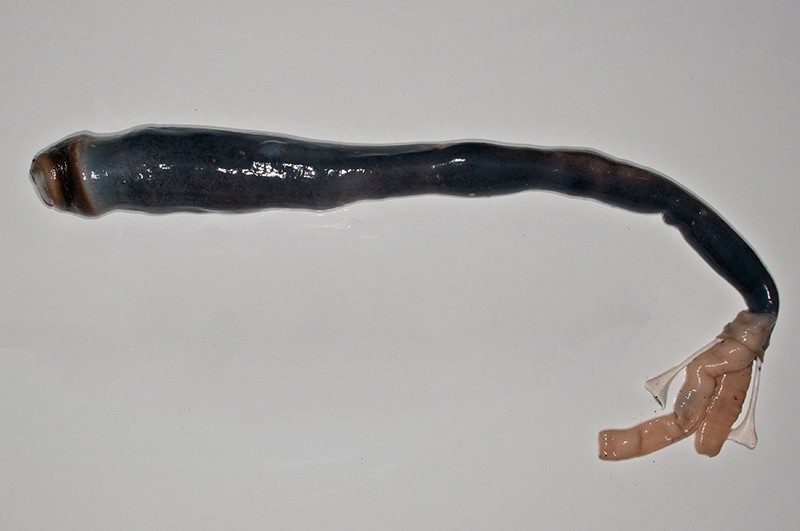 An enormous black worm that lives in the mud of the sea floor and survives on the remnants of noxious gases digested by bacteria has been unveiled by scientists for the first time.

The slimy giant shipworm can grow up to 155 centimetres (five feet) in length, despite living a sedentary life in ocean sediment and apparently eating nothing more than the waste products of the micro-organisms that live in its gills.

"We are amazed. This is the first time we saw a shipworm as large as this. Usually, shipworms are only as short as a matchstick and are white," Filipino marine biologist Julie Albano told AFP.

The shipworm is a not actually a worm at all, but a bivalve -- like mussels and clams -- and has its own brittle, tusk-like shell.

Also known by its scientific name Kuphus Polythalamia, the mollusc is radically different from its smaller shipworm cousins, which burrow in -- and digest -- wood.

Researchers who analysed the creature found that although it had its own digestive system, this was shrunken and appeared to be largely redundant.

Instead, Kuphus Polythalamia relies on bacteria that live in its gills, which digest hydrogen sulphide -- a gas that smells of rotten eggs -- from the mud and emit traces of carbon.

The process is photosynthesis in plants, where they take carbon dioxide from the air, use the carbon to grow and expel oxygen as a by-product.

"We suspected the giant shipworm was radically different from other wood-eating shipworms. Finding the animal confirmed that," said Margo Haygood, a research professor at the University of Utah who also took part in the study.

The discovery of the giant shipworm, a species never before studied, marked the first time scientists had live specimens in hand, according to an article published this week in American journal Proceedings of the National Academy of Sciences.

"This remarkable species remains to be fully described and explained," the journal said.

Albano said the giant shipworm was found in the coastal town of Kalamansig in southern Sultan Kudarat province and its bacteria are now being studied for possible pharmaceutical use.

While the odd-looking animals are new to international marine scientists, Albano said, local people have clearly known all about them for years.

"The shipworm is edible, tastes like an octopus," she said. "Locals eat it and it serves as an aphrodisiac for them."