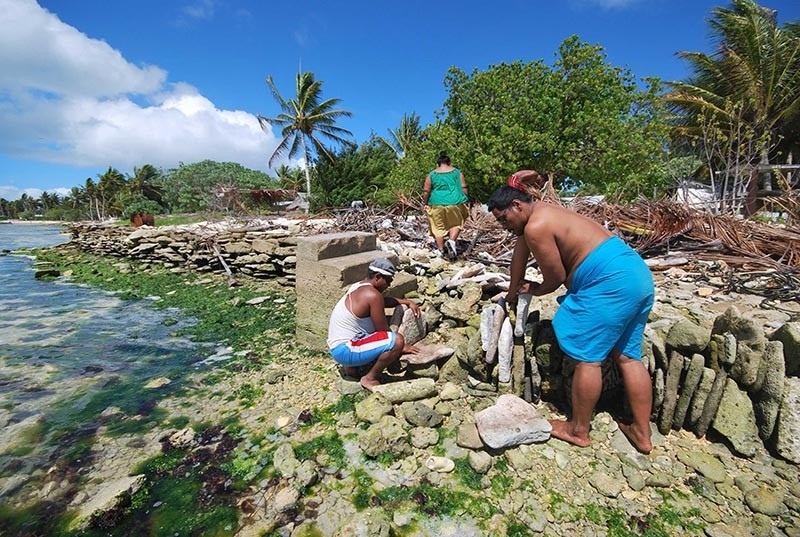 An undated handout picture released by the secretariat of the Pacific community (SPC) shows inhabitants of Kiritimati coral atoll building a stone seawall against the rising sea level (AFP Photo)
by Sep 06, 2017 12:00 am

A survey of Pacific corals has found many severely bleached, some near-dead, according to marine researchers who warned Wednesday that global warming threatened the precious ecosystem's very survival.

An in-depth probe along a 50,000-kilometer (31,000-mile) stretch of the Pacific found that up to 90 percent of some coral colonies around the Samoan islands had been bleached.

Around the Tuamotu archipelago, up to half of colonies are bleached, according to researchers on board the French research schooner Tara.

Around the islands of Tuvalu and Kiribati, sections of reef were dead by the time the team got there.

Even in more temperate waters to the north, reefs did not escape bleaching, said the team, with up to 70 percent of corals damaged around Okinawa, Japan.

"All along Tara's Pacific route, we observed coral deaths and very serious bleaching," Tara scientific director Serge Planes of the French CNRS research institute told AFP in Paris, where the report was released.

Corals make up less than one percent of Earth's marine environment, but are home to an estimated 25 percent of marine life. They act as nurseries for many species of fish.

Corals are tiny, invertebrate marine creatures that live in colonies and require algae to survive. The algae live on the corals, providing them with food and the bold colours that reefs are known for.

Corals "bleach" when they are stressed by environmental changes -- due to ocean warming or pollution. They expel the algae and turn bone-white.

If the harm is not too severe, reefs can recover from a bleaching event, although this can take many years.

Tara departed on its mission from the port of Lorient in northwest France in May last year.

It is about halfway through its mission, having visited 15 countries from east to west.

Wednesday's report was based on analysis of some 15,000 coral samples collected in 2,000 dives, and concluded that global warming is the main culprit.

The data revealed that bleaching events happen much more frequently than in the past, giving reefs less time to recover between bouts, said Planes.

"Clearly, these events are no longer associated with exceptional climate events," as in the past, when there were typically 20-25-year breaks between bleachings caused by such warming phenomena as El Nino.

Also, in sparsely populated areas like Polynesia, with comparatively little ocean pollution, warming is the only explanation for the coral damage, the team said.

"It is worrying," said Planes, adding that the data "throws into question the future of these coral reefs."

Corals are under pressure worldwide.

Meeting the warming limit set in the 2015 climate-rescue Paris Agreement may not be enough to protect Earth's coral ecosystem, warned the Tara researchers.

Nearly 200 nations agreed under the pact to limit average warming to two degrees Celsius (3.6 degrees Fahrenheit) over pre-industrial levels. A level of about 1C has already been reached.