5 elephants die trying to save drowning calf in Thai waterfall 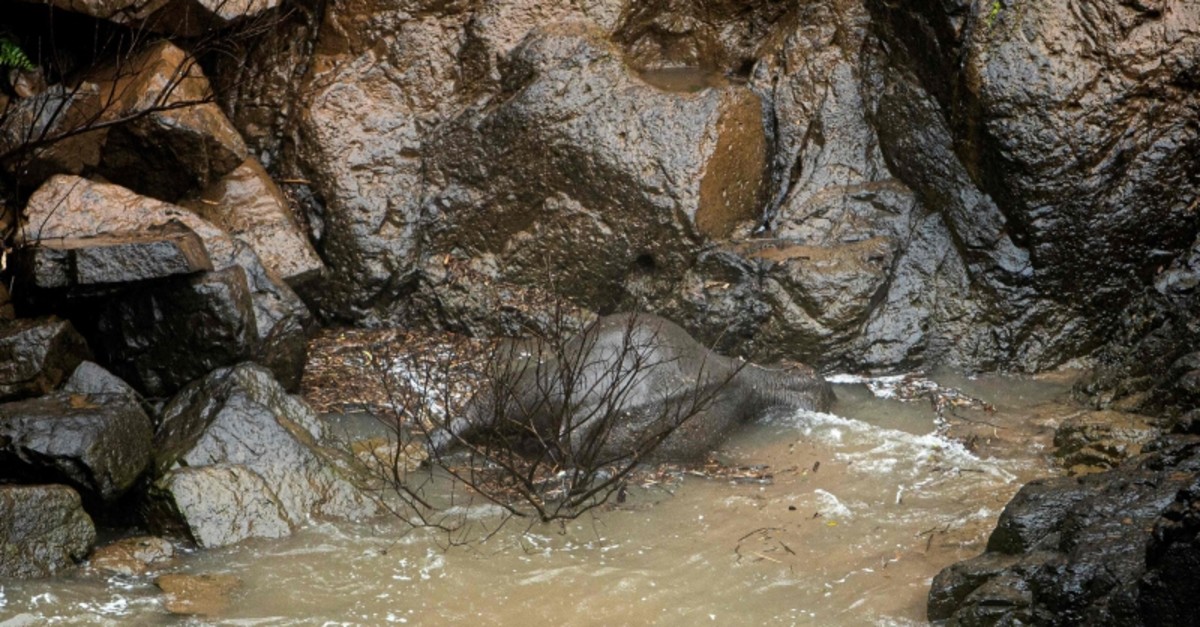 This photo by Thai News Pix taken on Oct. 5, 2019 shows a dead elephant at the bottom of a waterfall after it fell to its death at Khao Yai National Park in central Thailand. (AFP Photo)
by Compiled from Wire Services Oct 06, 2019 11:22 pm
Six elephants fell into a waterfall and drowned in Thailand, while two others survived the gushing waters after trying to save a calf, national park officials said.

Veterinarians were monitoring the conditions of the two elephants after they made it out of the water, the Department of National Parks, Wildlife and Plant Conservation said in a statement on Sunday. Officials had been planning a rescue attempt.

Park officials initially discovered a 3-year-old elephant drowning in the Haew Narok Waterfall, part of the Khao Yai National Park, about 160 kilometers north-east of Bangkok, after hearing loud elephant cries in the early hours of Saturday, the parks department said.

The two elephants had been watching the distressed infant from a cliff before stepping into the water in an effort to help.

The young elephant did not survive and officials later found five other drowned elephants on the first level of the large three-tiered waterfall, which has been temporarily closed to visitors.

Soraida Salwala, the founder of the Friends of the Asian Elephant foundation, which runs the world's first elephant hospital established in 1993, said elephants have sympathy for each other and react instinctively if it sees another in danger.

"Elephants in the same herd have a sense of caring for each other. This bond means when one of them sees another in trouble it will go in to help," Soraida told dpa.

"For example, we are a hospital and if one of them is injured or dies we have to cover it up for the others to not see it otherwise they feel shocked and it grabs their attention. They'll start looking right at it," said Soraida, who is still part of the elephant hospital's day-to-day operations.

"For elephants in the wild, their relationships are even closer because they walk everywhere together," she said.

The Haew Narok Waterfall, which roughly translates to "Hell's Cliff," was also where eight elephants from the same herd died in 1992.

In that incident, while rescue efforts were being made for a calf that fell from an over 200 meter cliff, the mother decided to enter the rushing stream, leading to her death, according to an account by Thai newspaper Thairath.

The park is home to about 300 wild elephants and is part of Dong Phayayen-Khao Yai Forest Complex, a UNESCO World Heritage site.