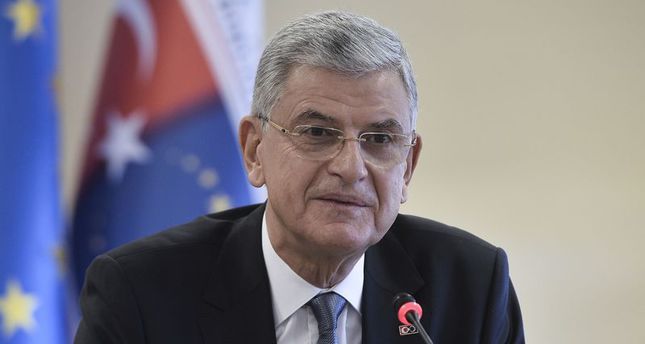 by AA Dec 23, 2014 12:00 am
EU Affairs Minister Volkan Bozkır on Tuesday criticized recent comments made by EU officials regarding a probe against what the Turkish government calls the "parallel structure," a term used to define alleged infiltration by members of the Gülen Movement in key government bodies.

A police operation was launched on December14 into senior media figures and police officers in 13 provinces across Turkey for allegedly being affiliated with what the government describes as the "parallel structure," a purported group of bureaucrats embedded in the country's institutions including the judiciary and police.

More than 20 suspects were taken into custody in the operation. All the detainees are allegedly linked with U.S.-based former imam Fethullah Gülen and the Gülen Movement, which he leads. Of the suspects, four people were arrested and sent to prison pending trial.

After the operation, some senior EU officials criticized the Turkish government for the detentions and arrests.

Bozkır said that the EU officials who commented need to get information from Turkey's EU Ministry officials before directing criticism at the government.

"I do not accept these kinds of statements from individuals and organizations without them knowing the probe operation's details," he said.

Last week, the EU's announcement on the Tahşiye operation against Gülen Movement-linked figures that started on December 14 said: "This operation goes against the European values and standards Turkey aspires to be part of."

Following the announcement, Bozkır explained the operation against Gülen Movement-linked media figures and police officers in 13 cities across Turkey to EU enlargement chief, Johannes Hahn, in a phone conversation.

"Minister Bozkır mentioned to his counterpart that the judicial process was still ongoing and that the executive was not involved in this process in accordance with the principle of the separation of powers," a statement from the Turkish EU Ministry said.

Bozkır also stressed that Turkey had opened all the EU accession chapters on its side and said the country will close all the chapters within two years.

"Opening chapters is not a problem for us – it is the EU's problem," Bozkır said. "We will be glad if they open the chapters. We have been maintaining the accession process for eight years because it is beneficial for our people."

He also announced a local government EU action plan that will be put in place between June 2015 and June 2019.