European Commission Representative to Cyprus: EU tireless in solving the issue on the island 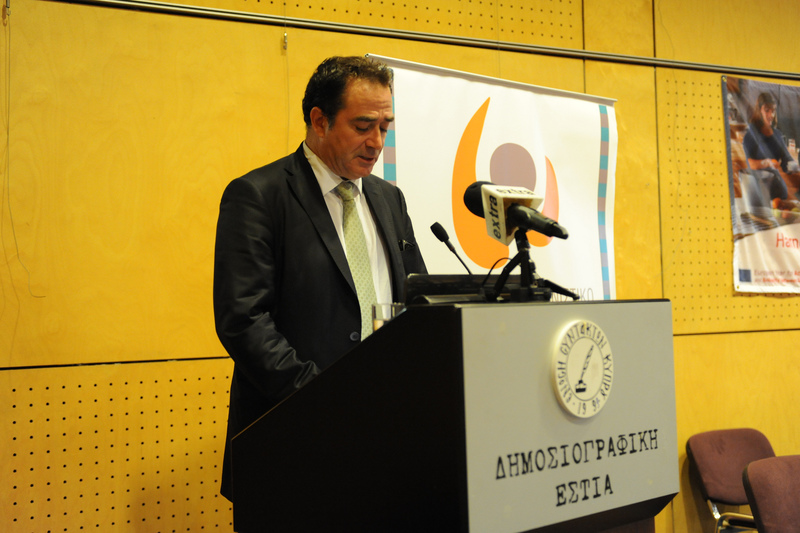 by Emre Diner Mar 24, 2015 12:00 am
Georgios Markopouliotis, the head of the European Commission Representation in Cyprus, told Daily Sabah that the EU is determined to solve the issue of divided Cyprus and added that the 28-bloc union has so far spent 381 million euros in efforts to reunify the Greek and Turkish residents of the island.

DS: What's the total amount the EU has spent for peace on Cyprus so far?

GM: The EU has been actively supporting efforts aiming to bring the two communities of the island closer. To this end, and in order to end the isolation of the Turkish Cypriot community and to help prepare for reunification, the EU approved in 2006 a financial assistance program for Turkish Cypriots, through which more than 380 million euros ($417 million) have been allocated to date. This money has been channeled to actions such as infrastructure, scholarships and support for small- and medium-sized enterprises. In addition, emphasis is being given to projects that benefit both communities. The Committee on Missing Persons has been allocated 14.7 million euros. The EU also supports demining actions with a budget of 11.5 million euros over the past seven years. Finally, the EU has channeled more than to 4 million euros toward the preservation of Cypriot cultural heritage.

DS: Are there any changes in the Cyprus policy of the EU?

GM: There have been no changes regarding EU policy toward Cyprus. The EU encourages a Cyprus settlement that allows the country to play its full role as an EU member while respecting the EU's basic founding principles of democracy, the rule of law and human rights. The EU has given its strong support to the resumption of Cyprus talks under the auspices of the U.N. We have made clear our readiness to help. We support the efforts of the U.N. envoy, Espen Barth Eide. It is time to find an adequate answer and to give support to both communities.

DS: The troika's measures are angering most Cypriot citizens, can you elaborate on this?

Cyprus was in a difficult economic situation. It asked for help from the EU and it got it – the EU showed solidarity with a loan of 9 billion euros.
The Economic Adjustment Program for Cyprus is an agreement between European and international institutions and the Cypriot government. Policies, reforms and measures included in the program aim to enhance the financial, economic and, ultimately, growth prospects of the economy; and these are the outcome of an effective cooperation between the institutions and the Cypriot authorities. Let me stress that, so far, these very measures implemented over the last two years have been bearing remarkable fruit in stabilizing the financial sector, correcting fiscal imbalances and bringing Cyprus back to a positive growth path. Back in March 2013 when the program was launched many were questioning the feasibility of its objectives. Here we are now witnessing serious progress and favorable results. This is good news to me, but more importantly, to Cyprus. Moreover, according to the latest Eurobarometer data, 98 percent of Cypriots believe that the country needs reforms. Well, that's what the program is all about: reforming vital sectors of the economy so that it can get back on a sustainable path and create new jobs. Cyprus, however, is not out of the woods yet, and full commitment to its reforms agenda is essential. The Cypriot authorities have shown and publicly expressed determination to continue abiding to their commitments, and I trust that current challenges will be swiftly and timely addressed with a view to conclude the program successfully.

DS: As a representative from the European Commission, can you elaborate on the Kurdish reconciliation process in Turkey? There is a call for the PKK to lay down its arms. What is your view on this?

GM: The EU has been supportive of finding a political solution to the Kurdish issue and supports the peace process. On various occasions, high-ranking EU officials encouraged all parties to make efforts in the process to bring peace and prosperity for all citizens of Turkey. The outcome should not only allow for peace and reconciliation, but also help further democratization and economic development of the country. The EU, on several occasions, has called on Turkey to revise its Constitution and amend its anti-terror legislation to broaden fundamental rights and improve the human rights situation. Such steps would influence the ongoing peace process in a positive direction. The PKK is designated a terrorist organization in the EU. A political solution cannot be reached in an environment of violence under threat of arms. Our expectation is the PKK's disarmament and demobilization as a result of political negotiations during the peace process.

DS: The Cyprus problem and solution has created a certain fatigue in the international arena. Is it possible to have a lasting solution on Cyprus? When do you think talks should begin?

GM: The EU is tireless on the Cyprus issue. Discussions should begin as soon as possible. Indeed, the need for a rapid, comprehensive settlement on Cyprus between the Greek Cypriot and Turkish Cypriot communities has never been more pressing. The leaders of the two Cypriot communities showed courage and vision in agreeing to their Joint Declaration of February 11 to re-launch settlement talks. In September they committed to accelerating the pace of the talks. So, as Commissioner Johaness Hahn said last November at the European Parliament, we urge both community leaders to find a way back to the negotiating table and to resume substantial, structured negotiations at the earliest opportunity, paving the way to a fair, comprehensive and viable Cyprus settlement to the benefit of all.

DS: How do you elaborate the position of the Turkish government's policies and moves on the way to EU membership?

GM: The goal of full membership as stipulated in the Council Conclusions and the open-ended character of the negotiations provide the framework for the accession process. We continue to encourage the efforts to advance the accession process and enhance cooperation to the benefit of both the EU and Turkey. The EU perspective has without doubt shaped and driven positive reforms decided by the citizens and governments of Turkey, reforms that have transformed the country since it became a candidate for accession. We acknowledge the positive efforts accomplished in many areas. We welcomed the Turkish commitments made in their European Union Strategy and Action Plans. We look forward to the Turkish government's determination to translate them into deeds in the areas related to the rule of law and fundamental rights in particular.