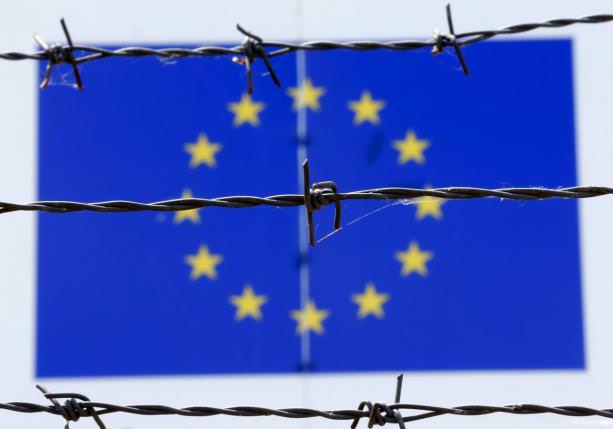 A barbed wire is seen in front of a European Union flag at an immigration reception centre in Bicske, Hungary June 25, 2015. (REUTERS Photo)
by Daily Sabah with Reuters Nov 23, 2015 12:00 am
Upon the invitation of European Council President Donald Tusk on Sunday, Prime Minister Ahmet Davutoğlu will attend the summit on refugees and bilateral issues between Turkey and European Union officials expected to be held on November 29.

Meanwhile, a senior EU official stated Monday that EU leaders are planning to hold a refugee summit with Turkey in Brussels on Sunday, November 29.

"It is not 100 percent sure yet, but there is a positive recommendation from the Commission for a summit this coming Sunday," the EU official said.

"There is a deal between Turkey and the Commission about reinvigorating Turkey's EU accession talks and at the same time stemming migration flows to Europe," the official added.

European Council president Donald Tusk, who chairs meetings of EU leaders, was ready to call the summit, a second official said, but needed to discuss the issue with Turkey.

A possible decision was more likely on Tuesday, the official said.

European Union leaders agreed on Nov. 12 to hold a summit in Brussels with President Tayyip Erdoğan once an agreement on stemming migration flows was finalized.

Tusk also said at that time that it was almost certain to take place in November. Since then officials and diplomats have said negotiations continued.

More than 650,000 of the 800,000 refugees who have reached European Union countries by sea this year have left from Turkey, which is home to two million refugees from neighboring Syria and other countries in the region.

As a neighbor of Syria, Turkey worries that around 2 million more refugees might come to Turkey in addition to those who are already here, which will mean a total of 4 million Syrian refugees could be accommodating in Turkey.
Last Update: Nov 23, 2015 10:25 pm
RELATED TOPICS