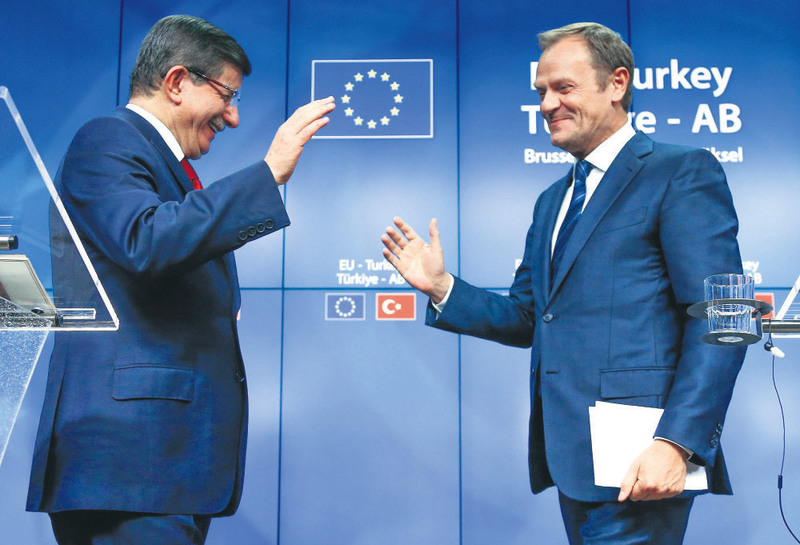 Prime Minister Davutou011flu (L) and European Council President Tusk greet each other after a news conference following a EU-Turkey summit in Brussels on Sunday.
by Yunus Paksoy Dec 01, 2015 12:00 am

Following months of discussions over whether the EU will be able to lure Turkey into a deal with several concessions, both sides on Sunday agreed on a deal. The deal will see the Turkish side receive 3 billion euros and visa liberalization as well as the opening of several chapters in exchange for a readmission agreement and better border controls

Having sheltered more than 2 million refugees fleeing the war in Syria and spent nearly $8 billion on them over the past four years, Turkey now has the European Union by its side with the 28-nation bloc willing to provide 3 billion euros in aid. Ankara will also see its demands met by the EU, namely visa-liberalization for Turkish citizens and accelerated accession talks, should it curb the migration flow to the EU zone. Prime Minister Ahmet Davutoğlu was all smiles and expressed his satisfaction with the summit: "Today is a historic day. [EU] relations with Turkey including the accession process will be re-energized." Davutoğlu also stressed that the summit came at a good time and will offer new opportunities to all leaders.

"I would like to give a loud and clear message from Ankara: We are a European society. The fate of the continent is the fate of all of us. Turkey is ready to do everything possible in this regard," Davutoğlu said, adding that Turkey will be willing to address every single crisis as a family member of the EU.While Davutoğlu welcomed the EU's concessions such as visa-free travel for Turks and accelerated accession talks, European leaders had one thing in mind: the financial aid package for Ankara and how effective it would prove to be. Underscoring that the money is not for Turkey but for Syrian refugees, Davutoğlu said that the ultimate goal is to prevent human smuggling and curb the number of refugees entering the EU zone.

With regard to the financial aid, German Chancellor Angela Merkel said: "Turkey is right to expect that the EU provides relief." She added, however, that the EU will not be simply writing a blank check to Turkey.

French President Francois Hollande also commented on the financial aid, saying: "As Turkey is making an effort to take in refugees -- who will not come to Europe -- it's reasonable for Turkey to receive help from Europe to accommodate those refugees."

European Council President Donald Tusk hailed the summit and called Turkey a "key partner" of the 28-nation bloc. "After many weeks of hard work…we have reached an agreement which I hope will be accepted by all parties concerned," Tusk said, urging the abstaining EU member states to show support for the deal. Tusk also stressed that it is the EU's duty to protect its borders and the EU does not expect any other party to do so.

VISA LIBERALIZATION PROCESS AND OPENING OF CHAPTERSAs one of Ankara's main requests from the EU, visa-free travel for Turkish citizens took significant priority at Sunday's summit. Having said that visa liberalization must be secured for a deal, Ankara sat at the table with EU officials to resolve this issue. The statement, in which both parties shared the details of the summit, envisages the EU-Turkish readmission agreement taking effect in June 2016. If Ankara fulfills what the readmission agreement requires, the EU commission will propose visa liberalization for Turkey in October 2016.

EU Commission President Jean-Claude Juncker reflected on the process, saying: "There is a correlation between the readmission agreement and visa liberalization. We will continue to analyze it together. If all conditions are fulfilled, I expect the visa liberalization to be brought to agenda in autumn of 2016."

Apart from the visa liberalization and the decision to organize two summits every year, the opening of several chapters was also a focal point. Davutoğlu said that the 17th chapter will be opened on Dec. 14. In addition, the EU commission will make all the preparations to open other chapters in the first quarter of 2016.

The EU has searched for many options to stem the flow of the refugees, yet it has apparently failed. The 28-nation bloc has now convened for the seventh time on Sunday to finally address the issue. Finding itself in a tough spot in the wake of the unprecedented refugee crisis, the EU knocked on Turkey's door.

Considered the most influential leader in the EU, Merkel paid a sudden visit to İstanbul and tried to convince Davutoğlu to accept the EU's offer. Having witnessed a significant drop in approval ratings, Merkel and other European leaders have opted to embrace Turkey.

It still remains a question if Turkey's demands will be fully met and if it will be successful in stemming the influx of refugees. One thing seems to be obvious: Turkey has accommodated over 2 million refugees and continues to do so. Obstacles that might be put in Turkey's way will only worsen the crisis for the EU, Merkel and her fellow European leaders because as Turkish authorities have stressed, Turkey is not a concentration camp for refugees and cannot keep all of them.
RELATED TOPICS