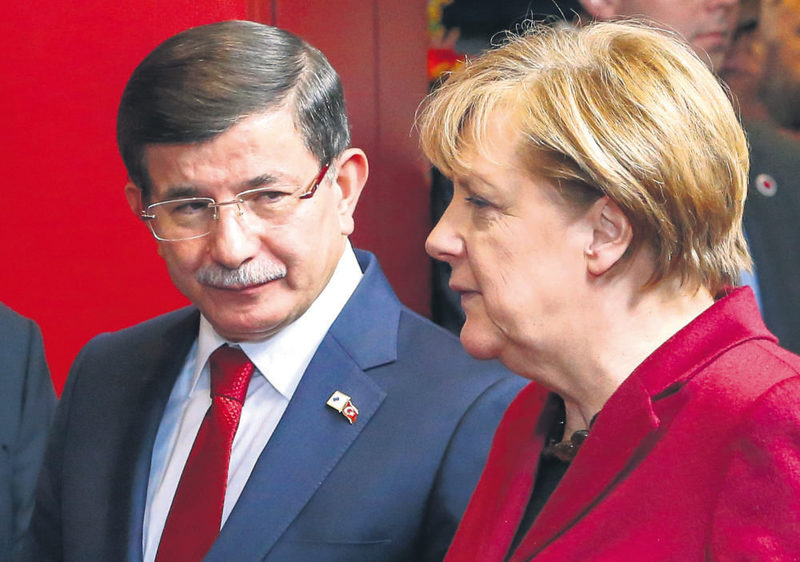 Prime Minister Davutou011flu (L) with German Chancellor Merkel at the Turkish-EU summit on Nov. 29 in Brussels where the two sides reached an agreement to collaborate in resolving the refugee crisis.
by Yunus Paksoy Dec 08, 2015 12:00 am

Even though the EU asked for Turkey's collaboration in addressing the refugee crisis in exchange for concessions such as visa liberalization and opening of several chapters, German Chancellor Merkel's CDU and coalition partner CSU still seem to be willing to raise difficulties for Ankara on its path to full membership

In spite of the unprecedented refugee influx that has profoundly affected Germany recently and the agreement between the EU and Turkey to accelerate the membership talks, German Chancellor Angela Merkel's Christian Democratic Union of Germany (CDU) still seems to be retaining opposition toward Turkey's full EU accession process, with new suggestions looming such as a privileged membership. CDU Parliamentary Group Vice Chair Thomas Strobl spoke to the German daily Die Welt and ruled out Turkey's full accession to the EU, saying: "I can imagine that we can offer Turkey an equally close economic collaboration just like the one the EU maintains with Norway and Switzerland. That is a lot, but no full membership."

German Chancellor and CDU Chair Merkel has long been negative about Turkey's full membership to the EU as well. Back in February 2015, Merkel said: "My approach towards the full membership of Turkey is rather skeptical." Following the influx of refugees marching towards the EU, Merkel changed her tone and paid a sudden visit to Istanbul in October and offered Turkey several concessions. The visit was interpreted as a desperate move by many.

Strobl also contended that a Norway-model could be the right solution for Turkey. Despite not being a full family member of the EU, Norway is commercially integrated into the 28-nation bloc's market.

With regards to the visa liberalization process for Turkish citizens, which is a crucial and an essential point on Ankara's agenda, Strobl argued that Turkish business people, who have had years-long relations with EU member states, can be relieved of the visa obligation.

Aside from visa-liberalization for Turkish business people, the question of what German politicians make of common Turkish citizens traveling visa-free to the EU was answered by both CDU and Christian Social Union (CSU) figures. A CSU politician and one of the vice presidents of the Bundestag, Johannes Singhammer hailed the EU's decision to stall Turkey's bid to grant visa liberalization, saying: "The EU has always refused the removal of visa requirements for good reasons." CDU member Wolfgang Bosbach also expressed his concern about potential visa liberalization. He suggested the number of people that would immigrate to the EU could sharply increase.

Even though German politicians seem to be in agreement over the refusal of allowing Turkish citizens to travel visa-free to EU member states, a deal between Brussels and Ankara that was agreed at a summit on Nov. 29 envisages a certain date for it: October 2016.Merkel, despite not favoring Turkey's full accession process and visa liberalization for Turks, may have to try to convince her fellow party members and coalition partners in the upcoming days. The chancellor's approval ratings have been in sharp decline. On top of that, it is often speculated in the German media whether Merkel can retain her position in the next term.

Speaking to Daily Sabah on the issue, Kemal Öztürk, a columnist for the Yeni Şafak daily, rebuked the EU and Angela Merkel and labeled them as "incompetent." Pointing to arguments inside the EU whether to offer Turkey partial visa liberalization or to open several chapters, Öztürk said: "The EU does ridiculous things and it is incompetent. It cannot do politics well or produce policies. Its ineffective policies in the Middle East, Iran, Iraq and Syria gave the U.S. and Russia a chance to interfere."

Underscoring that Germany and France have always opposed Turkey's full accession process, Öztürk said that there would have been no summit or improvement in Turkish-EU relations without the refugee crisis or Merkel would not have visited Istanbul. "It all started because the EU was in need. There is the problem of a lack of leadership in the EU," he said.

"Merkel said the EU cannot solve the problem without Turkey and she cannot stand behind her statement. The EU's policies are so inconsistent," Öztürk added. He also argued that the EU's unsuccessful fate will continue so long as it cannot grasp the situation.

Responding to claims that the number of people who would be willing to migrate to the EU would increase, Öztürk said: "Given the high number of EU citizens joining DAESH, one can say that people are not comfortable where they live. If a survey were conducted in Turkey now, at least 70 percent say they would prefer not to live in the EU. [And] It is all due to the EU's policies."

Also speaking to Daily Sabah on the matter, Robin Alexander, a political reporter at the German daily Die Welt, ruled out any possibility for Turkish citizens to travel visa-free to the EU in the near future. "Total visa liberalization is unrealistic," Alexander said.

Alexander argued that visa liberalization will be granted to Ankara, yet he cast his doubts on the details of it. "For whom? and How extensive? Plus it is certainly not the only matter for Turkey in the negotiations with the EU," he added.
RELATED TOPICS