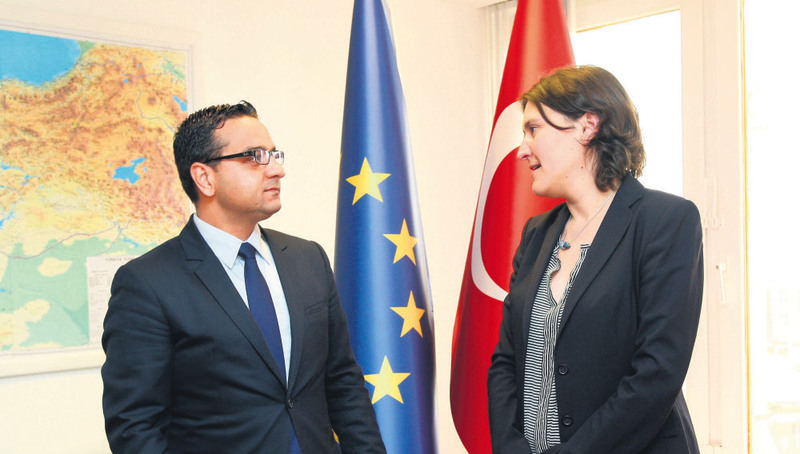 Turkey's new government is expected to announce a road map for EU reforms on Friday. When asked whether she is convinced by the new government's determination to implement the EU reforms, Piri said that it is good to see new ambition within the new government but stressed that they need to wait and see the reform as it is implemented. "My hope is really that, under these terms where the European Commission is concerned, the European Parliament will be able to say that we see things heading in the right direction with the new government, in the coming months. Thus, this is my hope, this is why I'm here and this is why I am engaging in dialogue with the concerned ministers." Underlining that visa liberalization is a key issue for Turkey, Piri also drew attention to potential delays which depend on Turkey's performance ability to achieve the desired 72 requests for visa free travel in Europe for Turkish citizens. ''I really want to make sure that we can get to that phase by October. But we must also be frank in that there are 72 requirements to be met. I mean, it is coming but the anticipated date can be no earlier than October. It could even be a few months later than that.,' she added

The EU will open Chapter 17 for negotiations on Dec. 14 after a two-year hiatus. Beside this, Turkey is expecting to open five more chapters in the first half of 2016. Commenting on this issue, Piri reminded Turkey that these chapters have been blocked due to the Cyprus issue and it might be possible to open these chapters if Turkish and Greek sides will reach a compromise on the reunification of the island. "I am very positive regarding this issue. Perhaps now is the biggest opportunity ever to solve it. If a positive conclusion comes, many chapters could be opened. And these chapters are, of course, very logical when you look at their relationship, these are very strategic chapters to open. This is an Energy and Foreign Affairs issue but it is also at the core of the accession process, rule of law and the freedom of expression, which were also some concerns voiced by the EU," she said.

Addressing comments which suggest that the yearly Turkey Progress Report includes some unrealistic and unfair criticism, EP rapporteur Piri said that she is happy to hear criticism from Turkey's side as well as the claims that some of the criticism in the report is "unfair." "We will take these responses into consideration and look into it further. If I reach the same conclusion regarding this alleged unfair criticism, I won't put it in my report," she added.

Touching upon the letter that she sent to European Commission (EC) head Jean-Claude Juncker which calls on the EC not to delay the release of Turkey's progress report, Kati Piri underlined that, prior to the elections, she does not want to give any government the impression that Europe is trying to retract its criticism. "I would have said the same if this were to have happened before the Serbian elections. The progress reports are technical reports which should not be made political by postponing it," she added.
RELATED TOPICS