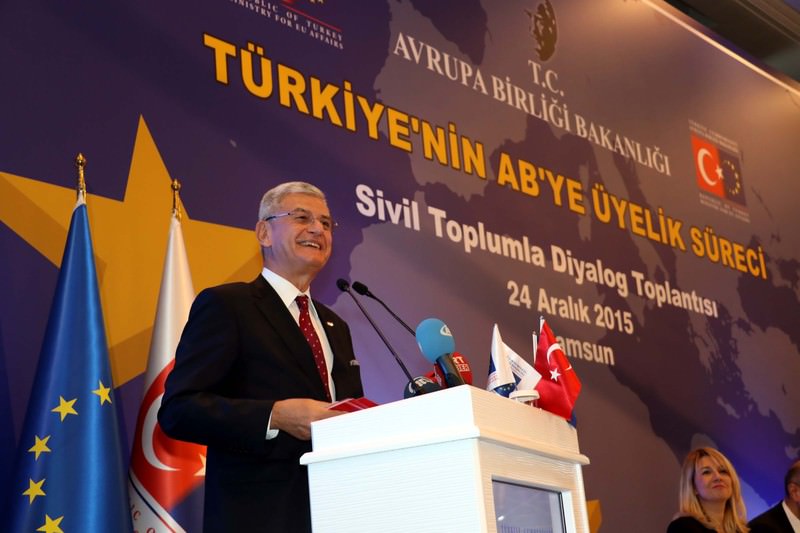 by Daily Sabah Dec 25, 2015 12:00 am
Speaking at a civil society dialogue meeting on 'Turkey's European Union Membership Process' in the northern Samsun province on Thursday, Turkey's EU Minister and Chief Negotiator, Volkan Bozkır said that an agreement was made with the EU on visa liberalization for Turkish citizens starting from October 2016.

"An agreement was reached on visa liberalization and hopefully in October this year Turkish citizens will be able to enter without visas to countries in the Schengen area," said Bozkır.

Touching upon the importance of civil society in democracies, he said "Civil society is the basis of democracy. But unfortunately, Turkey has gone through a period when this basis was not given enough importance; for example, we had only about 50 non-governmental organizations in the early 1980's."

"But today, we have over 108,000 NGOs. We are very proud to have the biggest number of NGOs in the history of the Republic of Turkey and further wish to have more," Bozkır added.

The minister also touched upon the recent developments on Turkey-EU relations and resources provided by the EU to Turkey. Bozkır stated that, between 2016 and 2020, 190 million euros of civil society fund will be provided by the EU.

Bozkır highlighted that with the official opening of Chapter 17 on monetary and economic policy, Turkey seeks to gain further momentum in talks with the EU.

Marking a first in two years, chapter 17 is the first chapter to be opened in a total of 35 chapters, only 15 of which have been opened for Turkey.

Previously, European Council President Donald Tusk and European Commission President Jean-Claude Juncker had agreed to speed up the implementation of the visa-free system for Turkish citizens to the Schengen zone on Nov. 17.

However the head of the European Union Delegation to Turkey, Hansjörg Haber, had said on Nov. 20, a system for visa-free travel between the EU and Turkey is planned to start in 2018, and possibly in 2017, if everything went according to plan.

In December 2013, Turkey and the EU had signed an agreement on a visa liberalization dialogue in parallel with a readmission agreement that would result in illegal migrants who enter the EU from Turkey being returned to Turkey. Ankara had pressed for on a synchronized step for both the readmission and Schengen visa agreements.