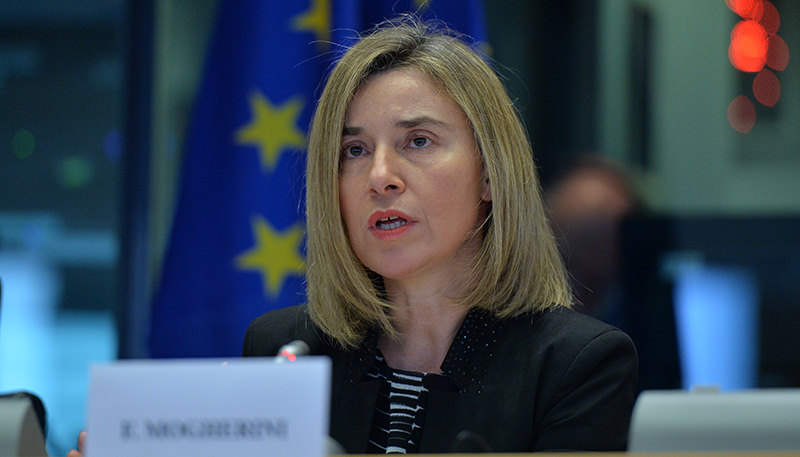 | AA Photo
by Daily Sabah with AA Feb 23, 2016 12:00 am
EU foreign policy chief Federica Mogherini has said the bloc opposed the formation of a separate Kurdish state in the Middle East.

"The European Union does not support any separatist agenda for the Kurds - be it in Turkey, be it in Iraq, be it in Syria," Mogherini said at the European Parliament in Brussels on Tuesday.

Mogherini reiterated the EU's condemnation of violence by the PKK following an attack in Ankara that killed 29 people last week.

"The European Union condemns in any possible way any terrorist act and considers the PKK as a terrorist organization," Mogherini said.

"We also believe, as united as we are in condemning terrorist acts, that the way to solve the Kurdish issue inside Turkey is through a peace process that the same Turkish government started a few years ago before dropping it," she said.

What is commonly known in Turkey as the "reconciliation process" aimed to end the 30-year conflict between Turkey and the PKK, considered a terrorist organization by Turkey, the EU and the U.S. It began in 2013 but stalled after renewed violence broke out last year.

"We continue to think this is the way and we say this to the Turkish authorities and to the Kurds equally," Mogherini said.

Mogherini said the crisis will not be solved unless the rights of Kurds are respected.

"We need to make sure that rights are respected by the Kurds and for the Kurds. Most of all, it cannot be possible to make it out as if this was not an issue in the region - it is," she said.

EU officials have repeatedly called on all parties in Turkey to recommit to the reconciliation process, the attempt to end the 30-year conflict that stalled after renewed violence broke out last July after the PKK ended the cease-fire. Turkey and the EU agreed to a refugee action plan last year under which the bloc would provide Turkey with 3 billion euros in aid to meet the needs of Syrian refugees in exchange for visa liberalization and speeding up accession. Fifteen chapters, including the latest on economic policy, have been opened out of a total of 35 that must be completed in order for Turkey to join the 28-member bloc.
Last Update: Feb 24, 2016 4:23 pm
RELATED TOPICS