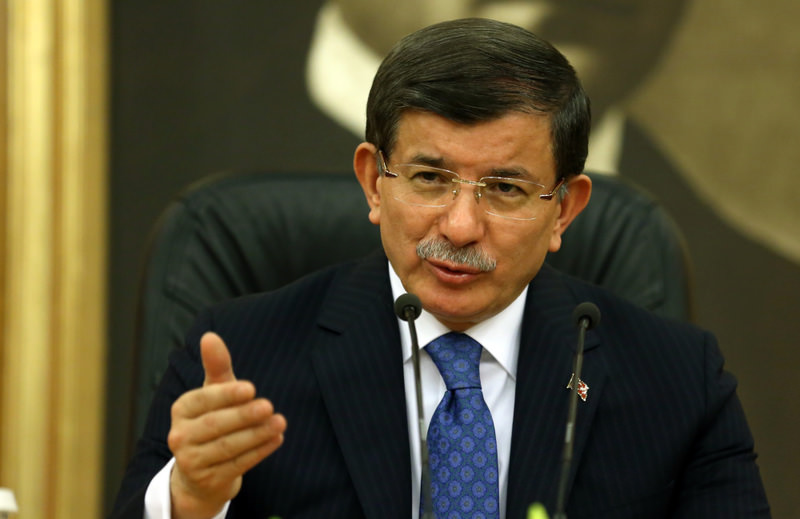 Speaking shortly before his departure to Brussels, Prime Minister Davutoğlu underlined the importance of simultaneous cooperation and said no one should expect the flow of refugees to fully stop before taking in refugees from Turkey

Prime Minister Ahmet Davutoğlu, speaking at Istanbul's Atatürk International Airport yesterday before his flight to Brussels to attend today's summit with 28 EU heads of state and government, said both Turkey and Europe should take immediate and concurrent action to address the refugee problem caused by the Syrian crisis, describing some European leaders' call that Turkey should take action first as wrong. Answering journalists' questions at Istanbul's Atatürk International Airport prior to his flight to Brussels, Davutoğlu said Turkey has done whatever is necessary regarding the refugee crisis and will continue to do so because it is a "humanitarian situation."

Explaining that today's meeting will mainly concern refugee quotas, Davutoğlu said: "Saying that first the flow of refugees should stop, is beyond anyone. It is a humanitarian issue. We have done whatever is necessary, are still doing it and will continue to do so. The significant thing is that awareness [of the issue] in Europe is on the rise." Davutoğlu stressed that there are things that fall on the shoulders of the two sides and Turkey has taken significant steps in this regard. "Because the crisis in Syria continues to escalate, the number of refugees has not declined drastically, but there is a decline. We will lay the base for our projects in the upcoming weeks," he said. Explaining that the EU has to send Ankara notice about the 3 billion euros of aid and refugee quotas, Davutoğlu said: "Even though it is not fair and appropriate, Turkey can handle it alone."

Explaining that the EU has to send Ankara notice about the 3 billion euros of aid and refugee quotas, Davutoğlu said: "Even though it is not fair and appropriate, Turkey can handle it alone." The EU is expected to give notice about how many refugees it will take from Turkey.

Turkey and the EU have been intensifying efforts for mutual understanding and consensus on the refugee and migrant issue. Beginning the dialogue with German Chancellor Angela Merkel's visit to Istanbul in mid-October to hold meetings with President Recep Tayyip Erdoğan and Prime Minister Davutoğlu, the two sides agreed on a deal in late November.

Ankara and the EU agreed to a refugee action plan at a summit in Brussels on Nov. 28. The main aim of the deal for the EU was to drastically curb the flow of refugees arriving from Turkey, and Ankara pledged to reduce the number of refugees and ease the EU's concerns to a certain extent. It will, in return, receive 3 billion euros in financial aid and several concessions over the course of its EU accession process.

Visa liberalization is also a significant step for Turkey in the deal. Turkish citizens will be able to travel visa-free to the Schengen zone as early as October or November 2016 if Ankara does its part.

A readmission agreement between Turkey and the EU will go into effect in June. When the deal is implemented, the EU will have the ability to return illegal migrants to Turkey in order to be processed before they are sent back to their countries of origin. A commission made up of representatives from the two sides will have to determine that the migrant definitely traveled to the EU from Turkey. If it cannot be proven that a migrant came from Turkey, Turkey will not necessarily have to readmit them, according to the deal.

Elsewhere, EU Minister and Chief Negotiator Volkan Bozkır on Thursday warned that Ankara has the right to cancel the readmission agreement if the bloc does not grant visa-free travel to Turkish citizens as pledged. He also shared the aforementioned details of the return process for refugees.

"For each person, a file will be sent, including the name and identity, and documents that show that the person went to Europe from Turkey," Bozkır said. "Then, a commission in Turkey will examine these cases, and if this commission admits, these illegal migrants will be sent to Turkey," he added.

Monday's summit will aim to strike an effective deal to give the agreement its latest shape. Shortly before the summit, EU Ambassador to Turkey Hansjörg Haber harshened his tone on Ankara, saying it has to drastically reduce the number of refugees illegally trying to cross the Aegean to Greece, otherwise visa-liberalization will not take place, he warned.

The EU has been struggling to find a common solution for itself as well. In addition to the chaos along the Greek-Macedonian border where thousands of refugees are stranded, Austria has been creating problems for the 28-nation bloc with its border policy. It announced that it will allow only 80 asylum seekers into the country per day and let more than 3,000 of them through its borders to other countries. Germany and some Balkan countries strongly oppose the policy and urge Austria to step back from its decision.

A draft plan to provide 700 million euros to member states struggling to cope with the refugee crisis has been proposed by the European Commission. Greece is expected to receive the biggest share of the funding, as the country is faced with a huge number of refugees when compared to other member states. Some 300 million euros of the funding will be contributed this year while other 400 million euros will be allocated in the next two years in two installments.
RELATED TOPICS