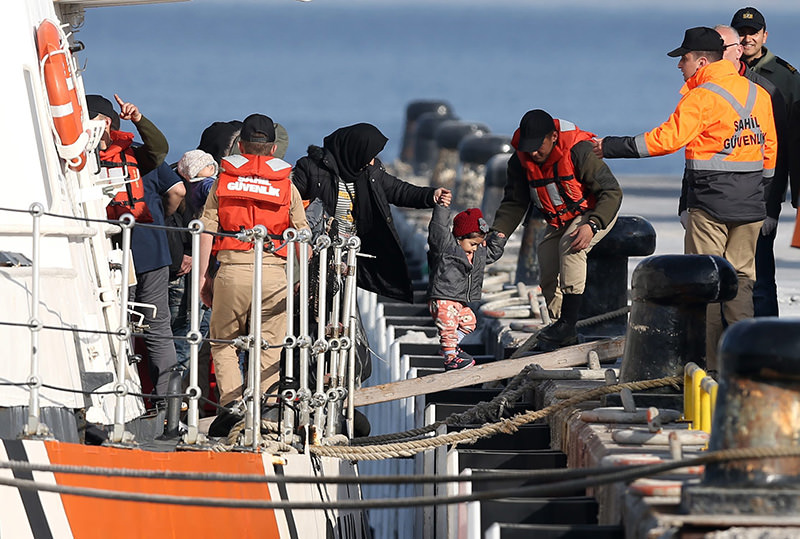 As the first irregular migrants were returned to Turkey from Greece starting on Monday, officials from parties of the migration agreement between the European Union and Turkey stated that the deal has started to show significant results.

In a joint press conference with his Finnish counterpart Juha Sipilä that took place during an official visit to Helsinki on Wednesday, Turkish Prime Minister Ahmet Davutoğlu said the number of illegal migrants arriving in Greece from Turkey in a day had fallen to 350 in the last two days, which shows that the readmission agreement between the European Union and Turkey to try to stem the flow was working. According to Davutoğlu, this number was around 6,000 in October.

In the first day of the agreement, 200 illegal migrants were readmitted by Turkey, Davutoğlu said, and an equivalent number of refugees were sent to Germany, the Netherlands and Finland. He said that he has not seen any problems on the Turkish side and he believes that Greek and EU authorities are doing their best to implement the agreement.

The European Union's top migration official said on Wednesday a deal with Ankara on refugees was beginning to have an effect and would eventually be scaled up, after the first irregular migrants were returned to Turkey this week.

"We are still at the beginning, the numbers are very low," EU Migration Commissioner Dimitris Avramopoulos told a news conference. "But it's better to start working slowly. I believe in the course of time we will scale up... It's a good start."

Commissioner Avramopoulos was in Ankara earlier this week to demand that Turkey introduces legal protection for asylum-seekers before the EU began sending them back. The Greek diplomat said that was still indispensable for larger-scale returns to start.

Avramopoulos was joined by German government spokesman Steffen Seibert on Wednesday, who said the first few days of the implementation of the deal aimed at stemming the flow of refugees to western Europe indicates that things are going in the right direction.

"We have not achieved everything yet but the first few days have shown that developments are heading in the right direction," Seibert told reporters at a regular government news conference.