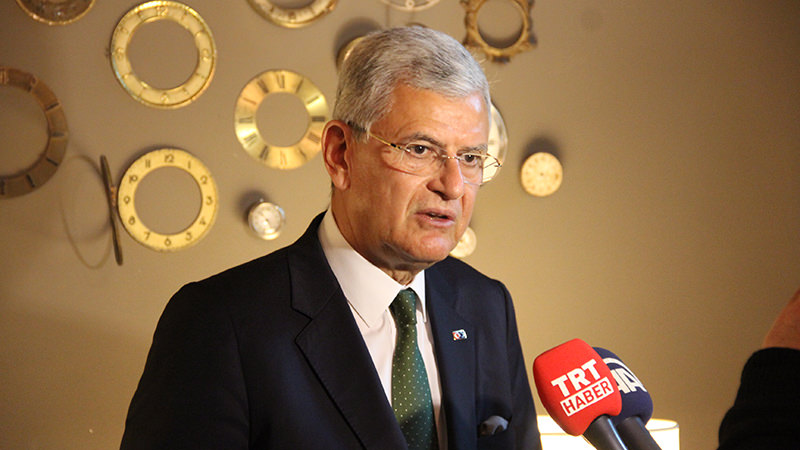 While relations with the European Union gained new momentum after the signing of the EU-Turkey Joint Action Plan in 2015, the European Parliament's (EP) 2015 Turkey progress report released on Thursday is expected to overshadow the closer relations due to its persistent aim to recognize the 1915 Armenian incidents as genocide. Commenting on the report, Turkey's EU Minister and Chief Negotiator Volkan Bozkır said Thursday that the report is unacceptable and will be returned unopened.

The EP approved Turkey's 2015 progress report for the EU membership process on Thursday, passing the report with 375 votes in favor to 133 opposed and 87 abstentions, praising Turkey's efforts to address the refugee crisis and for "hosting the biggest refugee population in the world."

Last year's EP progress report on Turkey was also declared null and void by the government due to its inclusion of the historic 1915 events, which it referred to as the Armenian genocide. Bozkır told the press on Wednesday that Turkey previously warned that the new report would be returned if statements from the previous year were repeated. Regardless of the Bozkır's remarks and ministers of Parliament expressing their disapproval of the draft, the final progress report "calls on Turkey to recognize the Armenian Genocide."

To express disapproval for the draft EP report, which refers to the 1915 incidents as genocide, the co-chairman of the Turkey-EU Joint Parliamentary Committee, Ahmet Berat Conkar, and EU Harmonization Committee Chairman Mehmet Kasım Gülpınar as well as various deputies emphasized in a letter that they have tried to utilize balanced and fair criticism taken from previous progress reports while also stressing that the inclusion of the EP's resolution on the centenary of the 1915 events in last year's progress report was an unfortunate occurrence.

Commenting on the report by EP Turkey Rapporteur Kati Piri, Bozkır said: "The EP report reflects the EP's views regarding EU Commission progress reports about EU member countries and Turkey. Last year, we said we would reject the report if it included elements that are not acceptable for us." Bozkır also pointed to three key sticking points for Turkey that would result in the report being declared null and void, including reference to any expression referring to the Armenian genocide as well as any request that the PKK terrorist organization be removed from the EU's list of terrorist organizations. "The final matter is the inclusion of statements that aim to slow down or suspend Turkey's EU accession process or cut off funds provided for Turkey's EU accession process," Bozkır said.

Furthermore, the report praised Turkey for hosting the largest refugee population in the world, noting that it remains a "key strategic partner for the EU." The report states that "the EU-Turkey Joint Action Plan on refugees and migration management should be implemented immediately, but only as "part of a comprehensive cooperation agenda based on shared responsibility, mutual commitments and delivery." "As the report welcomes progress made in the Cyprus reunification talks, it urges both parties to implement all agreed upon measures without further delay, noting that such non-settlement of the Cyprus issue affects the development of EU-Turkey relations," the report said.