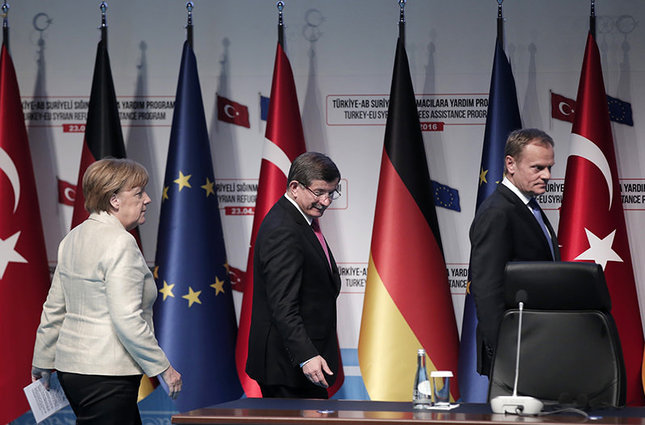 Amid Ankara's efforts to meet all 72 conditions for visa-free travel to the EU, a European Commission spokeswoman opposed the proposal drafted by Germany and France seeking easier suspension and said there is no intention to propose a revision of the regulation

Amid repercussions of a German and French proposal that seeks tougher restrictions, a European Commission spokeswoman said yesterday that the current regulation for nationals of some countries eligible for visa-free travel to the EU's Schengen zone already includes a general suspension clause. The spokeswoman opposed the proposal to widen the ability to suspend visa-free travel: "The commission currently has no intention of proposing a revision of the existing suspension mechanism."

Germany and France drafted a proposal this week for a tougher safeguard mechanism in case of a spike in asylum requests, overstays or readmission refusals. According to the draft, which needs to be passed by the European Commission, any member state would have the right to suspend visa-free travel from any country for six months unless overruled by a qualified majority. Ankara, which is in efforts to finish meeting all the EU benchmarks for visa liberalization, has insistently reiterated that it will take nothing into consideration other than the agreed deal. Under the EU-Turkey deal, Turkey is readmitting all migrants and refugees, including Syrians, who enter Greece illegally from the country in return for the EU taking in Syrian refugees directly from Turkey on a one-to-one basis.

In return, visa liberalization will be implemented for Turkish citizens by the end of June along with accelerating the opening of new chapters in Turkey's EU accession process and 3 billion euros of financial aid to Ankara to spend on Syrian refugees in Turkey. There are 72 conditions Turkey must meet to qualify for visa-free travel, and the European Commission will report next Wednesday whether Turkey has met them all. All EU member states and European Parliament have to approve the plan.

EU Deputy Minister Ali Şahin told Daily Sabah on Thursday that it is unacceptable for Turkey to accept proposals that are not in the signed migrant deal, adding that Parliament is working around the clock to pass the necessary bills to meet all EU benchmarks for visa liberalization.

"Everything will be ready before May 4. We will have no drawbacks then," he said. He also assured yesterday that legislation to meet the European Union criteria to lift the Schengen zone visa requirement should be completed on Monday.

Presuming that EU citizens may also want to flock to Turkey once visa requirements are lifted between member states and Turkey, Şahin said: "We also hear concerns from our citizens. I was in Bingöl, and a citizen approached me and said he was concerned about Europeans coming to Turkey. … Should we also put forward preconditions?" Şahin asked.

As Ankara awaits the European Commission report on May 4, Ankara has continuously warned the 28-nation bloc that Turkey will end the migrant deal if visa liberalization is not granted.

Prime Minister Ahmet Davutoğlu said on Tuesday that the deal could be implemented together with visa liberalization. "We are waiting for the European Union to do what falls on its shoulders and complete the judicial process without putting forward any political excuses regarding visa liberalization," he said, adding that if it does Ankara will not keep its side of the bargain. President Recep Tayyip Erdoğan also warned the EU. "Turkey will not implement the Turkey-EU deal on stemming the illegal flow of migrants to Europe unless the 28-nation bloc fulfills its side of the agreement," he said in a speech at the Presidential Palace on April 7.

Speaking on live television on Thursday, EU Minister and Chief Negotiator Volkan Bozkır also said that there are no obstacles in the way of visa liberalization and that both sides have been fulfilling their responsibilities under the EU-Turkey migration deal. "If all goes well, we expect a decision recommending the lifting of visa requirements on Tuesday," he said, and added that he expects visa liberalization to go into effect by June. Turkey has already achieved considerable success in reducing the number of people crossing from Turkey to Greece. Greek Prime Minister Alexis Tsipras as well as a European Commission report said the implementation of last month's agreement to curb migration had made progress. Tsipras said last week defended his government's support for the deal. "A few months ago we had flows of 3,000 to 4,000 daily to our islands. ... Today, the flows are about 50 to 60 daily," Tsipras told Greek parliament during a debate on security.

Share on Facebook Share on Twitter
Previous in EU Affairs Prime Minister Ahmet Davutoğlu said on Thursday evening that there... Next in EU Affairs As Turkey-EU relations continue to improve with the recent migrant...
DAILY SABAH RECOMMENDS