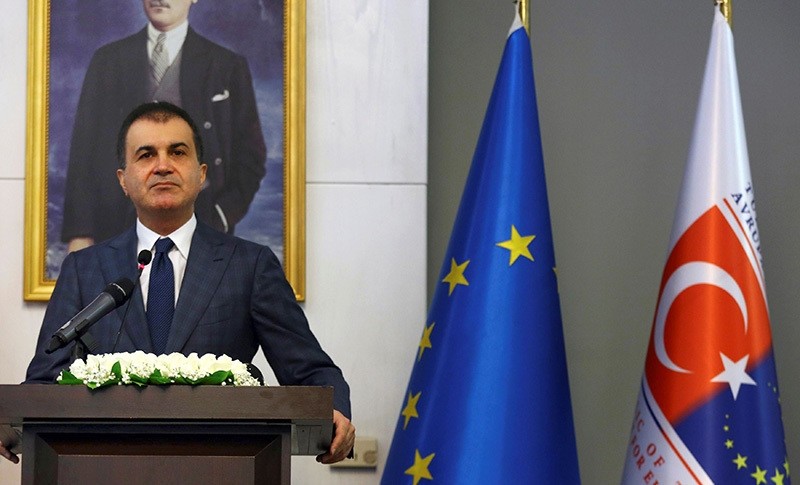 With the future of visa-free travel to the EU's Schengen Zone for citizens of Turkey unresolved due to Ankara and Brussels exchanging ultimatums, newly appointed EU Minister and Chief Negotiator Ömer Çelik paid his first official visit to Brussels where he announced on Wednesday to the media that a road map had been determined during talks with European Commission First Vice President Frans Timmermans on May 27 in Antalya. He said that a group of technical experts would arrive in Turkey today, June 2, to examine the visa liberalization process. Prefacing that the level reached in Turkish-EU relations is due to President Recep Tayyip Erdoğan, Çelik said that reforms in this regard were conducted in line with Erdoğan's leadership.

Although Brussels says the deal will succeed, it also insists that Turkey meets the EU's 72 benchmarks, which include narrowing its counter-terrorism laws, which has received much criticism from Turkish officials.

Çelik reiterated that Turkey couldn't be expected to narrow its counter-terrorism laws under the current circumstances in which terrorist organizations such as DAESH, the PKK and the Revolutionary People's Liberation Party Front (DHKP-C) pose threats to security and citizens.

Speaking at a press conference, Çelik said that the EU project is one of the fundamental matters in Turkey's politics and that Turkey has no issues concerning reform decrees. "Realizing the visa liberalization as Turkey has requested is exceptionally significant," he said. Providing details of his meeting with Timmermans in Antalya, Çelik said: "We discussed what could be done for the two criteria left out of the 72 requirements. We determined a road map that includes technical experts meeting in Turkey to exchange views on the matter. If it results in a meaningful portrait, [Foreign Minister Mevlüt Çavuşoğlu and I] will meet with Timmermans once again followed by meetings including President Erdoğan and German Chancellor Angela Merkel."

Emphasizing Turkey's devotion and determination to continue the Turkey-EU refugee agreement, which includes accelerating Turkey's EU membership bid and visa-free travel for Turkish nationals in the Schengen area if Turkey meets the 72 benchmarks, Çelik said it is impossible for visa liberalization talks to be excluded from the agreement, calling it inseparable. "Visa liberalization must not be perceived as a threat. The currently active mechanisms must not be disengaged, but rather must increasingly continue their momentum," Çelik said. Commenting on the requirement to amend the counter-terrorism laws, Çelik said that the laws will not be changed as Turkey expects empathy from the EU on the matter since anti-terror laws in Europe vary according to states' needs. He added that the EU must not apply a double standard for Turkey regarding the visa liberalization process.