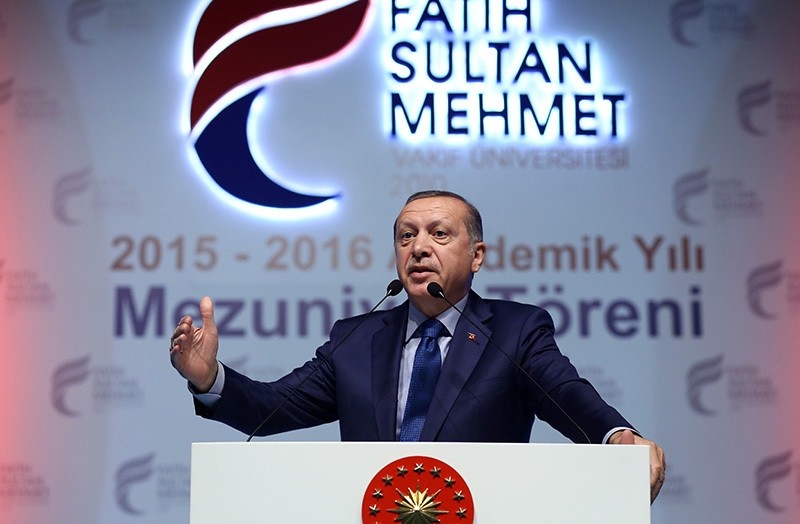 President Recep Tayyip Erdoğan on Wednesday slammed the European Union for failing to fulfill its end of the bargain regarding the EU-Turkey readmission deal, saying that Turkey may also hold a referendum to determine if they should continue with negotiations or not, while he harshly criticized the bloc for being untrustworthy.

Speaking at the graduation ceremony of Fatih Sultan Mehmet University in Istanbul, Erdoğan said that Turkish citizens are not eager for visa-free travel, and that it is the EU who is after Turkey over fears on what would happen if Syrian refugees arrive at their borders, in response to European Commission President Jean-Claude Juncker, who said earlier that Erdoğan would need to make an explanation to Turkish people if the deal fails.

"When 60,000 people gathered in Edirne, they got very anxious, and started wondering about whether all those people would cross into Bulgaria or Greece," Erdoğan said.

"But in the meantime we are hosting three million refugees. Why? Because we care about people, unlike you. You have no such concerns. All this readmission agreement and other stuff just shows how untrustworthy you all are. You are not keeping your promise'' he added.

''Britain has always expressed that it was on Turkey's side over EU membership, what happened now?'' Erdoğan asked, and continued by saying that the readmission deal has proved Europe's hypocrisy.

The president also said that the EU does not accept Turkey's accession on purpose.

''The EU does not accept Turkey's membership because the majority of our citizens are Muslims'' he said and continued by adding that they cannot prove otherwise.

He noted that one of the former French foreign ministers had told him this openly while they were having a trilateral meeting with former Prime Minister Ahmet Davutoğlu.